Hal Jordan is the scapegoat the Justice League deserves, but not the one it needs right now.

As a note, massive spoilers for the issue are discussed. 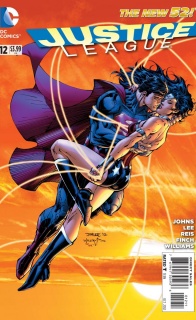 – ”THE VILLAIN’S JOURNEY” part four! – The team struggles to stay together as they try to combat their newest foe. – A shocking last page that will have the world talking about this issue!

“Justice League” is a book I’ve wanted to like since the beginning. While I could tell early on that this wasn’t the book I wanted, I was trying to be positive and give DC a little credit. This was their flagship book, with their most popular writer scripting and their co-publisher on pencils, there had to be some grand scheme that I just wasn’t seeing. When the “5 years ago” arc fell short, I wanted to believe that once the book popped into modern times, it would kick into gear.

But here we are, at the end of the first two arcs, and the book is just as much, if not more, of a mess than it was a year ago, when the first issue just basically featured Hal Jordan and Batman measuring their dicks for 20 pages.

Although this book takes place in the modern age, it is still written like it takes place five years ago. Literally none of the characters line up with their solo books, outside of Aquaman (who is as annoying here as he is there), and the series seems to paint the characters into corners that just, frankly, make no sense. All of this has been covered before, but with a year of stories, this can no longer be chalked up to just the series getting its sea legs. This is a pretty bad comic, and yet one that sells impossibly well. This is a comic that is regularly selling over 120,000 copies a month; numbers like that, matched with content like this, and I start to consider my sanity.

This issue in particular is the final piece of the arc featuring new villain David Graves. When we left off last month, Wonder Woman appeared to be speaking to the g-g-g-ghost! of Steve Trevor. This, along with the other spirits the League is speaking to, is revealed to be false. They’re “pretas,” which we would know about if we read the book Graves wrote about the League. Silly us for not picking that up! The League figures this out, defeats Graves, saves Trevor, and then deals with the fallout of their battle amongst themselves being broadcast world wide.

It is when the battle ends that my reader-rage began, as a number of things take place that are clearly only here to move things along, awkwardness be damned. Sometimes creators need to write for the future, especially at the end of an arc, but the last 10-12 pages of this issue were clearly thrown together to put the pieces in place for the next step of the book, even if each move is slightly more perplexing than the last.

First, we get Wonder Woman and Steve Trevor “breaking up” again. Wonder Woman’s motivations are pretty clear to anyone who has ever read a comic: when you are a public hero, the people near you get hurt. But Trevor isn’t Lois Lane or Gwen Stacy; he is a covert government agent and, therefore, his life is constantly being threatened. Actually, Steve Trevor has been one of the few pieces of this book that makes sense. For the League to operate as they want, it would be helpful to have someone run interference with the government. And to ask for a new liaison seems like a way to just invite more trouble to your already troubled team.

Up next comes the blame game. Graves blames the League for his family’s death – and in case you forget why, here it is: because they were in the area that Darkseid’s forces attacked, and they survived. In the process, they breathed in Apokolyptian ash, developed a terminal illness and died. First of all, this is a preposterous proposition; would Graves rather have the JL let his family die in that attack? Or should they have sacrificed defeating Darkseid to evacuate his family?

But more ridiculous than the accusation is the reaction from the League: THEY AGREE WITH HIM. They somehow feel like they should be able to cure disease (?) or predict what burned materials are carcinogens (??), and feel that they must answer to the world for their mistake. If I didn’t know any better, this would seem to suggest that the NYFD should have to apologize to all the people of New York who got ill post-9/11. Neither group caused the destruction, nor did either’s actions cause the illness. This is, frankly, insane.

And then, as if that wasn’t enough, Green Lantern resigns. Not because he is too busy being a space cop, not because he doesn’t agree with their mission, but because the League needs a scapegoat for the battle that was broadcast. And since he “started it,” he’s gone.

Now, not only does this rip off The Dark Knight in a particularly literal way, but it is also a pretty Poochie move. Because Hal is not in the main “Green Lantern” book for the next few months, they needed a way to get him off the Justice League. This entire idea is predicated on the idea that the League is the day job for these heroes, which it really isn’t. Batman is in a thousand other books, and it would be totally logical for him to disappear for an arc in “Justice League” because Gotham is on fire or something. Couldn’t Hal just get an urgent message on his ring and say “I don’t know when I’ll be back.” Done.

Instead, we get the comics equivalent of:

Then comes “the kiss” – the huge media event that DC has been pushing for the past two weeks that “redefines the status quo,” or some other hyperbolic buzz term. To be fair, this makes a little bit of sense: after realizing that anyone close to her has the chance of being hurt, Diana would be relieved that, most likely, Clark would be the exception to that rule. Clark must see the same in Diana, and so, why not?

Of course, the answer most people will give is that Superman and Lois Lane are one of the greatest couples in comics – she brings out his humanity, he brings out her bravery – and that Wonder Woman and Steve Trevor would make for a more interesting couple. I agree with both points, but I don’t think this is the worst idea in comics, let alone in this comic.

And then, because enough dumb shit didn’t already happen, Amanda Waller wants Graves to write a book about how to bring down the Justice League. Because, you all recall after the first Gulf War, when the US asked Saddam Hussein to write that best-seller How to Defeat the United States. This makes absolutely no sense, and is just an excuse for Jim Lee to draw skinny Waller.

Speaking of Lee, there really isn’t too much to say about his artwork. If you like Lee, you must be liking his work on this book, as it is pretty much exactly what you would expect. His style fits big battles and brooding heroes well. It was a bit jarring to see his variant “Before Watchmen” covers, because it revealed how non-pliable his work is – for those, his work looked silly and dated. Here, while it isn’t exactly cutting edge, his work fits and he is still the best at Jim Leeing in the business.

The book ends with two teases towards the future. The first, titled “Coming in the Second Year,” is drawn by Ivan Reis (perhaps a clue as to where he is going post-“Aquaman?”) and shows Shazam as part of the team, teases Cheetah as a villain, Atlantis turning on the world, and a traitor being a part of the team. None of this looks particularly exciting, but I do like the idea that Johns has a strong idea of where he wants to take the book. To be fair, the last time he did this, he teased “Flashpoint” at the end of “The Flash” #1, and then “Flashpoint” looked entirely different than what was hinted at, so these stories may or may not come out looking like this.

The second teaser, titled “Coming in 2013,” is leading towards the new “Justice League of America” book by Johns and David Finch. The text reads: “The Justice League can’t be trusted…so a new league must rise to stop the greatest war of our era. And it will take more than the world’s greatest super heroes to save us! It will take the world’s most dangerous!” Along the text, we see images of Pandora, Superman and Batman fighting, and the new league.

This book still has potential – it has some of the best comic characters ever on a team together, with a competent writer and a series of talented artists. There is no reason that this book can’t be what DC wants it to be: the destination where new readers can go for exciting stories featuring iconic characters. But so far, this has to be among the most disappointing books of the New 52.