‘Throne of Atlantis,’ a 5-part (with an epilogue) “Justice League”/”Aquaman” crossover, starts this week with opening salvos from both titles, and marking the debut issues of new artists to each book. 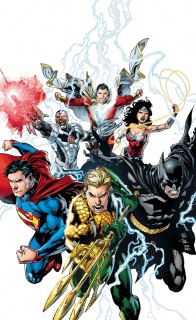 – Part 1 of “THRONE OF ATLANTIS,” crossing over with AQUAMAN!
– Don’t miss the debut of IVAN REIS and JOE PRADO (AQUAMAN) as the new JUSTICE LEAGUE art team!
– Can the Justice League band together to battle the forces of Atlantis?
– And in the backup feature, Shazam comes face to face with Black Adam, and Billy makes a decision that will shock his friends!

In its first chapter, ‘Throne of Atlantis’ finds itself feeling very much like an issue of “Aquaman,” despite it appearing in “Justice League.” This is partially due to the former “Aquaman” artistic team of Ivan Reis and Joe Prado now working on “Justice League.” ‘Throne of Atlantis’ is certainly an Aquaman-centric story, and after a few Wonder Woman-led issues, it looks as if Johns is trying to flesh out the non-Superman/Batman members of the book, while using his big guns as their foils. Superman is romantically linked with Wonder Woman, and here Batman is Arthur’s confidant and challenger for leadership of the League.

The book is also laid out quite a bit like “Aquaman” was in its first year – multiple pages with no dialogue, a few full-page panels, a large-scale splash page, and the feel that this isn’t quite a full issue’s worth of story. While the art is unquestionably nice – Reis and Prado have a distinct style that fits with the aquatic nature of this story – the plotting feels decompressed to an almost Bendis-like pace. “Aquaman” is the New 52 book where the least action occurs, with by far the most brooding.

And Johns, despite having written characters with problems before, has really caught the moping around bug in the New 52, and the lack of Hal Jordan (and the minor role the Flash has played thus far) in this book really makes it a mope-fest. There is a scene with Clark and Diana having dinner in their human personae, and while it is a scene that’s been done better elsewhere, it may be the first time that these characters have felt even the slightest bit three dimensional within these pages. Cyborg is still painfully underdeveloped, the Flash doesn’t appear to be a member of the team anymore, and Batman appears to be the caricature he usually is in a Justice League book (the shadowy, distrusting jerk).

And then there’s Arthur, the emo-est character in the DCnU. While it appears that most comic readers wanted an edgier take on Aquaman, there is a vocal minority (including at least a few Multiversity staffers) that misses the fun. Because this is an Aquaman-centric story, this book is stuffy and humorless to the extreme. The Superman/Wonder Woman scene feels completely out of place within this joyless comic. Not that “Justice League” needs to be the comic equivalent of the Batman: The Brave and the Bold cartoon series, but there just isn’t anything even remotely light in this issue. We see three examples of people with romantic feelings for each other appearing to be totally indifferent to one another, we see friends distrusting friends, and the world on the brink of disaster.

The disaster in question is an attack on humans by Atlanteans, after a nuke was accidentally fired at Atlantis. While “accidental” is an important detail, I could see why Atlantis would be on the defensive. Orm, Arthur’s brother, is King of Atlantis, and is attempting to declare war on the surface world. Arthur’s loyalties are questioned, Batman doesn’t totally trust him, and Superman and Wonder Woman’s date gets wrecked by a tidal wave. Hundreds of people are killed in this issue, because the Justice League couldn’t do enough to save them.

Classic Justice League stories could get dark, but there was always the implication that they would end up saving the day. Outside of the initial Darkseid-centric arc, it seems like each adventure is one that doesn’t necessitate 5 or more heroes to solve it, but yet there is no confidence in their own abilities to stop thees things. When reading the last arc, where Cheetah was the villain, it seemed totally plausible that she could take down the Justice League. While there needs to be some doubt for the reader, c’mon. “Justice League” should be the optimistic team book. Sure, bad shit, terrible shit, is going down – but the big guns got this.

Instead, Johns and Reis deliver a dark, stormy story about heroes struggling to deal with each other, with major threats, and with sustaining an enjoyable comic. While there is a place for a story like this, “Justice League” doesn’t feel like that place. 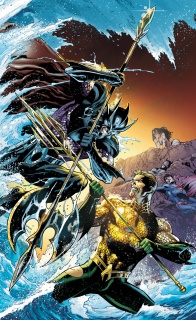 Over in “Aquaman,” the underrated Paul Pelletier debuts as the new series penciller, and acclimates himself nicely. His style is less dramatic and more fluid than what Reis was doing on the book, and in one issue Pelletier puts across a much warmer tone than Reis ever did. While dark stuff is still happening, the illustrations give a hint of hope and humanity to the proceedings, from the fear on the face of the sailors Orm attacks, to the warm look Vulko gives Arthur at their reunion. His Wonder Woman is particularly Megan Fox-ish, but that is hardly a punishable offense. Overall, his work is a pleasant addition to this title.

Unfortunately, although the artist may have changed, the book is more of the same. The New 52 has attempted to make Aquaman important, but in the process has only made him insufferable. Why would the League want this guy? He is publicly a joke, despite being quite powerful, not a real great team player, and appears to lie about a lot of stuff. Just because someone doesn’t smile all the time, it doesn’t mean that they are important. While his profile may be raised, his character has never been lower, creatively, than he is right now. And that comes through in this book quite clearly.

Vulko, an Atlantean ally of Arthur’s, pops up and attempts to warn both Arthur and the surface world of the looming threats coming their way. It is nice to see Arthur have a pleasant relationship with someone, and it is nice to see that there are dudes going bald who think growing it out in the back is the answer in Atlantis too. The obvious thought, however, was “why isn’t this the place to re-introduce Aqualad?” A brand new Aqualad was introduced in “Brightest Day (by, you guessed it, Geoff Johns)” back in 2010, and he has a major role on the very popular Young Justice, so why not have Aquaman’s Atlantean ally be a character that might have a role in the DCnU after this issue? The answer to that isn’t clear.

To keep things in the animated realm, the Batman/Aquaman pairing almost appears to be a reverse call back to their relationship on the aforementioned Batman: The Brave and the Bold. “Since that pairing was so successful, let’s take the opposite approach!” Aquaman, the guy who loves being both a hero and a husband, is nowhere to be found here, and his relationship with Batman is, basically, a Mexican standoff extended over a lifetime. Neither one trusts the other, and each subsequent maneuver is one that gives them a new way to one-up their foe.

The issue ends with even more tension between Batman and Aquaman, and the “team” is still not functioning in any reasonable way. The Justice League is appearing more and more to be acting like the Avengers, and I don’t mean that in a good way. The Justice League, while not exactly golfing buddies, always seemed to truly care for each other, and you got the impression that team allegiance was secondary to friendship; Superman was going to help Batman because Clark considered Bruce a friend. The Avengers, on the other hand, always felt more like an obligation. Sure, they were Avengers, but it didn’t mean that they had to actually like each other. And yet, in December, we see Tony Stark and Steve Rogers with their arms around each other, friends and colleagues, and we see Aquaman with his hand around Batman’s throat. To call his run flawed is an understatement, but the scene I kept flashing back to was the presentation of the Red Arrow costume to Roy Harper in Brad Meltzer’s “Justice League of America” run. Here was Harper, surrounded by former mentors turned friends, being accepted into their gang with open arms. To me, that is what the Justice League has always been.

Instead, we get ‘Throne of Atlantis’ – instead of the League siding behind their member Aquaman, they spy on him, castrate his power, and distrust each other all along the way. O, Justice League, where art thou?