One of the reasons that Geoff Johns was such a vital member of the DC creative team pre-New 52 was that he has a deep love of continuity, and a discerning enough taste to know when something worked or didn’t work. It was this sort of eye for minutia that led to some of the high points of “52” and, especially, made his “Green Lantern” run the definitive run of the last thirty years. That is also why his work in the New 52 has been such a mixed bag; when the guy’s strength is plucking through the past for worthwhile ideas and making them into something new, and you gut the past, what does he have to stand on?

Now that there is a year plus of “history” to the New 52, Johns has begun to settle in a little on his non-“Green Lantern” work, and begin to make something that more resembles his pre-“Flashpoint” work. However, in doing so, Johns has slipped into the area that the New 52 was distinctly designed to avoid: re-telling old stories. 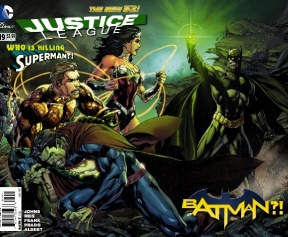 • Who is the one person dangerous enough to use Kryptonite against Superman?

One aspect of the Johns-era “Justice League” has been really setting them apart from the world at large. Over and over, the reader is reminded that, even though these are the good guys, they are not trusted or accepted in any way. People are leery of them, and they do very little to change that perception. This is a new way to position the Justice League, but it is one that doesn’t really work with the team as currently assembled. Batman operates in the shadows, and that is fine, but to see Superman donning a disguise to help refugees in Kahndaq seems both silly and unnecessary. The New 52 Superman is not the shining beacon of hope that he was a few years ago, but even from a purely strategic point of view, this makes no sense: if you’re eventually going to reveal yourself, just do it from the beginning. YOU ARE SUPERMAN. YOU CAN OUTRUN, OUTHIT AND OUTTHINK ANY OF THESE FOOLS.

Johns has been attempting to make the Justice League the X-Men, a team that divides public opinion and scares the government. That isn’t the worst approach in the world, though certainly not the most original either, but it doesn’t work because of what the characters on the team are supposed to be. The two new members of the team highlighted here really show why this is such a flawed plan. Firestorm, for the first time in the New 52, is presented as having fun which, if you know the character, is sort of what his character is all about. Similarly, the new Atom is an amalgam of the Atoms that have served in the Justice League before – she is a young scientist from Ivy Town, with just a dash of the “Sword of the Atom”-era warrior thrown in for good measure. There is a fun sequence where it appears that Rhonda, the new Atom, is fighting orcs and monsters, only to reveal that she shrunk herself down and entered into a video game. Admittedly, this is sort of dumb, but it is the sort of dumb that comics fans have come to love and expect from Justice League comics.

And that is exactly why this series is still stumbling along. For every bit of fun that sparks up, there is a gallon of sorrow and dourness to put it out lickity split. Firestorm and the Atom are supposed to be young, new heroes – why the hell would they want to be a part of this Justice League? Do they not get glared at enough? Aquaman is a humorless mess, the Flash hasn’t been around regularly, Cyborg is losing his humanity, Batman is mourning the death of his son, and the brooding lovers in the corner can’t be good company.

No one is calling for this book to become “Batman: The Brave and the Bold,” but of the three Justice League books, this is supposed to be the one that is the most hopeful. “Justice League of America” is set up to destroy this League, and “Justice League Dark” has its mood right in its title. And so, instead of being the book where the best heroes fight the biggest threats, this turns instead into a group therapy session. Significant time is spent dealing with both the death of Damian Wayne, and Superman and Wonder Woman dealing with the repercussions of their relationship. While these are fertile wells to be tapped into, this shouldn’t be the book that deals with them.

What makes all of this somewhat palpable is the art of Ivan Reis. Reis is a great fit for this book because of his versatility, especially with drawing the various characters and not having any one look out of place. His Aquaman is just as at home in these pages as his Cyborg, and that is exactly what a team book needs. However, Reis may also be part of the problem, as his world seems to always be darker and more brooding than just about any other in all of DC. Even the Atom/Firestorm scenes, which are supposed to be light and carefree, have an ominous tone to them that suggests something isn’t quite right. It doesn’t matter that something isn’t quite right, nor that this is always the case for superheroes – sometimes these books need moments of levity, and Reis isn’t bringing that right now.

And neither is Johns – the vein that Johns is mining this issue is two-fold. The first is the classic Justice League villain Despero, who hasn’t been seen in the New 52 yet. Despero was always a threat that seemed credible to the League, and so is a far more interesting foe than, say, Cheetah. The use of the shape-shifting Despero also lets Johns tap into another well-worn Justice League trope, which is Batman versus the rest of the League. Despero sneaks into the Batcave and steals Kryptonite, which Bruce keeps on hand in case Superman ever gets out of control. There is no doubt that the extent to which Batman has researched and protected himself against his teammates makes for interesting reading, but this something that has been played out time and time again. If the New 52 is meant to tell new stories, and not get bogged down by continuity, this issue fails on both fronts. To introduce Despero is to elicit a response from the readership – if this is a new villain, the reaction means far less. Plus, by telling an old story without the old continuity, this isn’t a “Bruce is getting out of control again” story, it is a “Wait, is Bruce out of control?” one, which, again, is only interesting to new readers.

I do have to applaud Johns for connecting this book to the Bat-books, even just slightly, and his attempt to not have this book be an island unto itself, though he still has work to do on that front. Case in point: this issue has Wonder Woman and Superman talking seriously about their relationship, but over in “Wonder Woman,” she is [spoiler alert] grabbing Orion’s balls. The wide net of DC titles will never interact with each other logically, but having the book at least acknowledge Batman’s life outside the league is a good start.

In the backup, the origin story of Shazam, nee Captain Marvel, is winding down. These snippets don’t always work in single issues, as to move a story forward you can’t always have ten amazing pages in a row. However, Billy is starting to become a more well-rounded character, and Gary Frank impresses each month with his work on the backup. Frank’s art manages to call back, visually, to the type of look you’d expect and hope for in a Shazam story, but isn’t a strict classicist either, and manages to add some nice touches and makes the book look modern. Jerry Ordway was always on of the best to do the Big Red Cheese, but his stories always felt out of modern time; Frank has no such problem. As Johns brings this story to its conclusion, I hope that the work put in building up the supporting cast of foster kids doesn’t go to waste. Can a “Shazam” book be far away? And what will replace it as the “Justice League” backup, post-Trinity War/Villains month in October? (My bet is either The Atom or Element Woman)

Overall, this issue is a reminder that the New 52 is a bizarre hodgepodge of old ideas, new ideas, decisions made to appeal to new readers, diversity attempts, good work and bad work. For every slow moving “Shazam” piece, there is a sloppy bit of storytelling wedged next to a necklace from a 20-year old comic on a female version of a traditionally male character and a classic villain being reintroduced. “Justice League” is supposed to be the flagship book of DC’s line, and with its inconsistency, it certainly earns the title. Here’s to hoping Trinity War can set the book straight.