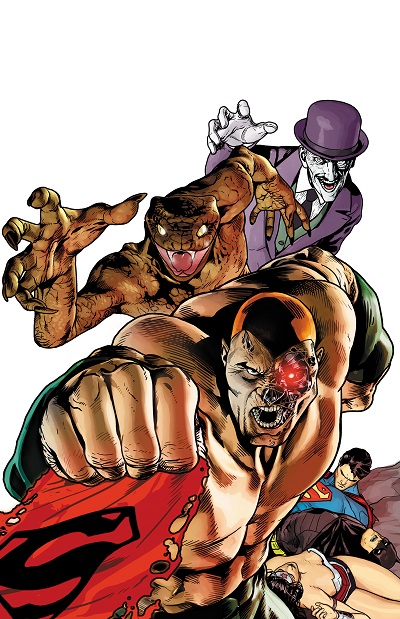 The Crime Syndicate has left a path of destruction on their way to the main DC Universe, and “Secret Society” fills out more of their history in an interesting, and poorly named, issue. 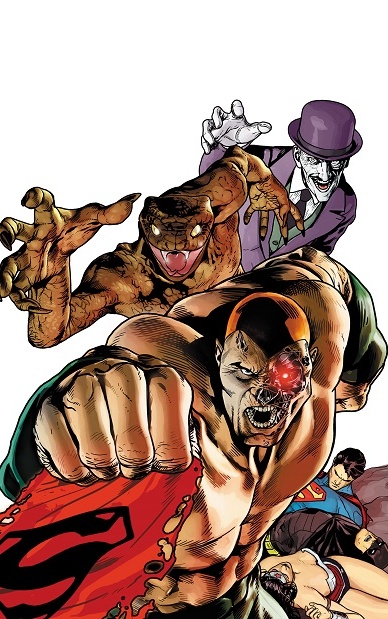 An army of super villains has been built throughout The New 52 during 2013—but for what purpose? Learn about the villains that have paved the way for the world of FOREVER EVIL.

Over the four weeks of Villains Month, DC has been careful to include a few books every week that actually deal with the ramifications of the Crime Syndicate’s invasion as seen in “Forever Evil”. These issues are a nice break from all origin stories and character re-introductions, and add to the idea that this really is an event that affects the whole universe. “Secret Society” purports to be about how this new group of super villains were brought together in advance of the Crime Syndicate’s arrival.

The Secret Society of Super Villains has existed in various incarnations throughout DC history. The rough outline is always the same: a bunch of everyone’s favourite bad guys are brought together by one central figure, sometimes Darkseid, sometimes Lex Luthor, and decide to pool their resources and take down the Justice League once and for all. The New 52 version of the Secret Society has been the subject of a slow build, spread out across multiple books and stories. With the initial gathering of the group already explained, “Secret Society” chooses to focus on the history of their recruiter, the mysterious Outsider.

The pages of ‘Trinity War’ and “Forever Evil” have already revealed the Outsider to be a version of Alfred Pennyworth, Bruce Wayne’s trusted butler, from the alternate universe Earth 3. On this world, there are no super-heroes, only villains seeking to dominate and enslave all they see. This Alfred comes from a Gotham that is far worse than the one readers are familiar with, which seems hard to believe. The city is a dark and violent hell hole, run by the tyrannical Owlman. Evil Alfred explains some of the twisted events on Earth 3, including his own dark role in Owlman’s origin, and the recent demise of the Dick Grayson of that world. Soon after, a portal to the main DCU is discovered, through which Evil Alfred travels and begins to prepare for the Crime Syndicates arrival.

“Secret Society” features DC architect and CCO Geoff Johns on plot, with Sterling Gates handling full writing duties. Johns is the mastermind behind the ‘Trinity War’/ “Forever Evil” event, and has a proven history with writing villains. With Johns on board, “Secret Society” feels like a perfect natural extension of the “Forever Evil” storyline. There are none of those inconsistencies that can occur when many writers are tacking the same event, and instead matches the tone and style of the main series. Johns obviously has a clear vision for the Crime Syndicate, and uses his vast knowledge of DC history to include a few interesting twists on familiar stories.

Sterling Gates, known for his diverse range of work stretching from “Supergirl” and to New 52 relaunches of “Hawk and Dove” and “Vibe”, does a good job filling out the full story. Considering the fact that he has a couple dozen pages to explore an entirely new world, there was a good chance that “Secret Society” could have turned into a huge mess of exposition. While there is a fair amount of backstory and narration from Evil Alfred, Gates wisely intercuts it with several action scenes that unfold across Earth 3 Gotham. The energetic pace is established early on and is actually sustained throughout the issue, making the exposition much more bearable. In another smart move, some of the backstory is only hinted at, which gives more credence to the idea that this is an entire world with a vast history.

Art duties on “Secret Society” are handled by Szymon Kudranski, who recently worked with Johns on his final “Green Lantern” issues. Earth 3 is supposed to be a decrepit and terrifying world, the birthplace of evil. As Kudranski’s work on “Detective Comics” and “Batman: The Dark Knight” have proven, he can do grim and gritty with the best of them. Kudranski’s art creates a foreboding and ominous atmosphere from the first page and the muted tones make the issues violent explosions seem even more impactful. His use of rain soaked silhouettes, while perhaps featured one too many times, are very evocative.

If there’s one downside of the art in “Secret Society”, it’s that Kudranski went a little overboard with the grim and bleakness. Yes, Earth 3 is dark and miserable, but the reader also needs to be able to see what’s going. The issue’s climactic scene features Owlman, Alfred, and their version of the Joker in a messy three way confrontation. Owlman is only distinguishable from his glowing eyes, and at times it is very difficult to tell if Alfred or the Joker is featured in the panel. To be fair, this is also to do with the way the scene was colored, which Kudranski has no control over, but it would have been nice if he had found a way to make the characters slightly more distinct from one other.

Perhaps the biggest gripe some will have with the “Secret Society” issue is that it features very little of the Secret Society of Super Villains itself. Their origin was already detailed in various books leading to ‘Trinity War’, so it’s actually a positive thing that they chose to avoid chasing that story. The title is still misleading, however, as the book is essentially an Alfred/Owlman adventure occurring right before the Crime Syndicate’s take over. A better title would have been simply “Earth 3”, marketing potential notwithstanding of course.

Final Verdict: 7.0 –A soft buy for a “Forever Evil” completionist. If you can make it through a couple pages of murky art, “Secret Society” is actually a well-constructed book with the minimal amount of exposition needed to explore another side of the current DCU event, but not necessary for the whole.