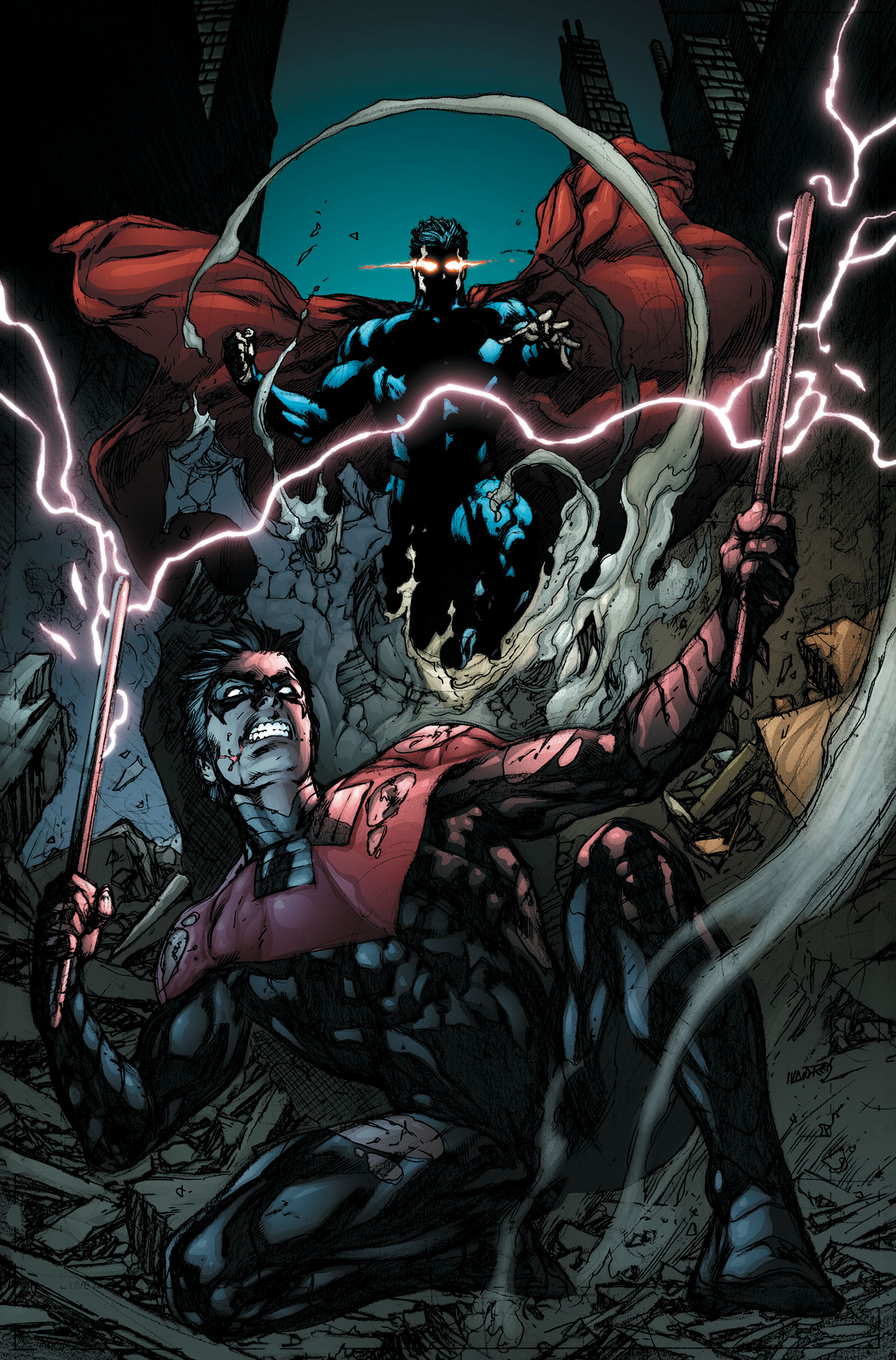 The full and bloody history of Owlman is revealed in an entertaining, but not unpredictable, issue of “Justice League” from Geoff Johns and Doug Mahnke. 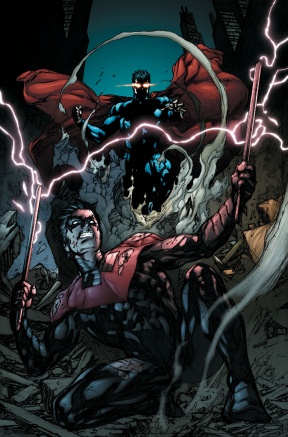 FOREVER EVIL continues as the Crime Syndicate hunts down the few heroes left foolish enough to challenge them—including Batman’s protege, Dick Grayson. But Owlman has other plans for Nightwing…and Owlman’s teammate: the most deadly being on the planet: Ultraman!

As DC’s “Forever Evil” event nears its halfway point, the Crime Syndicate’s hold on Earth Prime seems to be growing only tighter, while its members are already trying to stab each other in the back. Owlman and Ultraman have taken their latent animosity between their Earth Prime counterparts to psychotic levels. The previous issue of “Justice League” took a look at Ultraman’s dark journey from Evil Krypton to Earth 3, and positioned the deadly love (hate?) triangle between Owlman, Superwoman, and himself. We saw Ultraman’s journey from evil child to evil supervillain, and now the book flashes back to the Gotham of Earth 3, as Thomas Wayne Junior takes the same journey.

The issue begins with the most important moment in the history of Gotham City, on Earth Prime, 1, 2, or 3, as the Waynes leaves the movie theatre and take a walk down an alley. There Thomas Wayne, the incompetent doctor, Martha, the cruel wife, and Bruce, the bratty son. They are accosted by someone in the alley, not a mugger, but by Thomas Junior, the oldest Wayne son. Thomas reveals that he and Bruce have plotted to kill their parents, and assume control of the Wayne fortune and company. There’s only one problem, Bruce gets cold feet, but this is not enough to stop an unexpected attack from gunning the three down, with Bruce meeting a particularly brutal end, as Thomas assumes the role of Owlman. In the present, Owlman talks to the captured Nightwing, recently revealed to the public as Richard Grayson, and informs the young hero of the few options he has to help protect his Earth from the Crime Syndicate.

One of the benefits that “Justice League” has over other “Forever Evil” tie-ins is that the issue is written by regular JL scribe and event mastermind Geoff Johns. This means that he can work the issue into the overall story in a way that the other tie-ins can’t, and he doesn’t have to worry about stepping on his own toes. Perhaps the smartest move Johns has made is using “Justice League” to focus on individual members of the Crime Syndicate, as there is room here for more character development without the burden of telling a global sized event, as with the main series. This issue actually reveals more depth behind the Owlman/Ultraman feud than the typically brisk they-don’t-like-each-other banter found in “Forever Evil”.

The Earth 3 flashbacks, however, are a different sort of problem. It’s not that they’re poorly written or haphazardly executed, on the contrary they are very entertaining and reveal a great deal about the characters. The problem is that the fact the reader by now knows that Earth 3 is an inverse of everything familiar on Earth Prime, the flashbacks are somewhat predicable by their very nature. The reader knows the traditional dynamics and interactions in Batman’s tradition origin, so it’s not hard to imagine the mirror universe evil version. The result is still entertaining, and Johns is master of twists and villain motivation, it’s just not the most unexpected set of circumstances.

This issue sees Johns’ former “Green Lantern” collaborator Doug Mahnke the chance to play around in this dark version of the DCU. As with the destruction of Krypton in the previous issue, Mahnke now becomes the 731st artist to draw the death and Thomas and Martha Wayne. What makes this origin different, is that young Bruce dies as well, at the hands of his brother and the butler. The scene is visceral and bloody, but Mahnke just manages to keep it from being grotesque and exploitative.

Mahnke is playing on the same canvas as David Finch, artist on the titular “Forever Evil” and it’s hard not to notice the difference in their style. Both are realistic and aim for a natural look, but the main contrast is that Mahnke’ drawing is much lighter and brighter than Finch’s. Mahnke is still detailed and appropriately gritty, but without the omni-present shadows covering everything in the main series. It’s a testament to Mahnke’ talent that he still manages to convey the appropriate tone, and proves that lighter visuals certainly don’t mean a lighter story.

Much like “The Avengers” and “New Avengers” books during Marvel’s “Infinity” event, it feels like key moments of the “Forever Evil” story are playing out in “Justice League”. The more limited focus in this issue gives the characters much more room to breathe than in the main series, and features good development without the need to cram a multitude of global events into its pages. Johns and Mahnke are wisely using the JL title to further flesh out the world of “Forever Evil”, and it helps to make the whole event a much more interesting read.