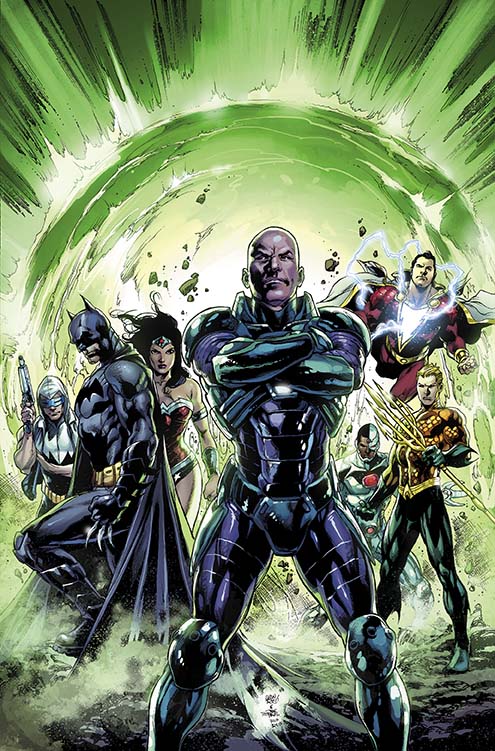 Now that “Forever Evil” has ended, the world and its heroes have to face the consequences, which include dealing with Lex Luthor: Savior of Earth in “Justice League” #30. 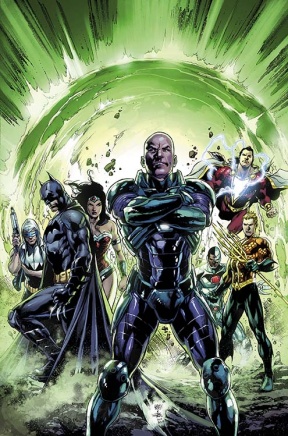 It all changes here with the first chapter of “INJUSTICE LEAGUE”! The next era of the Justice League begins as heroes quit, villains join and a Justice League roster you’ve never seen before emerges, led by the world’s greatest hero — LEX LUTHOR?! As the dust settles and the bodies are buried, the violent consequences of FOREVER EVIL must be dealt with — while a mysterious new force sets its target on the League. But is this force friend or enemy? And why does he want Luthor dead? (If you ask Batman, it’s a long list.)

After months (and months and months) of tie-ins and spin-offs and a delayed main book, the ‘Forever Evil’ story arc has reached its conclusion. The Crime Syndicate has been defeated, and the world is safe from everything except invulnerable rock aliens, angry gods, and psychopathic clowns. This does not mean that everything is right back to normal in the DCU; it’ll be months before the status quo swings back to normal. For the time being the Justice League is left to pick up the pieces, and deal with an angry public.

It’s splashed across every TV set, every newspaper, and every tumblr blog in gif form: Lex Luthor saved the world from the Crime Syndicate, and he even saved Superman in the process. Luthor now has all the praise he could dream of, and yet he’s suddenly disappeared. The Justice League has spent days tries to track him, when he suddenly invites them to new satellite orbiting the Earth, a replacement for the destroyed Watchtower. Luthor’s offer is simple: he wants in the League. He even submits to Wonder Woman’s lasso of truth to prove his intentions are noble not awful. The League doesn’t trust and Luthor leaves without a fight for the first time ever. Now the JL face their most deadly challenge yet: a popularity contest.

Geoff Johns loves villains so much, that he made one the biggest hero in the world. Lex Luthor, under Johns’ pen, is taking to the whole savior thing like a bald duck to water. He seems humble, sincere, downright nice when the cameras are rolling. It would almost seem believable if Luthor didn’t have a history of sociopathy stretching back through seven decades of comics. Johns writes the character to be as pragmatic as he is insane. Luthor decides what he wants, and then takes the quickest path to reach his goal. Luthor always wanted to save the world, and now he wants to do it again. The League saves the world on a fairly regular basis, and so joining the club would be Luthor’s best chance to tackle whatever 90’s villain will be revived next. Johns has managed to make Lex Luthor joining the Justice League seem like a logical and natural progression, a very impressive feat.

Johns does a very good job at summarizing the end of “Forever Evil” without pages of expositions and boring recaps. The issue really does feel more like the start of a new arc, instead of a protracted epilogue to “Evil”. If the tie-in status of “Justice League” and the adventures of Cyborg with the Metal Men weren’t enough to hold readers attention for the past several months, this issue is a great re-entry point to the series. Johns does have one surprise for the end of the issue, which would suggest that the biggest post-“Evil” status quo change might have less to do with the Crime Syndicate and more with Luthor’s self-proclaimed brilliance and powers of deduction.

The art for “Justice League” #30 is split between Ivan Reis and Doug Mahnke. While artist team-ups are frequently as result of rushed deadlines and filler art, Reis and Mahnke are such big and talented names that it takes away a lot of the stigma. The switch between Reis and Mahnke is noticeable, but both pencilers there is not the drop in quality often associated with artist pairings. While the change is apparent, both artists have a realistic and heavily lined style which mesh together quite well.

There is not much action featured in this issue, but the art still feels energetic and never boring. The pages are filled with entertaining character moments, like Jimmy Olson getting buried in newspapers and the Flash smirking when Bruce makes a bat-pun. When confronted by Luthor in the new Watchtower, the artists make the characters look concerned and sternly worried without falling into the trap of giving everyone constipated face. The art is detailed on every page, staying consistent as the locations change from offices, to satellites, to random apartments with super powered rings floating inside. Considering how often artists team-ups end in disaster, this issue stands as an example of how they can succeed.

“Justice League” #30 kicks off an exciting new chapter for the series. Geoff Johns makes the issue feel like a new start, not a re-tread of the end of “Forever Evil”, and makes up for a lack of action with character development and fun lighter moments. The art team of Ivan Reis and Doug Mahnke handle the transition between them quite will, and keep the book looking consistent and high quality.