From ridiculous concept to flawless execution, “Justice League Dark” has gone from a pass to the first thing I read from my pull. Issue #15 is a bridge issue, tying up loose ends from the first Jeff Lemire-penned arc, and setting the course for the next year or so of storylines, while wrapping that in a fun side adventure for three totally unconnected characters. 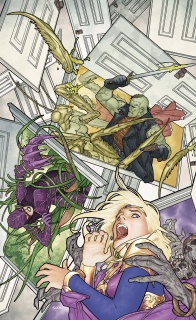 – A major new storyline starts here!
– In the aftermath of JUSTICE LEAGUE DARK ANNUAL #1, the team picks up the pieces from their devastating losses.
– Black Orchid, Frankenstein and Amethyst explore the macabre House of Mystery – and what they find positions John Constantine as the most dangerous man in the DC Universe!

The bulk of this story deals with a trio of characters Lemire brought to the book after taking the reigns from Peter Milligan: Frankenstein, Amythest, and Black Orchid. Two of the three make sense; Black Orchid has been a player in the “Animal Man” pages of’Rotworld,’ and Frank was written by Lemire for the first 9 issues of his (soon to be cancelled) solo series, but Amythest is an interesting choice to throw on the team at this point. First of all, she is newly reintroduced to the DCU, and already is popping up elsewhere. Her powers fit in with the team’s skill set, and by showing her being able to pop back to the “real” world, it shows potential for the character to not simply be relegated to her own book. Or, as I hypothesized last month, perhaps this is just a precautionary bet against the failing of her own series – if DC has real plans for the character in other media, at least she’ll have a home here.

Our three intrepid heroes go on a jaunt through the House of Mystery, and encounter a shifting, dangerous, unusual place that they were (mostly) unprepared for – Frank seemed to know it was bad news. The various settings the three heroes find themselves in all fit the vibe of the series under Lemire – they’re a little creepy, but have a humorous aspect to them as well. The danger is there, but it is secondary to the team assembled to fight it.

Because I handle the DC quadrant of the Soliciting Multiversity column, I am hyper aware of artistic changes and spots where the solicitations got it wrong, so it was surprising to me to not see Lee Garbett as the penciller here, as that was who was solicited (as well as who still appears on DC’s site). However, the team of Graham Nolan and Victor Drujiniu do a much better job evoking the feel of regular penciller Mikel Janin than Garbett did in the #0 issue. Consistency is so rare in monthly comics, that having fill ins that get the overall tone is a nice touch, especially mid-arc. Janin is one of the breakout stars of the New 52, so his work is missed, but Nolan/Drujiniu fill in nicely. Their Frankenstein is a little more in line with how he appears in his own book as well, as opposed to Janin’s almost cartoonish version.

Comic creators love blackboards/corkboards full of foreshadowing, and Lemire is no different. This issue shows that Constantine has been keeping tabs on some of the heroes of the DCU.

There isn’t all that much to digest here, outside a few jokes (“Aquaman – who cares?”) and a teases (“Who is organizing all the super villains? WHY???”). What is interesting is the grouping of people they are highlighting – along with the big guns, we see Booster Gold for the first time since “Justice League International” ended, we see some Stormwatch-ers, S.H.A.D.E. agents and even Black Adam. A few terms are tossed around that I’m sure will gain significance in the next year or so: “Big M,” “Project Ascension,” “Cold Dog Apache Reservation,” etc. More than anything, this board shows how highly DC thinks of Lemire, in terms of putting him at the center of some of their bigger plans for 2013.

The issue also has a visit from the Phantom Stranger, who basically asks Constantine to pick a side in the upcoming Trinity War. The Stranger seems to be lobbying for Constantine and gang to side with him, leaving the Question and Pandora as the free agents. It would seem like Pandora, since she has been featured in the pages of “Justice League” and has some history with the Flash, will court the Justice League. Since Vibe, Green Arrow and more have been shown as part of this battle, perhaps the newly formed Justice League of America stands with the Question. Whatever Trinity War winds up being, I hope it is a less jumbled mess than the House of Ideas’ version of super teams battling each other, ‘AvX.’

This is a bit of an unusual issue, since it falls between arcs, and because so many dangling threads are still dangling. Some interesting choices are made, such as giving the team their own government stooge to hang around for awhile (Peril), bringing back a traitor (Dr. Mist), and putting the book at the forefront of the Trinity War. Above all, despite its less than essential status, this issue is simply fun. Lemire and co get it – not every issue needs to be earth shaking, but each issue does need to have a reason to come back next month without feeling cheated. And with this interesting amalgam of characters, under a gifted writer’s pen with quality artwork, this book delivers on all criteria.

If only the name of the book wasn’t so dumb.