You have to hand it to “Justice League Dark” co-writers Jeff Lemire and Ray Fawkes – they are certainly blazing a trail in comics that most of their fans would never have seen coming. Both men got his their with personal graphic novels before moving over to DC to, primarily, write superhero stories. I doubt many of the fans of “Essex County” or “Possessions” ever expected to read a comic where Black Orchid became a ragemonster. But that is what makes this pair so intriguing and fun. 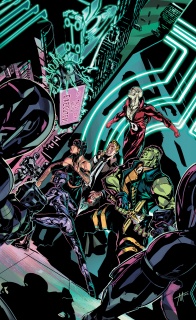 Written by Jeff Lemire and Ray Fakes
Illustrated by Mikel Janin
– A new story arc starts here!
– Trapped in a technologically advanced dimension where magic is outlawed and magic users are hunted and executed, the team must find Zatanna and Tim Hunter within 48 hours or be trapped there forever!
– Rules have never stopped this team before, but their attempts to use magic in this issue are met with terrifying results.

Fawkes joins the book this month, and while it is hard to identify exactly what each co-writer is doing, this issue’s story that breaks from the action in Nanda Parbat has an edge and an urgency to it that isn’t typical for Lemire. Lemire’s books tend to simmer; this is boiling over. In terms of the future of the book, I think this is a great development. The first full arc Lemire did was supremely entertaining, but with the book promising to dovetail with “Justice League of America” and “Justice League” later this year, the book needed to have a little more big action feel to fit in.

The main thrust of the story deals with Zatanna and Tim Hunter being sucked into a world, possibly called Epoch, and doing battle with an officer named Vikar (it isn’t made clear if that is the name of the region or the organization that Vikar is working for) who is regulating his land’s laws against magic. The land doesn’t appear to just outlaw magic, but also corrupt those who use it, some to the point of unrecognizability: Zatanna becomes hyper-violent, Constantine can’t help but tell the truth, Deadman appears to be alive, Madame Xanadu, an immortal, ages before their eyes, Black Orchid turns into a gigantic beast.

One of the fun things about this book is how the characters act exactly how you expect them to, yet don’t fall into the usual traps associate with them. Having Constantine and co. keep Dr. Mist around so that Deadman can manipulate him is something borderline evil (and perhaps a statement on the US’s torture techniques from two Canucks), but is perfectly in line with the type of “hero” that most of these folks are. They are all about results, process be damned. These are not the same heroes who would quibble with Wonder Woman over breaking Maxwell Lord’s neck – they’d have beat her to it.

And so, seeing them paying for using their magic doesn’t feel like seeing Superman get blasted with a Kryptonite ray. Even though they may not have done anything wrong today, these aren’t scouts. And because of that, the stakes feel more real, and the danger more apparent. There is also quite a nice bit of humor thrown in, particularly from Constantine having to tell the truth suddenly. The government stooge assigned to the JLD, Dr. Peril, manages to provide some thematic link to the other “Justice League” books, and is the science mind missing among all the magicians. While the name “Dr. Peril” is silly to the max, it sort of fits this book – I mean, is that any sillier than Deadman or Dr. Mist?

One of the real superstars of the New 52 has been Mikel Janin – his work on this book has been nothing short of revelatory. He is also clearly getting better as he goes on; when Frankenstein joined the cast, initially he looked clunky and cartoonish, but he has really figured out how to draw Francis (as Constantine calls him) over the past few issues. His work splits the difference between photorealism and stylized splashiness, giving the pages a smooth, well defined look that is unique to him alone. In particular, his Zatanna is hyper-expressive, and subtle shifts in her facial features here really drive home her changing attitude while using her magic. Janin excels in the large and small here, and continues to do right by this book.

The fact that this book has transformed from “worst named book of the New 52” to the most enjoyable team book, by a long shot, that they are putting out says a lot about how Janin and Lemire have taken the book from the, surprisingly unsuited, hands of Peter Milligan, and turned it into something special. Fawkes seems like an addition that will pay dividends in the future, and with the cast having various loose allies in other books, the possibilities seem like they will keep coming and impressing as the months go on.