Suddenly Jeff Lemire is one of the busiest guys in all of comics. Now scribing a fourth book, “Justice League Dark,” we get to see his take on the supernatural side of the DCnU. At least, the non-Animal Man and Frankenstein supernatural DCnU. 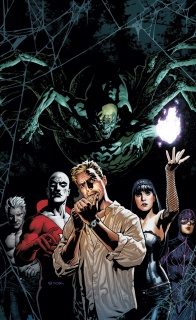 I tried to read Justice League Dark when it first started, but found it to be somewhat dull. It didn’t feel like it was going anywhere, and the dialogue didn’t do much to endear me to the characters inside. I dropped it about 4 issues in, but decided to check it out when the new writer, whom I had been enjoying immensely on “Animal Man,” took over.

Now, what I’ve read of Lemire’s, I’ve liked. He has a talent for tackling the weird and ridiculous in a way that makes it not only believable, but fun. His grasp of character has always been top-notch, from “Animal Man” to “Superboy,” and “Justice League Dark” is no exception.  Every character has their own unique voice, from Constantine’s smug arrogance to Deadman’s enthusiasm for super-heroics. If there were a weakness in the book, it’s that Jeff does’t quite reach the balance one might expect from a team book, like “The Avengers” or sister book “Justice League.” It features Constantine and even Zatanna rather heavily, but characters like Vampire or Black Orchid are barely used. One hopes they’ll show up more frequently in the next issue, as they’re somewhat more interesting than the two previously mentioned leads.

One of the strengths of this issue comes from how easy it is to pick up. While this issue has a “#9” on the cover, it is very much a first issue of sorts. The events from the previous eight issues are touched upon, but never more than in passing. In fact, the issue is mostly standalone and works much like one of Marvel’s “Point Ones,” which serves as the perfect entry point to the series and teases the future of Lemire’s run. If there was something that the first arc was missing, it was a direction other than “hey look, here are some magical people on a team!” Everyone on the team has something to gain by being on the team now, which was hinted at early in the issue when John had trouble recruiting for the mission assigned to him by “Justice League” liaison and former Wonder Woman arm candy Steve Trevor (probably in an attempt to link the books more directly). No one wants to be there, but now that there’s a hook, they’re definitely in it for the long haul. Furthermore, the fact they all want something out of the deal aside from JUSTICE with the possible exception of Deadman means there will be tons of friction in the issues ahead.

If there was one thing that needed to be kept from the previous issues of “JLD,” it was the artist, Mikel Janin. The Spanish artist has some of the most gorgeous art in the New 52 and is easily my favorite artist currently working with Lemire on his various superhero titles around the nU. His dynamic layouts and action-laden pages are never stiff or boring, and even in panel, he knows how to make things look more interesting that simply in the most obvious way. An example would be with Black Orchid. Her shapeshifting powers are not an uncommon one in the realm of comics of even sci-fi/fantasy as a whole, but the use of her powers is presented in a way that, as far as I have seen has never been seen before. The attention to detail and the desire to not phone it in makes Janin one of my new favorites.

If you were looking for a different sort of super-hero title from DC, this is certainly one of the stronger titles that features lesser known heroes and one of the more promising plots out there. Check it out.