“Justice League Dark” ends its second arc, and first by writer Jeff Lemire, with an oversized annual. The extra size is used not only to finish this story, but to cover the expanded lineup of the team, which grows by three new members (all of whom carry their own titles). But more importantly, the tone set by this annual places the book in unique company, and allows it to become exactly what its title suggests: a magical version of the Justice League. 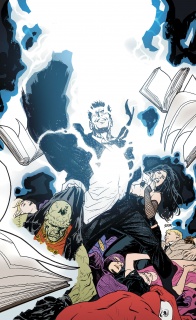 To fight the combined forces of Felix Faust, Doctor Mist, Nick Necro and a few minions, the JL Dark expands its ranks by calling in some reinforcements: past ally Andrew Bennett (of “I, Vampire” fame), the formerly Lemire-penned Frankenstein, Agent of S.H.A.D.E., and Amethyst, Princess of the Gem World of the newly released “Sword of Sorcery,” not to mention Tim Hunter and N’aall, the House of Mystery’s butler. A cynic might suggest that this is laying the groundwork for these characters to find a home in this book after theirs get cancelled; and, for Frank, that may be the case. However, all these characters have a somewhat shared power source in magic or some sort of supernatural skill, and so their inclusion here makes sense.

All three also give the team some people who can actually, you know, fight. Zatanna’s backwards spells, Constantine’s scheming and Deadman’s possessions not withstanding, it is nice to have some folks who can wield a sword or tear your arms off. Granted, the assemblage of the extra help isn’t exactly handled in the most careful way, as people are yanked from their homes/dimensions or just sort of show up in their flying vehicle, but spending too much time on calling on the reserves would make for a dull comic.

And this comic certainly doesn’t get dull, despite the real action not kicking in until the end. Lemire does a masterful job of using exposition to fill in the backstory without making it seem like he’s just dropping a ton of knowledge on the reader in lieu of action. The Books of Magic, though a concept that is somewhat self-defined, is fleshed out through Nick Necro’s conversation with Zatanna. Lemire also uses this conversation to tie the book into “Demon Knights,” by placing Mordru and Merlin at the center of the Books of Magic’s history.

Mikel Janin deserves heaps of praise for his flat out gorgeous work in this issue, and across the title as a whole. His style is distinctive, yet not limiting. When he draws Frankenstein, for instance, he isn’t aping Alberto Ponticelli’s work, but rather bringing his approach to the framework that Frank has occupied in the New 52.

He doesn’t quite nail everyone, but a large part of that might be because of the inimitable style of the artists who usually drawn them (like Andrea Sorrentino on Andrew Bennett), rather than a lack of finesse on Janin’s part. His flexibility as an artist is needed for such a diverse team, and his work has never looked better than in this annual. He will be missed on his month off in November (where the Zero issue’s Lee Garbett is back). Another quick artistic tip of the hat to cover artist Ryan Sook, who does a masterful job each month making this one of the most visually stunning books on the shelf. The covers are engaging, mysterious, and beautiful;

Necro, a character introduced in “Justice League Dark” #0, is the big bad here, and Lemire carefully used the Zero issue to both explore the past of the characters as well as push the story forward. Necro is revealed to be not only the villain of this arc, but also the progenitor of the team as a whole, playing a long con on Constantine and Zatanna via Steve Trevor and Black Orchid.

This plot point is the weakest in the issue, and goes even further towards the already present idea of erasing the first arc of the book. Enchantress, Shade the Changing Man, and Windwarp are all gone from the book, and the plot has coalesced into a much more traditional team book after Milligan left the title. Lemire has added some humor, has tailored the team to his personal preferences, and made the book something that is unexpected; it has become the flagship book of the Dark corner of the DCnu.

Just as “Justice League” was position as the flagship book of the New 52, “Justice League Dark” has become the connective tissue between all of the Dark titles. Clearly, “Demon Knights,” “Sword of Sorcery,” “Frankenstein: Agent of S.H.A.D.E.” and “I, Vampire” all tie in here, but Madame Xanadu’s vision of the future shows Swamp Thing (along with Etrigan), and a chunk of the team is set to guest star in “Animal Man” in January.

And so, projecting ahead, the book appears to be what the Justice League is supposed to be: a place for the biggest names in comics to come together and team up, only for the supernatural characters. This means that people like Swamp Thing and Animal Man may wind up being part of the fabric of the book, as they have become the Superman and Batman of the Dark line, and what is the Justice League without those guys?

The book also manages to introduce new characters, like Black Boris or Nick Necro, and have them feel like old favorites returning, or take an older character like Tim Hunter, and make him seem fresh. The book succeeds on the New 52’s mandate to “tell good stories” without getting bogged down in continuity. All these characters work as part of the book, and the book works because of all the strong characters that are a part of its ever-expanding lineup.

This, of course, all plays into the recently leaked rumor about a Guillermo del Toro directed movie featuring a lot of these characters. If that is true, which seems highly suspect, then don’t be surprised to see the Dark books get ever more cozy, with Phantom Stranger and the Demon joining the team as well, all amping up for del Toro’s movie. Regardless if that manages to be true or not, the book is becoming something special under Janin and Lemire, and is well worth checking out.