Annual notwithstanding, we are at the end of the line for “Justice League International.” One of the more anticipated series of the New 52, primarily due to the wonderful, idiosyncratic work done on the title in the past, as well as in the recent “Justice League: Generation Lost” maxi-series, has bitten the dust. Have we come to bury or praise this 12-issue journey through international waters? 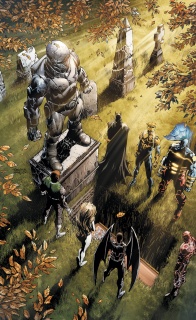 – It’s the funeral for ROCKET RED.
– Several members resign from the team — who will be left?

This is an odd position for a book to be in.

While “Justice League International” is closing up shop, this issue makes it abundantly clear that the Justice League International will, nay, must continue. Throw in the aforementioned annual coming out in 4 weeks (with a totally different creative team in place), and take a few of the clues scattered throughout this issue, and we are presented with this premise: this idea is good enough for a series, and the players are good enough to remain in place, but clearly the creative team isn’t. So, the problem is pretty easily fixed: swap out the creative team, right?

And yet, unlike “Catwoman,” “Detective Comics,” “Batman: The Dark Knight,” “He-Man and the Masters of the Universe,” “Superman,” and “The Fury of Firestorm,” a new creative team isn’t being brought into place on this book, a book that was the 76th best selling book in June (after news of its cancellation were already announced – although that is a pretty steady spot, as it was #72 in May and #67 in April), significantly higher than many non-cancelled DC (and Marvel) books. What about this book has “cancellation” written all over it?

Well, for starters, the plotting. This comic just isn’t that exciting or fun to read. Until the final arc, the team wasn’t really much of a team, and the issues were written in an extraordinarily generic way. This book also suffers from the “Aquaman” curse of having the main characters be openly mocked for no good reason throughout the series. When the characters are constantly being held up as the B-squad, why wouldn’t the average reader want to, instead, read the A squad?

Hopefully, because the characters are interesting and fun to read. Instead, we get a neutered Booster Gold, a non-insane O.M.A.C., a grumpy Guy Gardner, and an annoying Godiva. Only August General in Iron and Batwing are presented remotely as they have been in the past/are elsewhere. Throw on top of that the death of the breakout character from “Generation Lost,” the Gavril Rocket Red, and place the three interesting women in comas/the hospital (Vixen, Fire, Ice), and you’re left without too much to stand on. Especially when the most dynamic of the characters, Gardner, is in the featured cast of “Green Lantern Corps” each month.

The art isn’t exactly a problem, but Aaron Lopresti’s art is the definition of solid, almost to a fault. All his characters look correct, but his art is just a little bland. While he doesn’t do anything wrong anywhere in these pages, he doesn’t exactly stun you with anything, either. Sure, a team book is a challenge to nail, tone wise (especially with such diverse characters), but the art doesn’t offer anything that is particularly worth remembering ten minutes later. This issue is a pretty perfect example of that: the setting (a cemetery) leads to many possibilities for interesting layouts/well-framed panels. And while one in twenty panels uses shadow in an interesting way, or presents a character not in one of their action figure poses, overall, this book just lacks.

And this week it especially lacks, as Judd Winick (writer of “Generation Lost”) and Marcus To bring the JLI to “Batwing” and present an infinitely more interesting issue than Jurgens/Lopresti do. This also points to poor editorial control, as Winick writes the issue as if the team wasn’t losing key members (like, say, Batwing) at the end of “JLI” #12, so perhaps Winick didn’t know “JLI” was being cancelled, or that his character was being removed from it. To also used his setting, the African nation of Tundi, to inform each image, with little touches like adding the dust of the plains of Africa at the characters’ feet.

So where does the team go from here? Well, the annual comes out in a few weeks, and when it is written by a Co-Publisher and a Chief Creative Officer, it is probably a good bet that there will be ties to other books/events in there. In addition, there is a reference to Queen Industries providing their jet; Oliver Queen (Green Arrow) has been teased as a potential leader for a “different league” by Steve Trevor. Could these group be re-purposed as Green Arrow’s own version of the Justice League? Hopefully, that doesn’t mean a new #1 for a “Justice League International” book, but a new title with, hopefully, some more focus.

Or maybe the numbering will pick up in a few months with #13? Or maybe the group will continue to exist in the background, or as backups to the main “Justice League” team, which will have more of a rotating cast? Who knows; no matter the outcome, the feeling is the same – what a waste of potential for this book.