There is a sort of fundamental flaw that happens whenever comics try and reboot themselves, and it is a flaw that hurts both new and longtime readers. It is this: people don’t forget.

For fans who are used to seeing a character wearing a yellow costume, the blue costume will always be an alternate, just waiting to be reverted to its original status. Artists who have drawn a character as a lecherous womanizer for years, even if they try to come at the same dude as a loving family man, will always put a glimmer of sin behind his eyes; writers who are used to having two characters hate each other may wind up with those characters as partners on a team, and so will throw in more sarcastic jibes merely out of habit.

And that very idea, that people don’t forget, is what damned “Justice League International” from the start in the New 52.

As a warning, be aware that major spoilers are discussed. 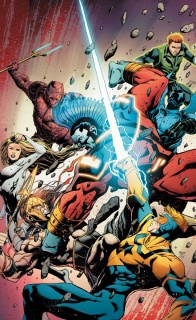 – Will this issue be the final adventure ever for JUSTICE LEAGUE INTERNATIONAL? – The true nature of O.M.A.C. revealed! – Ties in to the shocking events of JUSTICE LEAGUE #12! – Guest-starring BLUE BEETLE!

The fundamental character trait for the pre-“Flashpoint” Booster Gold was that he was a jackass. Specifically, he’s a jackass from the future who cares more about money and attention than he does about anything else. This isn’t to say that he’s a bad person, because he always winds up doing the right thing; it is just that he always takes the longest possible route there.

In the New 52, readers are supposed to be able to pick up any book from #1 and have all the information at their disposal to enjoy these characters. If you picked up “Justice League International” #1 – hell, if you picked up the whole run – you would see characters using the classic description of Booster left and right. Guy Gardner, in particular, chastises Booster for being obsessed with fame, endorsements, and getting rich.

The problem is, the character hasn’t done any of that in his adventures post-“Flashpoint.” Sure, he’s wanted to get the JLI together, but mainly because Batman is telling him how great he can be. I don’t know about you, but if Batman believed in me, I’d probably be a little more bullish on my talents than I am now. And yes, Booster probably spends more time than the other characters talking about what the public thinks, but he isn’t presented as anything other than an overzealous pleaser. Even the trademark humor, the element that made Booster Gold one of the more popular C-list heroes of the past 25 years, is almost totally absent from “Justice League International.” Dan DiDio and Geoff Johns, two writers who seem to like having humor as part of their stories, take over for Dan Jurgens, Booster’s creator, on this annual. Jurgens presented the blandest version of his creation possible, and so any change is a positive one.

But the issue still remains, even in the hands of Johns and DiDio: the entirety of this annual is predicated on the idea that Booster Gold is a liar and an idiot, but there is no real evidence of that. Because he is railing against a straw man, Guy Gardner comes out like a huge jerk – again, missing his trademark sarcasm and “the guy you love to hate” attitude. Gardner is only present for the first quarter of the book, but it is all spent with him arguing with Booster, and mostly over him not believing what Booster is telling him. It doesn’t matter that it turns out that Gardner is right; what matters is that the protagonist of the story is constantly picked on, and so the overwhelming emotion that the character elicits from readers is puppy dog sympathy.

Besides sympathy, the real emotional moment of the issue turns out to be a misdirection. August General in Iron, one of the more interesting characters throughout the series, is beheaded by O.M.A.C. and, presumably, killed. Oh wait, psych! No he’s not. While I’m personally glad his adventures will continue, why do this? When Rocket Red died early in the run, it was shocking and sad, if a bit premature. Killing August General would have shown how O.M.A.C. truly takes over Kevin Kho and shows how dangerous he is; by having him beheaded but not dead just looks stupid.

Jason Fabok, soon to be the regular penciler on “Detective Comics,” does an admirable job here, without doing anything all that memorable. This is a tough team to draw, between O.M.A.C.’s electric mohawk, August General’s armor, Godiva’s hair, and Blue Beetle’s scarab, but Fabok handles each character well enough. Some of his facial work isn’t all that consistent with how the characters were drawn in the main title (mainly Booster’s larger nose), but for the most part, everyone looks as they should, and his action work is impressive. The battle scenes all feature interesting angles, and his violence seems painful and real. I think he’ll be a great fit on “Detective.”

The annual is also an opportunity for Dan DiDio to bid farewell to O.M.A.C. once again (before he does so again in “DC Universe Presents” #0 next month), and so we get to see a lot of O.M.A.C.tivation, including a new programmer taking control of Brother Eye. On one hand, I applaud DC for not just discarding characters from cancelled books, but rather developing a deep bench of characters, villains and stories they can revisit at will, or dump into other books. But on the other, I keep wondering that if there are all these plans for O.M.A.C., who led a poor-selling but critically acclaimed book, why not keep that book around? Or even why not put him on a team that won’t have its book cancelled just a few months later?

However, the real purpose of this annual is to shuffle the deck for these characters and put them in places where they can thrive, post-“Justice League International.” Most of these characters don’t have other books to return to, and so each of them is set off on a path where their story may pick up in a month or in five years. August General in Iron and Godiva (along with the Olympian) are mentioned as eventually starting the Global Guardians, a team that I can’t see sustaining a book right now, but one that will surely pop up in whatever huge crossover is next to fight a villain in some remote location (think Freedom Fighters in “Final Crisis” or The Great Ten in “52”). O.M.A.C. is on the shelf until he’s needed next, and Booster Gold is somewhere, presumably lost in time.

Of the characters with their own books, you have Gardner making “Green Lantern Corps” his only monthly book and Batwing deciding the DC to Africa commute was too much for him. Except that he made that same decision at the end of “Justice League International” #12. Did he reconsider, only to quit again, or is this just a little editorial sloppiness?

Editorial cleanliness is sort of the reason for this annual, as the story is a self-contained one without too much impact on greater DCU, despite many claims to the contrary. Sure, little things were hinted at: Brother Eye as a future Batman villain, the Global Guardians, a potential shout out to Vibe (a “dimensional specialist from Detroit” who can sense “vibrational anomalies”), but this isn’t exactly the year 2 of the DCnU cipher the book was sold as.

What the book did do nicely was to give Booster Gold something interesting to do. When Booster and Rip Hunter travel through time, good stories tend to come out of it, and that is where it looks like Booster is going. This is yet another nod to pre-New 52 continuity, but since Booster was the only person to remember the old continuity during “Flashpoint,” it makes sense that he exists somewhere outside of the traditional perception of time and space.

It was interesting to bring Blue Beetle into this team, however briefly. “Blue Beetle” as a series is suffering from poor sales and critical lamentation, but Jaime Reyes is a truly beloved character. He disappears into “The Reach” at the end of this issue, and it appears that the next arc of his book takes place there. I could see “Blue Beetle” being in the next wave of cancelled series, but I could also see the book being either relaunched or simply retitled as “Blue and Gold,” and let Booster find him in the Reach, and the two of them could have adventures through time. I know a lot of people who would buy that book, and it would probably sell better than a solo book for either character. A Booster-centric series is clearly coming, and if Beetle and Hunter (and maybe even Alexandra Gianopoulos, the character Booster was going to pull out of the “Flashpoint” timeline) are parts of it, it would make for a fun series.

What wasn’t a fun series is “Justice League International,” and that is a real shame. The book had such a great lead-in from “Justice League: Generation Lost,” as well as such a deep history of fun comics with that title. But fun comics don’t appear to work in the New 52, at least not yet, so this book has been cancelled, with this annual as its last statement before the inevitable relaunch of this book in 2018. Hopefully whoever writes it then will realize that the humor and mutual affection these characters have for one another is what will make the book work that time. Because this time, it fell flat.