Today, three comics were released with the words “Justice League” in the title. The “main” title dealt with ranks expanding, the most ancillary dealt with the realities of being a superhero as a teenager; this one didn’t really do anything. 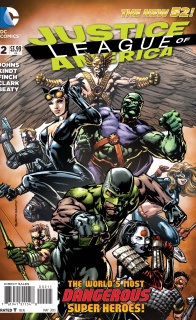 • The new Justice League of America team continues to form, but the question remains: What do these heroes want in return for their membership?
• Secret motives are everywhere, and the outcome will have a huge impact on this team and the rest of The New 52!
• Plus, the alien MANHUNTER’s back-up series begins revealing more about J’onn’s plans for this team…and the other Justice League.

The most frustrating element of new series in the Marvel NOW!/New 52 era is the reluctance to just start a fucking story.

The 50 or so pages of the main “Justice League of America” book, over two issues, has featured next to nothing at all. It’s not “Age of Ultron” bad, but this book has had more talking about the Justice League than actual Justice Leaguing by a 10 to 1 ratio. The first issue needed to introduce the characters – no one doubts that motive – but why does the second issue have to do it all over again? Something the New 52 has been obsessed with is showing us the first time characters met. This is a rom com trope that has somehow become the driving thrust behind decisions at DC (hell, the entire pitch of “Batman/Superman” is predicated on their first meeting). Spoiler alert: most first meetings are boring as hell.

So, while we get to see Vibe ogle Catwoman’s Herculean amount of cleavage, we don’t get to see anything that is all that interesting. This feels like an alternate pitch for the first issue, and instead of someone at DC choosing one over the other, they said “do both!” The 17-page story could lose all but about 5 pages and the reader wouldn’t lose anything of import from this issue.

The most interesting scene in this issue has nothing at all to do with how it moves the plot forward, or what it reveals about a major character. It involves Hawkman’s entrance to the meeting room where the JLA is first gathering. When I read the scene, I thought “I know I’ve read this before. But where?” A quick Google search brought this up – Geoff Johns spoke of it almost verbatim back at San Diego Comic Con 2011. :

Johns said that Hawkman is also a member of the JLA, and “they’ll be having a meeting, he’ll show up and a big bloody mace hits the desk. They look up and Hawkman’s all covered in blood. He says, ‘don’t worry, it’s not my blood.'” (Via Comic Book Resources)

I don’t know if I should be impressed that Johns had “Justice League of America” #2 scripted almost two years ago, or disappointed that Johns felt this was such a good idea that he had it stored up for this long, just waiting to use it. But that scene is weirdly indicative of the whole issue thus far – this feels like the depository for all ideas that didn’t quite fit in elsewhere for the entire 19 month experiment that is the New 52. This is where the Wonder Woman/Steve Trevor relationship can be compared to the Batman/Catwoman romance, this is where some of Johns’s pet characters can hang out while no one else is using them, this is where the charred remains of “Team 7” can come out and play.

On the plus side, Johns is just the guy to write that sort of book – a continuity geek who loves to mix and match characters, he seems almost preternaturally drawn to complexity. However, David Finch appears to be the absolutely wrong guy to draw this book. The issue starts off strong, with some truly creepy, great Scarecrow pages. When playing in the Bat-sandbox, Finch does things that few can approximate, but here only some of the stuff is Bat-related, and so the rest seems horribly out of focus. Stargirl looks nothing like the pretty, well loved girl she’s written as – she looks like a hormonal, brace-faced mess. While Katana looks fine, Hawkman looks like he’s so heavily shadowed because Finch just doesn’t quite know how to draw him. But the most egregiously awkward character is, surprisingly, the one most associated with Batman: Catwoman.

I mentioned her cleavage before, and while I don’t want to harp on a fictional character’s breasts, her costume in this issue shows more of her chest than Jennifer Lopez’s famous Oscar dress. There must be a lot of two-sided tape in play here just to keep her from busting out. However, Finch draws them in a way that maximizes the cleavage, but minimizes the breasts, if that makes any sense at all. Instead of looking sexy, it winds up looking just weird and desperate. And while the character might be a desperate one in some ways, there is no way that this is intentional. Finch is best at drawing action, and this book has so little of it that Finch winds up overdrawing things like trees or hospital room blinds, or over-shading everything, because he’s used to doing much different things with his pages than showing terse conversation or casual acquaintances.

The best part of this comic, hands down, is the backup by Matt Kindt and Scott Clark, which focuses on Martian Manhunter and a particularly important mission he must go on. The backup plays into a small element of the main story in a way that is enjoyable without feeling either supremely important or tossed off. It is a deleted scene of sorts, but one that could have worked fine within the main story. Clark’s art looks incredibly sharp compared to Finch’s, and he truly excels at making J’onn look alien. Kindt’s writing reflects the espionage backdrop of his monthly book, “Mind MGMT,” and works as a post-script to the main book. It feels like a shame that Kindt and Clark are relegated to backup duty, but the two make the most of it, and tell a story that works in its simplicity and its purpose.

The rest of the issue doesn’t fare that well. What is so frustrating about this comic is that all the elements for a really great Justice League book are here – quality characters, a compelling story, and room for growth. However, Johns and Finch spend so much time making sure that everyone under the sun knows exactly who each character is, that no one has the chance to do anything interesting enough to make you care who each character is. After a relatively solid debut issue, this brings the series back a step. Let’s hope next month something happens, and the book is given a chance to excel – because as it stands, it’s a less interesting read than “Vibe.” Really.