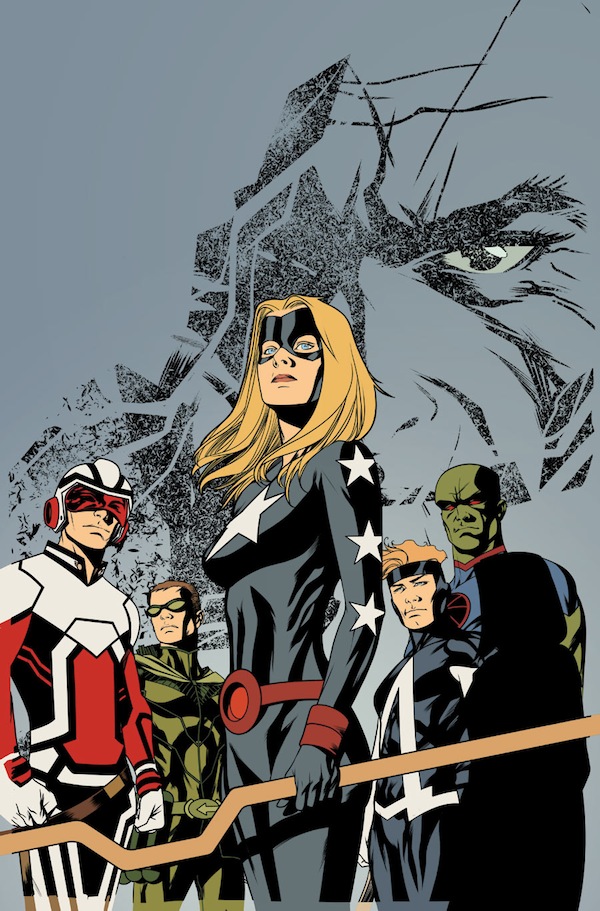 The newest incarnation of the Justice League continues their battle across the Great White North, while an even more powerful enemy targets the team in “Justice League United” #1 from Jeff Lemire and Mike McKone.

As a note, mild spoilers are discussed. 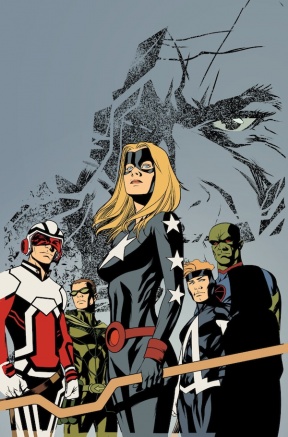 In Canada, the team of Animal Man, Green Arrow, Martian Manhunter and Stargirl is joined by Adam Strange to fight an unstoppable forced called the Unimaginable.

The latest spinoff of the “Justice League” franchise is only two issue old, and it’s already breaking some established comic rules. The series began with a #0 issue, which are normally used as prologues and setup to the main story, and “JLU” #0 actually was the true beginning of the story. Yet writer Jeff Lemire seems to have taken the possible confusion that this numbering could cause, and makes sure that this #1 issue is as accessible as possible.

The issue begins where new Justice League team has come together in the unlikely location of Northern Ontario to fight a giant sized monster. While at first it seems like a being as powerful as Martian Manhunter would punch through anything, it becomes apparent that this battle won’t be so easy. Adam Strange, Animal Man, Stargirl and even Green Arrow display some major heroics during the battle, which ends up spanning half a continent. Meanwhile, there’s a whole other subplot involving Lobo and Hawkman fighting to near death, and a genetically engineered alien that will be able to destroy whole worlds. Bit of leap from small town Ontario.

With any team book, the most important ingredient is balance, and Jeff Lemire really nails this aspect of this entire issue. The book opens with a bloody battle between Hawkman and Lobo, setting the reader up for another gritty and real serious-like New 52 story, which makes it a pleasant surprise when the page turns and the big battle is actually filled with humor. Green Arrow and Animal Man almost steal the show, which makes sense given Lemire’s familiarity with the characters, with a Green Lantern/Flash or Booster Gold/Blue Beetle dynamic between the two. It would have been easy for Arrow to turn into the Batman of the group, with the lack of powers and adherence to one color, but Lemire makes sure Oliver Queen is charming and not broody.

While Green Arrow and Animal Man have some great moments, Lemire makes sure that the issue puts equal focus on the entire team, with every character getting at least a panel in the spotlight. Adam Strange finds a costume, Stargirl gets a great introduction to new readers, and Martian Manhunter shows off a powerset that puts Superman to shame. Stargirl and Martian Manhunter have another interesting dynamic, having bonded during the events of “Forever Evil”, and now have a mentor/student relationship. Lemire has accomplished the immersive feat of giving readers reasons to care about and relate to all the characters, while setting up their unique personalities.

Well, maybe except for Hawkman, but no writer has cracked that nut just yet.

Mark McKone has pencilled just about every character at the Big Two companies, from Spider-Man and the Avengers to Superman and the Teen Titans. This experience makes a great choice to draw a team book with such a diverse range of powers. Like regular “Justice League”, “United” presents the artistic challenge of having gods like Superman and Martian Manhunter fighting next to everyday schmucks like Batman and Green Arrow and making the whole thing seeming remotely possible, but McKone gives everyone equal attention, never shortchanging Oliver’s arrows for Stargirl’s cosmically charged staff.

McKone’s style does lean more towards the realistic side of things, but he retains enough fantastic flourishes that he avoids the trap of New 52 stiffness and unthinkable levels of moroseness. This is a fun looking book, and it is actually the harsher moments with more visceral violence (such as when Hawkman gets his arm chopped off) that seem more out of place with the tone of the issue. McKone’s art is very clear and detailed, which is a great benefit when enormous monsters start disintegrating. No one gets lost in the mix, and even when the characters are dwarfed by their enemies, no one is reduced to a small blob of color.

And speaking of color, a special mention should be made of colorist Marcelo Maiolo, who has done wonderful work on the Lemire-penned “Green Arrow”. Maiolo’s use of black and white with small flourishes of color are stand out panels in every issue of “Arrow”, and this technique is used in this new series to pay homage to the story’s Canadian setting, with Maiolo’s further employment of red and white to highlight pivotal moments.

“Justice League United” #1 should really be “Justice League United” #2, but it’s still early enough in the run for readers to get on board. Jeff Lemire has crafted a fun, entertaining book that only dips into New 52 grimness momentarily. The cast of DC B-Listers coalesce very well, and everyone gets a chance to prove that they deserve to stand next to the regular Justice Leaguers. Mark McKone pencils large super battles that remain thrilling without ever getting confusing, and even manages to make the redesigned Lobo seem not completely stupid.

This is a fun book and, numbering issues aside, readers should definitely take a shot on these new northern warriors.