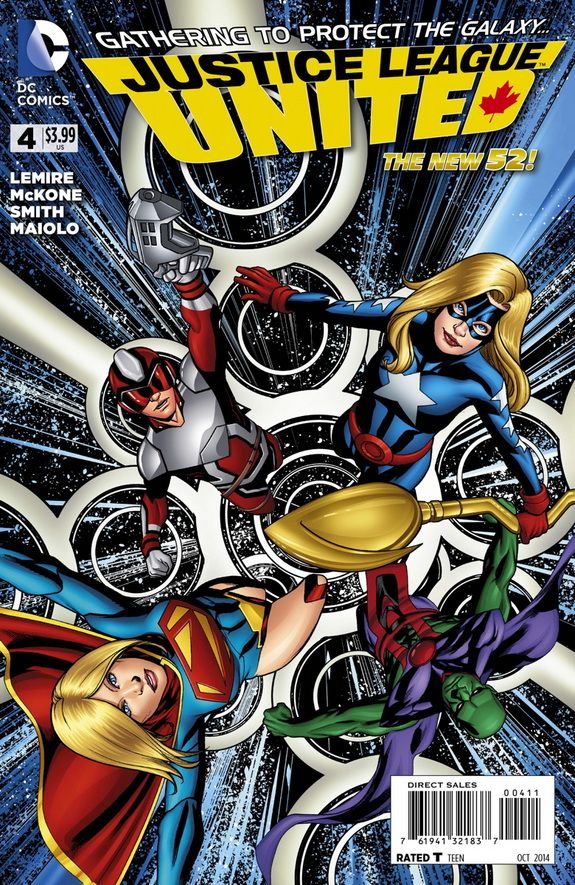 As the first arc of “Justice League United” comes to an end, Jeff Lemire and Mike McKone have proved that a little bit of fun and cosmic adventure is just what the DC Universe needs. 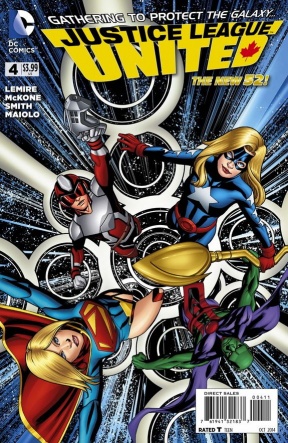 The biggest problem with “Justice League of America” was that the series was created to fulfill a specific story and tonal requirement. In retrospect, the series was primarily all set-up for ‘Trinity War’, which in turn was just set-up for “Forever Evil”. That placed the series in the middle of DC’s rebranding crosshairs. Grim and gritty seems to have been the mandate for the New 52 and “Justice League of America”, nestled firmly in the genre of superheros-get-involved-in-morally-ambiguous-government-officals, seemed almost a perfect encapsulation of DC’s new house tone.

The result was a series that, while far from terrible, felt inorganic and just a bit manufactured. Sure, Vibe scooting his chair away from a bloodied Hawkman was good for a solid laugh, but that scene was the exception to the overall tone of the series. Now that the rebooted “Justice League United”, with a team of new creators and far greater story freedom, has completed its first story arc the series has become an example of good ol’ fashion superhero adventure and a beacon of lightness in the New 52.

The issue is split between two stories, one that concludes the group’s first cosmic journey, while the second sets up the future of the northern franchise of the Justice League. The majority of the group have been on the far away planet of Rann, where Marian Manhunter has bonded with Ultra, a young alien with enormous and dangerous power. Their attempts to keep Ultra safe, however, also resulted in the death of Hawkman, leaving the team in shock and threatening to cause war between Rann and Thanagar. Now the League must deal with the fall out, and prepare to return to Earth.

One of the first things that comes across when reading this issue is the distinct lack of action. The big alien space fight climax has already occurred, and writer Jeff Lemire treats this installment as more of a character piece/epilogue, wisely avoiding the temptation to shoe horn in one more fight. The JLU team is still new, and while a couple of the members have history together, the majority are strangers to each other. Lemire gives the characters time to bond and establish identities beyond just the stoic one, the one with kids, and the one with no powers. It helps them feel like they have a real dynamic, and not just a bunch of B-characters that editorial threw together. Lemire has a great knack for dialogue, and while nobody goes around spouting monologues at each character, each character reveals a lot about themselves with their limited amount of words. It’s not surprising that Green Arrow and Animal Man come across as the most full formed, given Lemire’s extensive work with the characters, but he is sure to give insight into every member of the team.

Given the aforementioned lighter tone and style of “United”, the recent death of Hawkman seems to be a bit at odds with the rest of the series. His demise certainly hangs over the issue, and all the characters are affected by it and mourn for their teammate, especially Martian Manhunter who gets the requisite hero-guilt. Lemire doesn’t let the book get super depressed or angst filled, however, as that would greatly clash with the established outlook of the book. It’s also possible that, given that Hawkman’s appearance in “Future’s End’ already indicates his eventual return, Lemire is aware that readers would see an attempt to get dramatic anguish from Hawkman’s present demise as downright disingenuous.

Mike McKone has down some great work on “United”. He has successfully combined the more realistic look DC editorial surely expects from a “Justice League” title, with the more stylistic and fantastical aspects of Lemire’s “Animal Man” and “Green Arrow”. The journey through space to Rann has given McKone the chance to show of some nifty new character designs and different settings than rural Ontario. Rann looks appropriately alien, with detailed cityscapes providing the background of scenes. The Ranns (Rannions? Rannites?) themselves are bright and colorful, and fit into the lighthearted tone of the book without looking, you know, really dopey.

The second storyline follows Alanna Strange, wife of Adam, back at JLU headquarters where readers last saw new character Miiyahbin get kidnapped by a monster right in front of her friend Heather. Alanna finds Heather and soon they are hot on the freezing cold trail of the monster and the young woman. The bulk of the action occurs in this storyline, but even then Lemire uses the opportunity defies typical superhero fight tropes. The monster that Alanna and Heather catch up to is more of demon out of “Animal Man” than something Superman could punch into submission. Thankfully Alanna immediately proves herself to be a wicked badass, Boba Fett style; the whole story is well paced, with just the barest amount of exposition. The monster doesn’t even get a name or explanation, and it really doesn’t need one, as its purpose is to develop Alanna and Miiyahbin’s character traits. They both come off as brave and determined, like they belong on the JLU team.

McKone gets to juxtapose two different elements of his style in these scenes. The backdrop of frozen, rural, northern Ontario is downright bland when compared to the sprawling skyscrapers of Rann. The barren setting, however, makes the monster look even more grotesque and otherworldly. It’s the most satanic looking deer ever, like the evil genie from Aladdin with a pair of 30 foot antlers. The pages alternate from realistic alien city to swirly nightmare forest creature and none of it feels out of place. McKone seriously impresses in this issue, and it seems like he’s perfectly capable of handling anything that Lemire’s sometimes twisted mind can throw at him.

This issue is the finale of the first arc of “Justice League United”, and it is far from the explosive climax found in typical superhero comics. The big cosmic fight has already happened, and instead Jeff Lemire spends the time exploring and fleshing out the characters, and setting up some larger plot threads. Mike McKone shows up some serious talent, and pencils everything from realistic cities to Canadian winter demons without missing a beat.