It is absolutely amazing to me how, after reading “Kings Watch” #1, Jeff Parker and Marc Laming have created a completely accessible, fully formed world with memorable characters, a clear vision, and intrigue. What is so amazing about this is that there are some books at the Big Two entering their second or third year with far less developed characters of interesting plots. 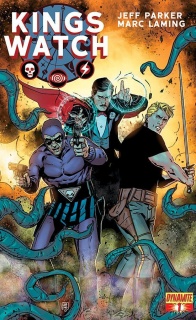 Panic spreads across the world. Strange phenomena fills the skies. Millions have nightmares of wild lands filled with horrible creatures… then wake to find the monsters are real. What are three men willing to sacrifice to save us all? Superstar writer Jeff Parker (Dark Avengers, Red She-Hulk) and artist Marc Laming (Planet of the Apes) deliver the earth-crushing event of 2013, featuring Flash Gordon, The Phantom, and Mandrake the Magician like you’ve never seen them!

I fear this will out me as older than just about everyone reading this article, but I have very fond memories of watching a show called Defenders of the Earth when I was a little kid. At the time, I had no idea that these were all King Syndicate-owned comic strip heroes; all i knew was I had the toys, I never missed an episode, and I still think the opening credits theme is pretty sick. Since the end of this cartoon, and aside from both the gloriously cheesy, Queen-soundtracked Flash Gordon film, and the equally lame Billy Zane-led The Phantom, I had very little exposure to these characters in the past 25 years. So, even though these characters trigger nostalgia for me, it isn’t as if I have a lot of expectations for this book.

In fact, if it wasn’t for the creative team, I may not have checked it out at all. I don’t need to list the reasons why Jeff Parker is awesome, but Marc Laming might not be a name you’re instantly familiar with. I first became aware of him in 2011 when he drew the Boom! title “The Rinse,” a really fun modern day noir. His work here is totally different than what was found in “The Rinse,” but it shares his attention to detail and his masterful world building.

And it is in building the world that the modern day setting for the book becomes clear. These characters are all classic-looking enough that, judging from the cover, it could take place in any time period post-1930 probably. However, Laming uses the pages to place the story squarely in the modern world without having clunky winks and nods to it being 2013. He and Parker update these characters and their surroundings by simply focusing on the elements that matter. The Phantom, now more grizzled, is a jungle dwelling fighter, not afraid to take on a weird dinosaur-ish creature; Flash Gordon is brave and impulsive; Mandrake is mysterious and mystical. Sure, these may be some of the archetypes that so many others have been based on, but nothing in the book feels dated, or even overly referential.

The three main heroes, along with Lothar, (at least in the past incarnations) a friend/assistant to Mandrake, don’t really interact at all in this issue; each characters is framed doing what they do best, and give the opportunity for fans, new and old, to connect with the characters. Of all them, the Flash Gordon stuff probably works the best, if only because we get to see the most of his supporting cast. Seeing his father, as well as Dr. Zarkov, allows Flash to be as impulsive and hotheaded as he can be, because he has the grounding around him. Lothar plays a similar role to the Phantom where, since Lothar is protecting the people on his tour, the Phantom can right fuck up a dinosaur without needing to worry about saving lives. Whereas his actions both he and Lothar to be heroic in different ways, Flash’s bravery is bordering on irresponsible.

If the book has a glaring weakness, it is that Mandrake is not utilized all that much. His segment of the story more utilizes him as a background character to the crazy nightmares that take center stage. His story, I’m sure, is coming, but right now he seems the least integral of the three main heroes. As a side note: it is interesting how Lothar has more page time than almost any other character, yet he isn’t presented as one of the main characters. I wonder if this is because of a lack of recognition, or a desire to not give off a weirdly racist vibe by having him as Mandrake’s servant/assistant, as he has been portrayed in the past.

The biggest problem with this book is that it is only a miniseries. Parker and Laming really killed this first issue, and Dynamite, in general, has been bringing in a lot of really great talent as of late. Hopefully, the success of this book will lead to more stories with these characters, hopefully from this creative team. I really did not expect to find this book as one of, if not the, best #1 of the year thus far, but I’m hard pressed to find a debut issue I enjoyed this much in the past 12 months. This perfectly paced, fun without being silly, apocalyptic without being dreary, re-imagining deserves your eyes and your dollars.

And while you’re at it, go watch that Defenders of the Earth intro again. DEFENDERS!