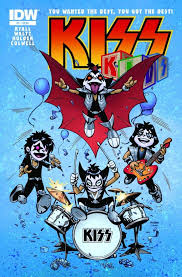 IDW releases its new all-ages series, “KISS Kids” and as adorable as it is, one question remains: “Why?!” 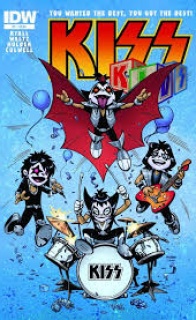 Presenting the adventures of Li’l Demon, Starchild, Catkid, and Spacey… the KISS Kids gang! This rockin’ new comic offers adventures for all ages (and many in-jokes and familiar characters for the KISS faithful, too). No blood or fire here, just laughs and fun tales of the little costumed maniacs and the crazy town in which they live.

I love all-ages comics. I think they’re incredibly important so that there’s a definite market of comics for kids so at least some children won’t accidentally have their first comic accidentally be a Scott Lobdell one. “KISS Kids” follows the IDW tradition of all-ages based on popular properties that offer fun, cute, stories with absolutely adorable art. Seriously, Jose Holder’s art on that book is friggin’ precious. He makes Gene Simmons look better than he ever has since 1973. That’s not exactly hard to do, and it’s accomplished by making him an adorable eight year old, so take that for what you will. Really though, Jose Holder actually does a great job with making a band known for being old and crusty lovable. The innocent little stories that make up this book, sweetly written by Chris Ryall and Tom Waltz, wouldn’t be nearly as sweet without an artist like Holder. In all seriousness, if you have a little kid and you want to give them something innocent as an alternative to DC’s gritty stuff or Marvel’s “No this issue is genius because it’s about the main character’s homeless brother.”  “KISS Kids” isn’t exactly deep but it’s certainly enjoyable and hardly talks down to any young readers.

That said, what type of audience was IDW trying to go for with this book? I recommended this to your kids but only if your kids are those really young types who don’t know what a Paul Stanley is. Heck, I had to Google who the other two members were. Turns out their names weren’t “Catface” and “Other One.” KISS is an old band at this point and basically anything they’ve done post 1980 should be kept far away from a young innocent mind. It’s not even like kids born after 2000 would really have parents who were huge KISS fans. If this was published in the 80’s or 90’s, that would be acceptable: it’d be an adorable way to introduce kids to the reasons their moms are constantly itching. Kids nowadays though? They’d want a band more current like One Direction or Linkin Park. KISS is so far away from this younger generation’s zeitgeist that it couldn’t possibly have been made with that audience in mind. It still works for younger kids, sure, but they’d have definite questions as to who these people are. Please don’t let your kids google Gene Simmons. Especially with SafeSearch off. Please.

So if this book wasn’t made for kids, then it must’ve been made for the hardcore KISS fans right? Probably, but KISS fans are a hardcore bunch. Really, if you manage to think the first band you ever heard of is the best band ever for your whole life then you’re one of the baddest people alive. As a result, could they really accept buying a book where their metal icons are little kids dealing with issues like buying shoes for the first day of school and babysitters? I hope so, because for the most part that’s what the whole book is. There’s still a ton of shout-outs to KISS history though, the chapter about the babysitter is titled “Christine Sixteen.” You know, like the song about underage sex. That’s in a kid’s book.

If this book isn’t for kids, and it’s not for hardcore KISS fans, then that must leave a third option: the deranged. The awesomely deranged. Halfway through the comic, an evil team of duplicate KISS robots show up with absolutely no forewarning or explanation and the normal KISS kids only get away because Ace Frehley opens a hole in space-time to get away. Before this, Gene Simmons’s boots come alive for no reason and eats the other kids’ shoes. Finally, Paul Stanley fakes his own hanging in a mall because he hates back-to-school shopping. Maybe this book isn’t hardcore in the way KISS fans are expecting (fire, heavy metal, make-up on decrepit ruins of aged rockstars) but it is absolutely insane in its own way. Or maybe KISS shows do involve child robots flying around and attacking the band while the guitarist bends space and time; concerts get more and more advanced each year. That said, if you’re looking for an adorable little book for your child who won’t ask questions or for a pretty insane, yet somewhat heartwarming, comic, “KISS Kids” might be for you. Unfortunately, I’m afraid that Multiversity Comic’s hardcore KISS fans will be somewhat disappointed here.

Final Verdict: 7.1 – Browse. Pretty fun book for kids, not much more than a distraction for anyone else.