I’m a huge time-travel nerd. My G-Chat status is always “Destroy the Time Phone,” an inside joke between some friends that another, amazingly talented friend turned into a short film (not starring me, though my voice does make a cameo). Back to the Future is my favorite film, but Primer isn’t too far behind.

So, put differently, I should love “Legion Lost.” Despite not being a huge Legion of Super-Heroes fan, the mix of superheroics and time travel should be enough to get me excited every month. And yet, the debut issue was widely regarded as one of, if not the, worst issues of the entire New 52, so I avoided this book like the plague, only picking it up when it became part of ‘The Culling,’ a disappointing crossover between some of the ‘Young Justice’ line of DC books. 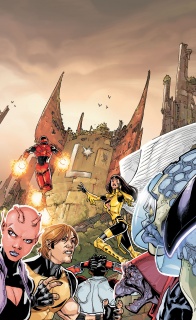 – The LEGION LOST team must decide which fate is worse: staying and dying in the present or returning to a future that may be totally different from the one they left behind!
– Accused of being terrorists, the LOST LEGIONNAIRES are hunted by the new METAMERICAN and his META-MARINES!

The issue begins with the Legionnaires in a Time Bubble, trying to get back to their native time, the 31st Century. But when they arrive, they find a destroyed civilization, with no trace of their teammates, or any clues as to what happened. This is a fairly common time travel trope, and one that usually results in, you guessed it, more time travel! The series would cease to be necessary if the Legion were, ahem, lost. So, back to the 21st century they go, to try and ascertain why exactly their time is destroyed.

Of course, more than just that happens – there are interpersonal conflicts, technological problems, lots of brooding, and a few scenes set in modern times of the US Gov’t trying to capture the Legionnaires. But the book is basically a trip to and from the 31st century, and therein lies the problem with this series.

A far more interesting book would be the team lost in various times throughout the timestream – medieval Europe, 49th century Mars, a pre-superheroic 2001 in New York City. But instead, the team is “stranded” in modern times, making them a less-interesting Teen Titans. In addition, because the Legion books are pretty self-contained, it can be an intimidating book to just jump into.

The characters are surprisingly well-developed, with each character’s motivations laid out in this issue relatively clearly, while also taking a little bit from ‘The Culling’ and using it to push the book forward, mainly by asking the question, “what if Harvest was actually trying to save the future?” Add in Wildfire’s broken containment suit, Tyroc’s prophecy, and Timber Wolf’s discovery that his 31st century teammates assumed them dead, and you have a well written, interesting comic that has some gravity to it.

Add to that the solid work of Pete Woods, and this comic gets even more appealing. Woods, inking his own pencils, adds a refined touch to the proceedings, adding some depth and class to the characters. Woods, who is one of the very few artists to work on each issue of the run in the New 52 (although Mike Camp shared duties on #5 and Woods only inked #8), does overall fine work here on, frankly, a lower-tier book. I’m pretty surprised that Woods hasn’t been drafted to a high profile book, especially following his fantastic “Action Comics” run with Paul Cornell.

Overall, this book impresses in all ways but its concept, and unfortunately, it is that concept that will ultimately get this book cancelled; the book simply can’t be interesting if it continues indefinitely. If they are always lost, the book becomes dull; if they get back to the 31st century, the book is redundant; if they decide to settle here, it’s yet another teen heroes book without a real purpose.

Hopefully, internally, there is an end date in mind, and DeFalco and Woods can bring this to its conclusion, because the team has been working quite well together, especially considering the problems with the book when original writer Fabian Nicieza was on it. I went into this expecting something bland, and am happy to report I was proven wrong.