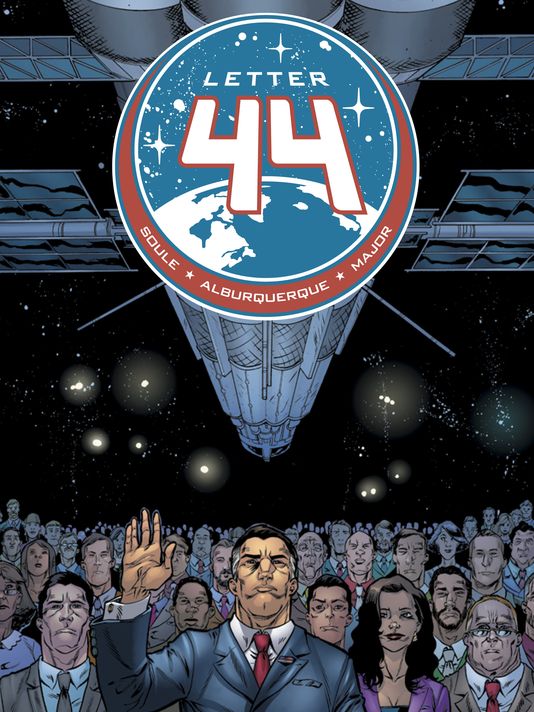 Let’s face it: there’s a lot of fun to be had with a good conspiracy theory now and then. Capitalizing on the thrilling idea of a government keeping a huge secret, “Letter 44” from Oni Press puts forth a plausible and terrifying alternate world. 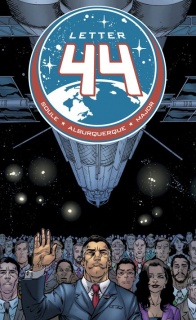 There’s something up there. As newly elected President Stephen Blades reads the letter left for him in the Oval Office by his predecessor, he learns this stunning secret: seven years earlier, NASA discovered an alien construction project in the asteroid belt. A crew of heroic astronauts was sent to investigate, and they’re nearing the conclusion of their epic journey. Don’t miss the first chapter in this thrilling tale of real-world space travel, intrigue, and secret histories!

President Blades has his work cut out for him. Inheriting an America that’s not terribly dissimilar from the one George W. Bush stood at the head of, he’s got a million issues to address and a lot of campaign promises to follow up on. But before he can even get started, a letter from the previous president turns his world upside down. Yup, there’s an alien mining operation going on in the asteroid belt, and the American government has been keeping it a secret for years.

Faced with all the myriad implications of this secret, Blades is more than a little overwhelmed. Communicating with the astronauts who are about to rendezvous with the station isn’t terribly comforting, either – they’ve been out there a long time, and are definitely keeping some secrets of their own.

It’s not a complex central concept, but it’s an incredibly rich one, and the main strength of Charles Soule’s writing here is that he doesn’t trip over himself, exploring every consequence of this massive secret. Rather, we’re led step by step into the thick of it, viewing the world more or less through President Blades’ eyes and feeling all the abject terror and awe of his position.

The astronauts, meanwhile, are a diverse group, but we get a good feel for their team dynamic in a short amount of time. They’ve built up a world of their own in the years they’ve spent together, and are facing some pretty dire odds – two factors which make peering into their daily life all the more fascinating.

The only real hiccup here is that occasionally a line of dialogue won’t ring true, and come out a bit stilted and formal. It’s not a vital issue, but it’s noticeable, and feels like a departure from the realistic and understated feel of the story.

Alberto Alburquerque’s art – the character portrayals in particular – takes a bit of getting used to, making use of unusual anatomical proportions and slightly exaggerated facial features. However, the delicate expressions keep the characters sympathetic and engaging despite the unconventional style, and in the end, the slightly “different” look of the comic fits in nicely with the novel and disorienting situation President Blades finds himself in.

The technological details that populate the background are beautifully executed, adding that much more realism to a tale that already feels strikingly real, and from the movements of the astronauts in zero-G, to the design of their spacecraft, it’s clear that Alburquerque has done his research. It’s all set out with simple and clear visual storytelling, keeping our sights set firmly on Blades’ predicament.

Guy Major’s colours, meanwhile, are restrained but pitch perfect, lending a neat gloss to Alburquerque’s work. Shawn DePasquale’s letters, on the other hand, sometimes seem a little out-of-place. A larger than normal font size, as well as a tendency toward letting the white space of the speech bubbles run over into the gutters, detract somewhat from the overall flow.

All told, this is an exciting read that’s troubled by a few hiccups but still suspenseful and enthralling. And while there’s no shortage of sci-fi comics these days, in terms of polish and out-and-out intrigue, “Letter 44” already stands out as a unique and arresting piece of work. This will be a second issue worth looking forward to.