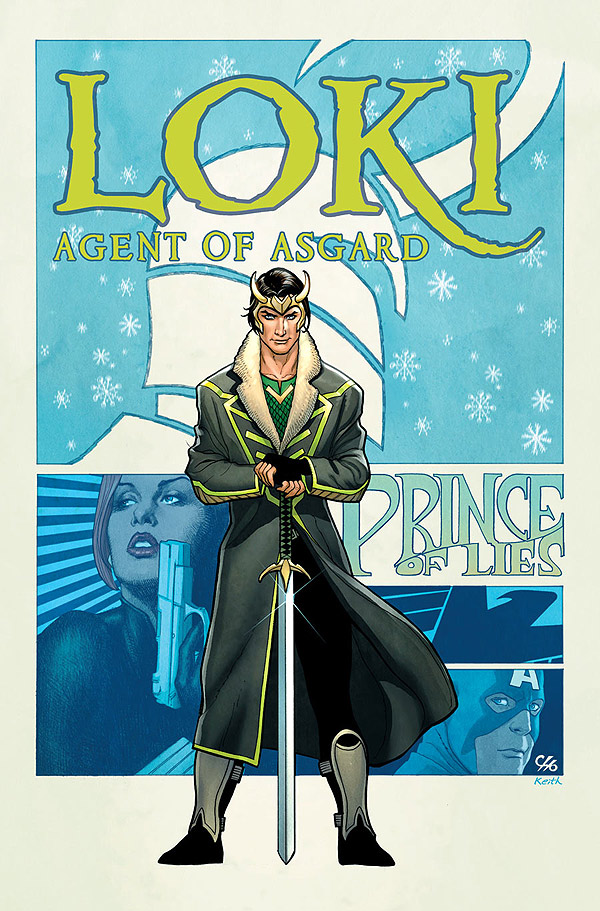 Culture’s continuing obsession with the Norse God of Mischief reaches a new milestone with Al Ewing and Lee Garbett’s “Loki: Agent of Asgard.” 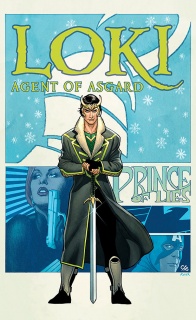 Kid Loki’s all grown up – and the God of Mischief is stronger, smarter, sexier and just plain sneakier than ever before. As Asgardia’s one-man secret service, he’s ready to lie, cheat, steal, bluff and snog his way through the twistiest, turniest and most treacherous missions the All-Mother can throw at him… starting with a heart-stopping heist on Avengers Tower – and the death of Thor! And that’s just the beginning!
Would we lie to you? This is LOKI, true believer – we’re lying to you RIGHT NOW

Well, here I am, back from my self-imposed exile into the mountains after the ending of “Young Avengers.” Meylikhov found me hidden under the frozen wastes a few hours ago and initially couldn’t get me to come out. Why would I? It’s not like there’s any other comics out there that could combine continuity, fan service, and musical references! Much less one that could offer an innovative look at a beloved character. Meylikhov told me that was a weirdly specific complaint, told me to shove it, and got me back to work. As I sat down to my desk (actually a laptop behind the alley of Forbidden Planet) I found a copy of “Loki: Agent of Asgard” and you guys, I think these Al Ewing and Lee Garbett fellas are on to something.

It’d be easy to write this book off as bait in order to attract the swarms of Loki fans on Tumblr (and it kind of is, having several shootouts to the MCU and having Loki in the shower.) That said, the MCU shout-outs are handled in a very subtle way that doesn’t hit one over the head the way other attempts to channel Avengers has. This isn’t a tie-in book for Avengers, it’s definitely all about Loki, anything else is incidental. That’s a great thing too as Ewing proves himself here to have a definite hold on the God of Mischief. I’ve always had a bit of a problem with “Loki as a hero” especially when it came to fans utterly mischaracterizing the Hiddleston version (and I don’t count Kid Loki as Actual Loki), but the Laufeyson here is a cunning trickster who wants to be rid of his past and is an actual character I can get behind. There’s even one scene that gives a small retcon explaining Loki’s behavior that brings forth a whole new view on Loki, expanding on some of the ideas discussed in “Young Avengers” while ultimately remaining true to the character.

Further more, Ewing is just a straight up funny guy, delivering some incredible comedy moments (I won’t spoil the best moment here but Hawkeye’s video game skills are impressive) that set up for some pretty dramatic moments (the last page is a definite cliffhanger.) It’d be one thing to just have these moments in the script but Lee Garbett delivers every line, reaction, and dramatic reveal excellently. Garbett has a talent for comedy in his art that shines through here (as seen in the aftermath of Hulk quoting Mark Ruffalo.) Everything in this issue, Thor’s anger, Hawkeye’s dumbfoundness, and Loki’s… uh… hair.. in the shower are all superbly drawn and capture the sexy/comedic tone of the story, with the occasional breach into some dark territory. The most notable example of this would be the flashback scenes that foreshadow the last page reveal that’ll give anyone who’s kept up with the Kid Loki saga a great moan in despair, and offer an even deeper hook into the series.

If you’re one of the types of people who doesn’t like Loki’s recent recasting as a sexy anti-hero and idol to teenage girls everywhere, “Agent of Asgard” may not be for you. There’s tons of fan baiting that, while I love, could definitely throw off some readers. It’s all handled well and doesn’t really get in the way of the story (though some might get distracted by a panel detailing Loki’s activities on the internet that was seemingly thrown in to get placed on the Saturday Morning Panels feature.) Yeah, it’s openly pandering to Tumblr but only on a surface level. “Loki: Agent of Asgard” is a Loki story, one that seems to be looking to take the God of Mischief to some places he’s never been taken before. If you loved “Young Avengers” or my slashfic “O Brother, Where Arse Thou?” then you’ll love “Agent of Asgard.” If you don’t then I don’t know what’s wrong with you. I spent hours writing “Arse Thou.”

All kidding aside, “Agent of Asgard” is a great reconciliation between the fanon Loki that’s been circulating the internet and the repentant tragic hero we saw at the end of “Young Avengers” to create a unique version of the character that definitely has Ewing and Garbett’s mark on it. Trust ‘Em. This books’ gonna be great.