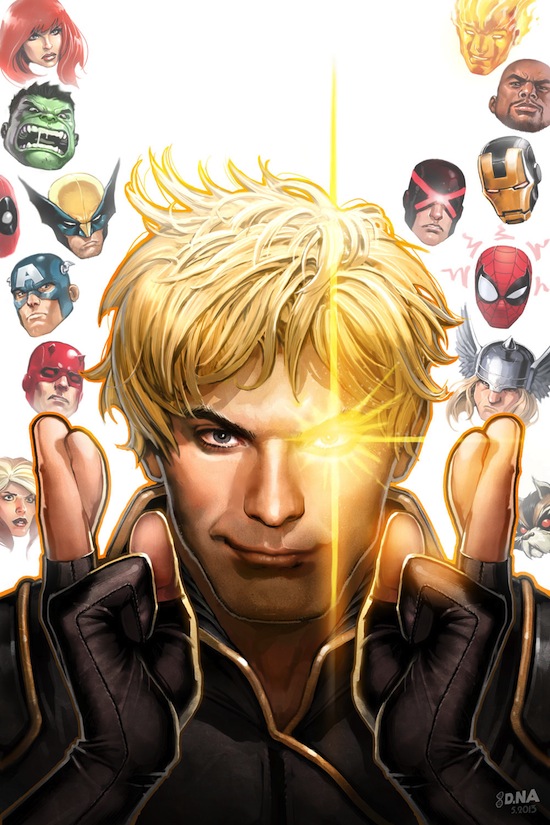 Christopher Hastings and Jacopo Camagni come together for a new series set to make Longshot one of the Marvel Universe’s premiere heroes. Will this effort work? 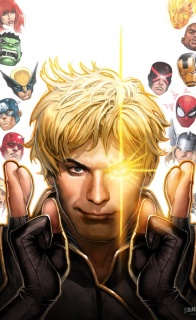 When someone is targeting the lucky for death, it won’t take long before the luckiest X-Man, Longshot, is in the killer’s sights. But things quickly go from bad to worse as super heroes, villains, all of S.H.I.E.L.D. and even COSMIC ENTITIES have it out for our boy!

Is Longshot finally in over his head, or can he beat the odds and save the Marvel Universe when no one else can?

Longshot’s not exactly Marvel’s biggest hero. If anything he’s sort of D-List, but Marvel’s doing more lately to flesh out its minor league characters and so here we are with “Longshot Saves the Marvel Universe” #1. Now, I have never read Peter David’s “X-Factor” and the last time I picked up an X-Men book from the 90’s my skin started to burn as the word “damnation” was whispered from an unknown direction. Thankfully, Christopher Hastings gives a pretty solid infodump explaining the character at the beginning of the book; Longshot is from an alternate universe, he’s hella pretty, and he has the power to manipulate luck except when he does it for bad deeds in which case it’ll backfire on him. Well, alright, since that’s out of the way the rest of this issue should be clear sailing.

Did you guys know Longshot’s power is luck manipulation? Apparently we all forgot because nearly every other page has someone talking about how lucky Longshot is. When nobody’s talking about how lucky Longshot is, the villain, an actually neatly designed mystical guy thing, is killing people who are lucky. Not only that, but Reed Richards and Iron Man luckily found a Macguffin in a museum before any villains did. The phrase “Better luck next time!” gets thrown around, and in this comic’s most shameless, most “this book will be dated a year from now” misstep, it has around three references to Daft Punk’s “Get Lucky.”

Did that last paragraph upset you? Were you unable to think of “Lucky” as a word anymore? It just sounds weird. Lucky. Luck Key. Lukk KEE.

That’s what it’s like to read “Longshot Saves The Marvel Universe.”

When not deconstructing the word Luck, “Longshot” is destroying the concept of linear thought. Christopher Hastings is a funny dude, I’m not going to try and take that away from him; I dressed up as Dr. McNinja for Halloween when I was fourteen. However, he really needs to resist the temptation to throw in jokes where they don’t work. At least, I hope these are meant to be jokes. There’s one professor character whose entire purpose is…

Wait, holy crap, I don’t think he had any bearing on this book at all.

Oh no, wait, I reread it for a third time and he supplied a cosmic ray that made Mr. Fantastic do one thing. OK.

Anyway, Longshot just bursts into his house to save him and his daughter so The Nutty Professor can make jokes. Again, not really jokes so much as references: “I Used to have a bank… turned out it was owned by the Green Goblin!”, “I sold Hank Pym the patent for the technology that lets him talk to ants without resorting to pheromone signals. Nobody’s going to want to talk to the amazing Farting Ant-Man.”

There is a great moment, though how on purpose it was I’m not sure, where Longshot finally sees the antagonist. The Professor’s daughter asks him who Longshot sees and The Nutty Professor says “A god.” Reading that out loud in a terrified Daniel Day-Lewis whisper is the highlight of the book. The other serious dialogue is just as hamfisted with Longshot screaming out “YOU! You must be the one who’s been killing the lucky people” at a guy he’s never met who’s just standing out on the street. I mean, he’s right, so I suppose that makes it a lucky gue– OH FOR FUCK’S SAKE.

Senility isn’t relegated to just The Nutty Professor. Iron Man and Mr. Fantastic guest star in the roles of bumbling morons who need to  deliver the plot device to where it needs to be at the end of the story. Literally, they spend the entire issue driving a truck to Brooklyn containing the issue’s Deus Ex Machina. Of course, they also spend these pages talking about how their lives are going, Tony talks how many times he heard “Get Lucky” at weddings over the summer and, I swear to god, they actually spend roughly an entire page’s worth of comic discussing how best to drive their truck to Brooklyn. Not even in any clever ways, they stop to ask some random construction worker (Is he a construction worker? He’s just wearing an orange vest and holding a magnifying glass. He might be some wandering vagrant?) how to get there and they get actual directions on how to get to the BQE. I don’t know if there’s a point where you live in New York for so long that directions on how to get to places by car become funny, but Hastings hasn’t lived here long enough to actually turn any of that mania into a joke.

He does try valiantly, though. Mysterious Villain Guy spends three panels checking the subway map to see if he needs to take the R line. Maybe all these mundane situations are meant to serve as comic relief, but without any context they’re just words spurted out by characters to expand a two issue miniseries to five.

So what with the words Lucky and Luck being passed around like me after half a sangria, perhaps we should now focus on the unlucky. Namely, Jacopo Camagni whose work here is actually pretty great. His design of characters, from Mysterious Villain to the hipster barbers appearing in the beginning are stellar and his lines are as stylish as Longshot. I think Christopher Hastings said somewhere he was excited to have Camagni on art since he can draw pretty faces, and Hastings was absolutely write; Longshot has a nicely drawn face, as do some other characters (although there’s one panel where The Nutty Professor and his daughter turn into Brock from Pokemon). Unfortunately due to the odd scripting, Cagmani’s art is hurt. Right after calling Mysterious Baddie ” a god,” the Nutty Professor mentions that he left in his cosmic vibration detecting contacts. The transition from godfearing to casual irritance is jarring. Again, this is probably not Cagmani’s fault as much as it is the script, and Cagmagni does a lot of great work in here (especially in terms of body horror with Mr. Fantastic).

Really, Cagmani’s art could probably have salvaged this book if it had a tighter script. The main problem here is how verbose and convoluted the dialogue is, as if Hastings never finished more than one draft. Nearly all of the storytelling comes from characters awkwardly explaining things even though Cagmani is a very capable artist and no one needs to talk about how lucky Longshot is when Longshot’s visual cue is having a light-up eye for his luck powers. The one time Hastings lets his characters stay quiet on the exposition front, there’s no explanation as to what’s going on and I had to reread the sequence a couple of times to actually understand. This script is confusing, not in terms of content but in terms of presentation. Hastings needs to learn to restrain himself, especially from jokes that I’m sure he thought were great but should really have been quietly kept in the drawer, maybe for a scene in which they’ll have context.

It’s a shame that Longshot’s big solo title for this year was not as great as it could have been. This is hardly going to bring the character into any spotlight, at least not a further one than he had with Peter David’s “X-Factor.” Nope, it seems Longshot will be forced to live in obscurity for another few years.

Final Verdict: 3.4 – Skip. Great art brought down by a bloated and confusing script.