Man-Thing has been a delicate property of Marvel’s for decades. Though not as successful as his DC counterpart, Swamp Thing, Man Thing has a cult following mainly due to his run by the incomparable Steve Gerber in the 70’s. Now, Marvel’s pulled in mainstream horror writer R.L. Stine of Goosebumps fame to bring the character back into the spotlight. But can Stine emulate the success of Gerber’s run? 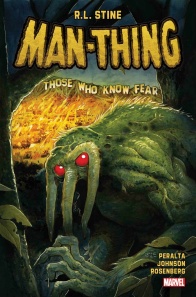 After working for years, MAN-THING has regained his ability to speak and has taken Hollywood by storm…But when an ancient and mysterious danger threatens the swamp, Man-Thing is going to have to choose between his new life and celebrity, and the world he used to call home…

PLUS! A bone-chilling new horror story, written by the master himself, R.L. STINE, and illustrated by the incomparable Daniel Warren Johnson!

This comic completely threw me by surprise. To my current knowledge (and subsequent Wiki search), R.L. Stine has never produced a comic before. He is also not, by social standards, getting any younger. So when I found a disturbingly clever story within the pages of “Man-Thing” #1, I had to do a double take.

Make no mistake – this is no by the book horror book, which is honestly what I was expecting by the writer of Goosebumps. Stine writes the Man-Thing as an avatar of modern fears: someone who is concerned about their public image, someone with aspirations that are too ambitious to realise, and someone afraid of reverting back to their old, horrid past self; quite literally, in the case of this comic. It’s an honest depiction of humanity at its worst, particularly when Man-Thing walks awkwardly through the streets of Hollywood. People don’t regard him as frightening, but as a disgusting, shameful figure, almost as if he were homeless. It’s subtle social commentary that Stine uses to great effect.

Stine uses old school comic narration here, but it doesn’t feel clunky – instead it adds to the satirical nature of the plot. It works especially well at the start of the comic, with the reveal that the Man-Thing is a hopeful actor in a movie of his life. The narration is subtle here, setting the tone rather than describing the plot. Particularly when it describes Man-Thing as being left with the ‘daunting question’ of the studio’s direction. We get a good idea of the eerily humorous nature of the plot through this, without overbearing and obvious foreshadowing.

However, during the recap of Swamp Thing’s origin, it can feel obtrusive and a bit too on-the-nose. A car chase is depicted during the recap, and it falls into the same old trap of narration: telling you what is going on when really the visuals should be speaking for themselves. Additionally, when Stine throws lines at you like ‘EVERY DAY IS THROWBACK THURSDAY TO THE MAN-MONSTER’, you can’t help but cringe.

German Peralta is a great counterpart to Stine in this comic. He uses a loose, expressive style that looks especially beautiful when rendering all the loose tendrils on the Man-Thing’s body. This style adds to the expectedly unsettling tone of the story, especially in the recap sections. However, like Stine, it’s the mundane, everyday sections which act as the most unnerving parts of the comic. From the opening with Mr. Haywood’s office, Peralta decorates the setting with an intricately designed carpet and tacky looking couch. It’s very cold and detached feeling, adding to the tone set by Stine’s scripting that it is humanity that can be truly frightening.

Peralta has a good grasp of sequential storytelling on top of his ability to set tone. He uses both of these talents best in the recap scene, with the Ted Sallis’ transformation into the Man-Thing. As we move from panel to panel, we get some spooky body horror as bits and pieces of Sallis slowly become plant-like and grotesque. At the same time, Sallis’ car is slowly filling with water, adding a sense of claustrophobia to make the reader even more uneasy. The build-up is paid off with a full page spread of the Man-Thing bursting from the car wreckage like some sort of disgusting butterfly emerging from a cocoon. It’s straightforward storytelling, but works really well here.

The facial work in this comic is another subtle addition to the comic that really sets the creepy atmosphere. I strongly believe that someone who can manage to give a character like Man-Thing multiple unique mood expressions is someone who has a good grasp of visual storytelling. Luckily, Peralta is that man. In the faceoff scene at the end of the comic, we’re shown two incarnations of the Man-Thing – one who is decidedly more human with gentle mannerisms, and one more violent and bestial. We’re able to really see a difference in what are essentially the same character just through the way they carry themselves, and that feels like a win for the art department.

Rachelle Rosenberg works on the coloring, and does an incredible job at working with the rest of the creative team. Overall, she uses a muted, swamp-like palette that consists mainly of greens and browns. It’s not exactly a wild new direction for the character, but it does feel like a good modern appropriation of the technique. This comes from the texturing of the shading, which is thick and smudgy, giving the whole book a kind of dirty, used feel almost like newsprint. The opening scene revealing the movie crew is a great example of contrast in her coloring – we have the murky swamp in the middle of the page, and on the outskirts, the too-bright sterility of the studio. Again, it’s a subtle touch, and adds a lot to the unsettling nature of “Man-Thing”.

Final Verdict: 7.6: A surprisingly fun and chilling first issue for the Goosebumps creator, “Man-Thing” #1 is filled with unique scares that’s only held back by dated narration.