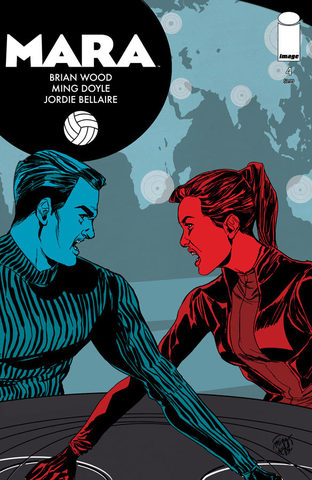 When “Mara” first came out, I honestly had no idea what it was about. I did know it was coming from Brian Wood, Ming Doyle and Jordie Bellaire though, so even if it was about a volleyball superstar in a future where your fame and skills as an athlete are effectively everything developing superpowers and then becoming a weapon for the military, I figured I’d like it.

Wait…that’s exactly what this book is about?

Let’s test that theory then. 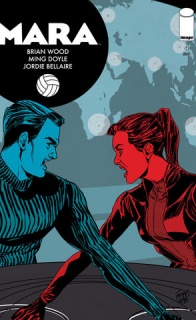 The military is keen to co-opt Mara, now that her abilities are maturing, and they aren’t above using her soldier brother to convince her. They offer to “accept” her again, and she rightly rejects it for the crap that it is. Cut off not only from friends and family, but now from her country, where can she go now? Brian, Ming, and Jordie raise the stakes.

Having a great creative team is important to making a book great, but sometimes great books come out of unknowns or creators you previously didn’t like, and sometimes great creative teams make crappy, uninspired books. It’s the way of life in comics, as there are no guarantees except DC is going to be weird and Brian K. Vaughan is going to be awesome.

Thankfully, unleashing Brian Wood in a world entirely his own with a art team as stellar as Ming Doyle and Jordie Bellaire is about as solid gold Saturday night as you can possibly get. That’s not surprising.

What is surprising is the type of story it is and the way it’s told.

It’s been a story that has consistently evolved from something unexpected to something even more so, as what looked like a look into a future society where uber-athletes were the biggest celebrities and inspirations in the world has quickly become what happens when a person becomes so powerful, the world wants to hide her? But really, all of that is just the context, and it’s about Mara herself as a person.

Mara Prince, like other Wood creations of the past, is a fully realized and wholly unique person. Of course, it helps when you have an artist like Doyle creating what amounts to the evolutionary Wonder Woman, a physical specimen that is the product of a society striving for human perfection. But the story all stems from Mara being a person who has never seen anything less than complete and utter success, and what happens when that success is taken away only to be replaced by a power far greater than anything she had previously imagined. There’s one moment in this story that perfectly encapsulates both the woman and the culture she’s a product of in this issue, as the military tells her what her future is, and all she can share is that she’s just looking for a purpose again. It doesn’t matter what she’s doing, as long as she matters again.

Throughout the issue though, Wood brilliantly laid out that as much as she has accomplished, she’s never really understood who or what she is. By the end thought, when a huge smile invades Mara’s face, she begins to embrace joy and her place more than she ever has.

It’s a coming of age story disguised as a superhero origin story disguised as a look at a previously unimagined future society. It’s all three, and it’s brilliantly rendered by Doyle. Wood very much realizes that he has a gifted storyteller as his artistic partner, and he keeps much of the story to the art. One of my favorite tests for art is whether or not you could look through the comic just at the art and have a good sense for what’s going on, and Doyle excels at just that. In particular, the moments that close the book are exceptionally handled. It feels like freedom, and the emotions of Mara wash over you as you read it thanks to Doyle’s stellar work.

It always helps when you have someone like Jordie Bellaire on colors, of course, as she makes moments like Mara bursting into the atmosphere stand out all the more, with bursts of color and transitions between the layers of space and atmosphere being all the more brilliant with her work.

Overall though, I’ve been thrilled with “Mara” so far. It’s a consistently surprising and excellent book, with stellar character work and imaginative ideas from Wood paired with the artistic magnificence of Doyle and Bellaire pushing this book to higher heights than even I’d hoped for. The promise of greatness was always here, but it always makes me happy when a book reaches its potential. Just like Mara.