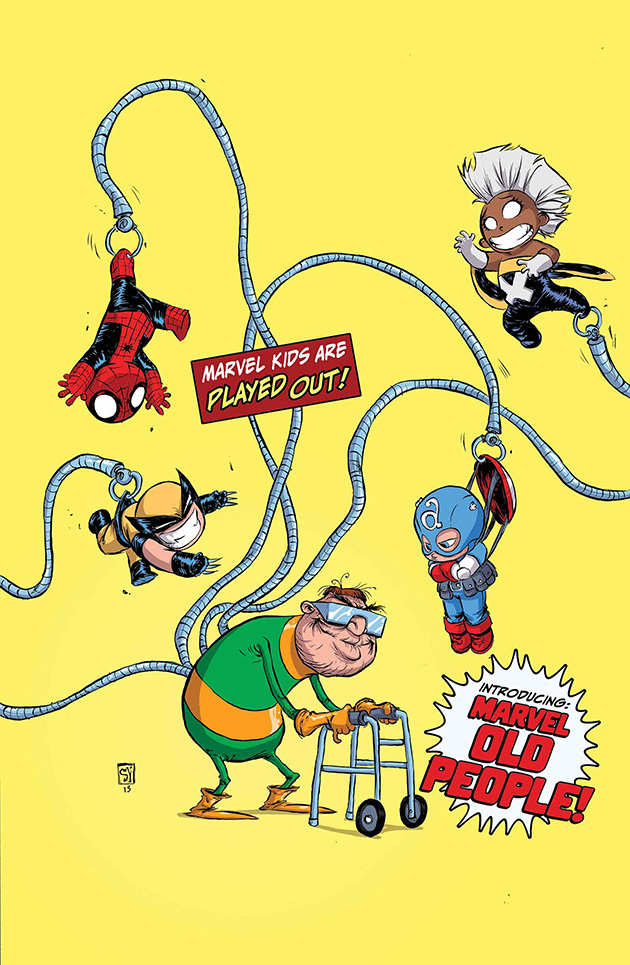 Parody comics are almost unheard of from major publishers, but Marvel gives a valiant effort with its new “Marvel Now What?!” one-shot! Read on for our review to see if Marvel and it’s assortment of guest writers (Some even wrote for TV! TV!!!) and artists can deliver the laughs! 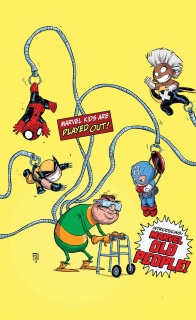 • Get ready for the NOWest book in Marvel NOW History – Marvel NOW WHAT?!
• SEE NOW! Captain America get Cat Fished! SEE NOW! The Intervention of the Watcher! SEE NOW! The Wedding of Thor and Storm!
• All that and more as a cast of comedy’s shining stars and Marvel’s most exciting artists bring you the stories of Marvel NOW that you never thought you’d ever want to see – but you do want to see it, and you want it NOW!

Comedic one-shots like “Marvel Now What?!” are practically unheard of nowadays, what with The Big Two publishers focusing on maintaining a more serious (or at least half-serious) manner. Thankfully, Marvel, in its continuing trend of letting itself breathe a little, released this issue in collaboration with a bunch of talented artists, writers, both from television and comics. Self-parody is an often difficult line to walk. as the self-parodyer will sometimes make minor jokes and refrain from really insulting themselves. Here, in the “Marvel Now What?!” one-shot however, there are no punches held.

The one-shot is bookended by Skottite Young whose completely adorable Marvel Babies who have been responsible for half of the covers produced by Marvel and a quarter of the ones produced by DC and Oni Press. Young’s art is as detailed and precious in interiors as it has been on the covers, and with a mini-story here, Young gets the chance to give his psuedo-creations a voice. Perhaps this might give way to an eventual “Marvel Babies” series which, while an excellent idea would be, as Multiversity Writer David Henderson says, “A Sign of The End of All Things.”

In between Young’s scenes are various vignettes from the guest writers signed on for this project. I mentioned before how no punches are held in this one-shot, and the one brutally pummeling Marvel is Elliott Kalan, comedian and writer for The Daily Show and Colbert Report, who, along with Jacob Chabot on art, does a thorough autopsy of the current Marvel climate. Again, if there’s any real message to be taken from this book it’s that Marvel, even if Marvel does make a ton of mistakes, they’re at least sort of aware of them and owe up to their missteps. Or at least they allowed Elliot Kalan to write two pages about their problems and then charged readers $3.99 to read about how terrible their company is. Wow. It looks like the true joke was on me this whole time.

The rest of the comic is filled with other vignettes in which writers are basically given a page to think of a funny idea and expand upon them with an artist. I’d go into more depth but writing about a joke sort of ruins every purpose imaginable. However there are a few things to be noted. While everyone else wrote a complete script, Elliott and Wyatt Cenac have a recurring segment in the book called “Wy-If” that seems to be a blatant transcript of some conversations Kalan and Cenac had about some heroes before handing that chatlog to Colleen Coover to adapt into a comic. Even though these segments are still chuckle-worthy, it sort of breaks the rhythm of the segments of the other vignettes which are less talking about how silly heroes can be and more actually putting them in the predicaments. That said, Lucas Hazlett’s segment is hands down three of my favorite comic pages created this year, though probably because it was a mash-up of two topics I never knew I wanted to collide before.

Still, even if some segments aren’t entirely the gold standard of comedy, “Marvel Now What?!” is a unique departure from the status quo from Marvel that should definitely be encouraged. Some jokes, like Kalan’s opening segment, may require some more knowledge in Marvel continuity, but it’s overall accessible to anyone with an interest in Marvel. “Marvel Now What?!” isn’t exactly the pinnacle of comedy, but it’s still a very entertaining book created by some talented people, and in a format that will hopefully be utilized again in the future.

Final Verdict: 7.3 – Browse or Buy if you’re really into Marvel/Any of the comedians or artists here.