Last issue, we saw how Adam Brashear dealt with the death of the Watcher in the first of this series’ “Original Sin” tie-ins. This issue sees the start of a decades old secret being unleashed upon Luke Cage as Al Ewing and Greg Land bring us back to good old 1973. 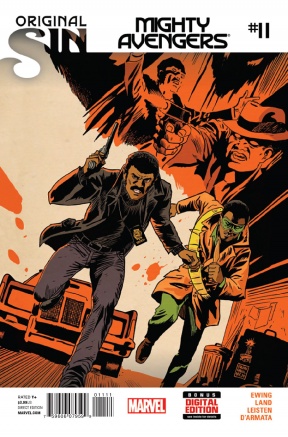 Written by Al Ewing
Illustrated by Greg Land
ORIGINAL SIN tie-in!
• Dr Adam Brashear, super-scientist! James Lucas, cop on the edge! Kaluu, master of black magic! Constance Molina, two-fisted reporter! The Bear, explosives expert and were-woman! Blade, vampire slayer!
• In 1972, they banded together to fight what couldn’t be fought alone – as the Mighty Avengers!
• This issue, Luke Cage confronts his father – to learn the secrets of the Avengers that time forgot!

While shit is, as they say, popping off over in “Original Sin” with the whole world just going nuts over the secrets revealed by the Watcher’s eye, Al Ewing and Greg Land have decided to play things on a more personal level. Last issue was a poignant tale that explore Blue Marvel’s history with the Watcher and even brought back a plot point from Fraction and Allred’s “FF”. This issue we see one hell of a secret uncovered as we are taken back to the 70s, as Luke Cage discovers the secrets of a team-up between his own father and Blade and their first encounter with the Deathwalkers.

Al Ewing is writing what might be the best team book at Marvel right now. Each of the characters of the Mighty Avengers has been specially drafted to create a diverse and unique cast of personalities that play off of each other incredibly well and the stories Ewing tells affect all characters, though usually tied to at least one character personally. Blade’s story so far has dealt with his hunt for the Deathwalkers, and this issue Ewing gives a glimpse at how far back and far wide the hunt goes. This plays well into the idea of an “Original Sin” as this story both explores Blade’s history with the Deathwalkers, but also Luke Cage’s history with his own father. And it also allows for an excellent take on 70s Marvel.

This is perhaps the quiet genius of Al Ewing as “Mighty Avengers” essentially acts as a solo title for each of its characters, many of whom (like Blade) have a history of short-lived series. The book arc welds them together into this one team book, allowing for the team stories to work as each character works great as part of the team overall and gives a look into a corner of the Marvel U no other series does. It also allows for solo stories focusing on each character in turn without the whiplash of switching. This issue has been the best example of this so far as the framing story allows for a personal look into the history of Luke Cage while the flashback story allows for a fun team-up and a personal look into the history of Blade. This series could very well be the sleeper hit of Marvel’s Avengers line.

Until you get to the art. Now, I’m not saying that because of the cover I assumed Francesco Francavilla was illustrating this issue, but I am saying that I’m disappointed that wasn’t the case. But you review the issue you have, not the one you want, alas.

People have talked back and forth over Greg Land’s art far more than anyone reasonably should. Here, I’m happy to say that the artwork isn’t egregiously bad. Sure, there are a number of panels that seem to lack in detail which really kills the mood of the panel, and most characters seem weirdly flat even for two-dimensional characters. But there are also panels like the almost movie poster-esque flashback that introduces the 70s story and the double-page splash of a fight in a morgue with Blade that really show that Greg Land can be a good artist when he wants to be. Overall, the art is a mixed bag and struggles to keep pace with Al Ewing’s layered writing.

Mighty Avengers” has taken the concept of an event tie-in and ran with it, providing one of the best examples of a series taking the boost an event gives it to tell a story that feels relevant to the series without disrupting the flow. Other books could learn a lesson or two from “Mighty Avengers” in how to be a team book. This is largely due to Al Ewing’s expert juggling of stories that focus on the team and stories that focus on individual characters and being able to weave both into singular narratives. Unfortunately, while Al Ewing is punching well above his weight in the writing and proving with each issue that this isn’t just a cashgrab on putting most of Marvel’s non-white Avengers on the one book, the art keeps letting it down. There are sparks here and there of potential where Greg Land really shows that he can be an artist, but for every one of those there are a million panels of the same model smiling modified into different characters.

It’s a shame that such great writing can be brought down by art that could be just as good, but just isn’t quite there.

Final Verdict: 6.9 – A solid start to an event tie-in that could be one of the best, brought down by some mediocre art. This series deserves better. Browse.