“Minimum Wage” is a story of survival against some of the most ubiquitous of life’s numerous obstacles. 15 years after its last run ended, it’s as funny, and true, and bittersweet as ever. Emphasis on the bitter. 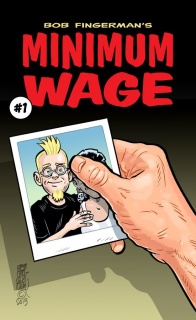 Written and illustrated by Bob Fingerman

Whether it’s the pain from an old wound or literally going back to your childhood hometown, “going home” can be difficult. You can find comfort there, but you can just as easily find things that remind you of bad times. And you can just as easily discover that you can’t recreate the good times you were looking for. Growing older only makes this fact more difficult to grapple with. But grapple Bob Fingerman does, with all of this stuff, over the course of “Minimum Wage” #1. Why, just look at the cover. That says everything that needs to be said about pain and disappointment in one perfect image.

Fingerman navigates these emotional waters even better than he did in the ’90s. “Minimum Wage” #1 has plenty of chuckles in it (mostly due to Rob’s neuroses or the absurdity of his friends and co-workers), and the emotional highs and lows feel natural. Rob is a real person (and probably quite close to Fingerman himself) and so he sees the world in a realistic way. Rob’s struggle to get over his lapsed marriage, his loneliness, and his artistic hump doesn’t ever approach melodrama, because real life rarely approaches melodrama. “Minimum Wage” #1 is so true to life that I can imagine parts of it even hurting a little bit in the reading. I know they did for me. Usually, we take things in stride as best we can. We endure. And though right now he prefers the company of a bouncer rather than his ridiculous friends trying to “score with chicks” and sometimes needs a moment to catch himself in a moment of weakness, Rob endures.

I’m not sure what Fingerman has been doing over the last several years. I like to think that “Minimum Wage” never ended, in his mind. He’s been living and thinking and working this all out to a stunning return. One thing is for sure, his already signature cartooning has improved in nearly every aspect. And the original was already terrific from a visually comedic standpoint to begin with. While the look is certainly recognizable and totally cartoony, the personality in the characters is a little more subtle. There’s a little more detail to the caricatures. In the early dance club sequence, there’s an added cartoonish aspect to the way the characters move through the club and view the people around them. Fingerman makes some very specific visual jokes about the type of people looking for tail in a nightclub and the sorts of people that fall for their pickup lines.

But when it comes time for the introspective moments that have Rob out of sorts, Fingerman visually sells this as a man broken, rather than playing the whole thing for laughs. Life is enough of a tragicomedy without playing these moments up even more. Beyond that, Fingerman’s eye for comedy is more assured than ever. A scene at the porn magazine he draws for has a tremendous visual comic rhythm to it as colleagues bustle in and out of the scene, tossing jokes off here and there. Later when Rob takes a big step into the dating scene, there’s some truly funny encounters played with an equally nice rhythm.

“Minimum Wage” #1 proves that Bob Fingerman is nowhere near short on stories to tell. Rather, it’s proof positive that he’s more willing to be emotionally raw and honest than ever, while never losing sight of the essential comedy of life. It’s early in 2014, but “Minimum Wage” looks like it’s well on its way to being one of the sharpest looks at the human struggle that mainstream comics will produce this year. Not bad for a comic that seeded its roots in the very specific ’90s landscape of Indie Comics. It’s more relevant and personal than ever.

Final Verdict: 9.0 – Buy. How do you put a score on something like this though?