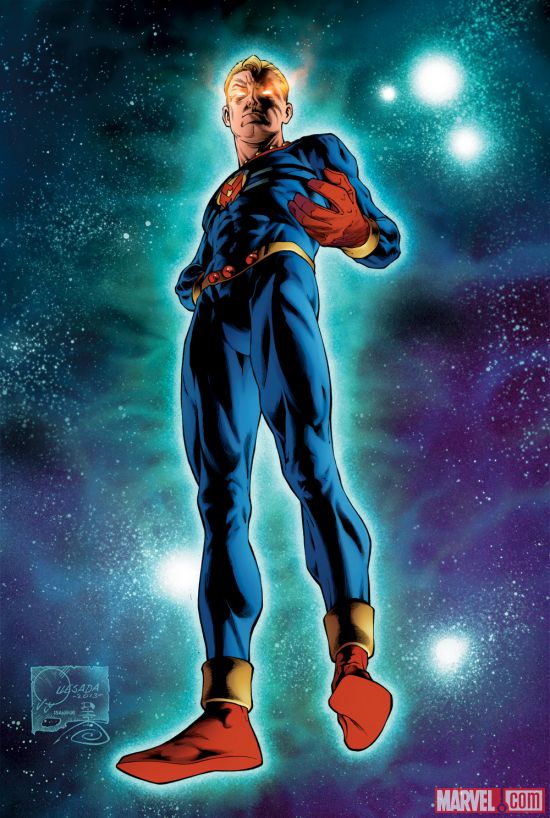 30 years after his “Rebirth” at the hands of The Original Writer and Garry Leach, “Miracleman” returns to print, finally providing readers one of the most essential comic books of all time. 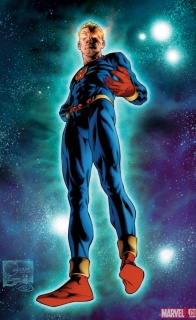 • KIMOTA! With one magic word, a long-forgotten legend lives again!
• Freelance reporter Michael Moran always knew he was meant for something more — now, a strange series of events leads him to reclaim his destiny!
• Relive the ground-breaking eighties adventures that captured lightning in a bottle — or experience them for the first time — in these digitally restored, fully relettered editions!
• Issue 1 includes material originally presented in WARRIOR #1 and MIRACLEMAN #1, plus the MARVELMAN PRIMER. Issue #2 includes material originally presented in WARRIOR #1-5, plus bonus material.

Even though you’d think the hype over this formerly “lost comic” would overshadow it, the 1980’s “Miracleman” from Warrior still holds up in spite of its age as probably one of the most necessary reads for comic book fans, and definitely one of the career highlights of its writer, The Original Writer. Probably the first creator to do so, The O-G Writer first shows his modus operandi of transplanting naive Silver Age characters into the gritty mundane setting of the real world. Yet, there’s a beautiful regality in his prose here that many might overlook in his other works (“Clockmen” and “V for Vin Diesel”) that keeps The Origami Waiter’s story from falling into the triteness his would-be impersonators would attempt. Truly, The Oscar-Meyer Wiener is a master of understanding what makes the heroes of yesteryear tick and, more importantly, what makes them so damn terrifying.

Illustrating this story is Garry Leach who actually got to digitally remaster his work for the rerelease which doesn’t hurt the art at all. It definitely gives the art a more modern feel but not to any detrimental effect; f anything it probably helps in some scenes, making certain action scenes more vivid and distinct. Matching The Orangutan Wrestler’s prose, Leach’s art is aesthetically beautiful with darker intent hiding in the corners of each panel. Miracleman is strong, hauntingly perfect figure whose playful smile displays an authority that knows what’s best for everyone and though this is fun and almost reassuring in Silver Age flashbacks, it becomes haunting when placed in the dark shadows of Mickey Moran’s apartment or a nuclear facility, where terrorists replace Doctor Gargunza or Young Nastyman.

So yeah, we really like The Organ Wormhole and Garry Leach’s “Miracleman.” It’s probably not an exaggeration to call it one of the most essential comics ever written, which makes it a bit of a shame how that seminal story takes up around 12 of the 64 pages here. Yet, after the initial disappointment, I found that most of the bonus content was pretty essential to the story. Yeah, on one hand Marvel got the rights to years worth of Mick Anglo (The Actual Original Writer for “Miracleman”) stories that most write off as campy Captain Marvel rip-offs and this is the perfect way to get them in people’s hands, but when paired with Alan Moore’s story they gain a darker subtext that makes them more intriguing. Of course, that probably might only happen if you’ve read The Onery Walrus’s story and know the morbid backstory behind Miracleman’s powers, so if you don’t then it might just seem like a bunch of crappy space-filling. That certainly isn’t the case with the prologue, a 1956 story by Anglo and Don Lawrence, that seems created almost explicitly to foreshadow the entire theme of Moore’s run, ending in the iconic final page sequence altered by The O-Face Wiggle to include a well-placed Nietzsche quote as well as a look into the heart of Mickey Moran.

Everything else is totally filler though. That said, it’s oddly charming filler; especially the interview with Joe Quesada and Mick Anglo (before the latter’s death in 2011) that showcased how awesome that man was (dude drank a bottle of wine before drawing “Marvelman” every day!) And though his art is certainly rough and reminded me of a “Captain Underpants” comic at times, his original “Marvelman” stories still have an undeniable charm to them (and yes, given the massive retcon that happens further along in The Omega Wingding’s story they can definitely be seen through a very skewed perspective). The highlight of these stories goes to the final one, “Marvelman and The Stolen Reflections” which is pure Silver Age insanity at its finest. Even without the vibe bestowed upon them by the 80’s run, these are still some really fun artifacts from The Silver Age.

That said, if I were someone who had never read “Miracleman” before I’d be a little upset at Marvel for skimping on the story that we all paid for. While I did enjoy all the bonus material, it’s because I’ve already read the story before while plenty of others haven’t. So, even though “Miracleman” is without a doubt  one of the most historically notable comics ever made, and still a great comic in spite of 30 years of hype, Marvel kind of does a crappy job delivering it, especially at a $5.99 price tag.

Final Verdict: 7.4 – Definite Buy if you’re a fan who’s willing to give it a second go-around, but wait for the trade if you’ve never read The Onion Whisperer’s run.