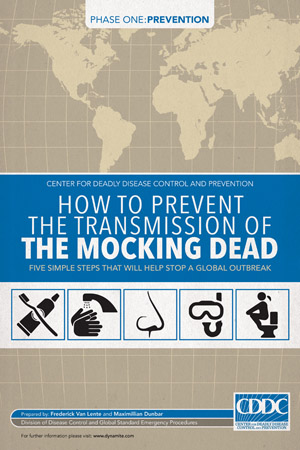 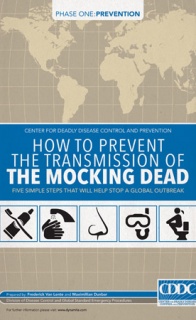 From the New York Times bestselling writer of the Marvel Zombies series comes a gut-splitting (then eating) comedy! A small outbreak can turn into a worldwide apocalypse… but only through a long string of screw-ups. Once actual zombies begin popping up in our world, a lone intelligence analyst realizes real-life events are beginning to mimic the events of a long-lost, Grade-Z, drive-in horror flick. As he races to save humanity with this knowledge, he quickly learns the only thing more dangerous than ravenous walking corpses is the ineptitude of the living!

Okay. The first thing you probably thought of when looking at this title was “parody.” The type of parody that’s less jokes and more of a shallow plot strung together by references to other pop culture items. A parody of The Walking Dead? Yes that’ll sell, that’s a thing the kids like. But now and again, there’s something that comes along that becomes more than a parody and a respected film on its own. Spaceballs comes to mind. Other times, it’s completely derivative drivel. This time however, “The Mocking Dead” isn’t any of these things. Actually, it’s barely a parody. Only tangentially does it connect to The Walking Dead. “The Mocking Dead” is, in fact, a really funny story with an original concept.

Basically, the US government took that “Life imitates art” phrase and made it its own federal agency. Any fictional event that has even the slightest chance of happening in the real world gets its own contingency plan from a team headed up by fanboys. The typical fanboy jokes occur, the protagonist is handy in more than a couple ways, but the jokes are never for the sake of fanboy jokes, they have a genuine context and they’re actually really funny. Though there is the typical zombie apocalypse plot, it’s cleverly subverted through the “Tinseltown” agency.  It’s incredibly original, something the title might not suggest. In fact the title comes from one relatively small sequence and hardly defines the book. If anything, it’s relatively far removed from the supposed inspiration.

What’s not that original, however, would be Max Dunbar’s art. It’s clearly supposed to echo “The Walking Dead” but comes off as more than a little inferior. Some of the faces look weird and the movement is static. It might have served Dunbar best if he had done more to further himself away from the Charlie Aldrad style and distinguished this book as more of its own project. Throughout the book, I was a lot more intrigued by the agency bits of the plot, not the zombies, and homaging Walking Dead only takes me out of this story and start thinking about the other one. Though to be honest, a lot of the book is already distracting. The eyes in one panel made me laugh more than most of the actual jokes.

In fact, this comic would serve itself a whole lot better by being its own miniseries. Well, really that’s what it is. Aside from the aforementioned aesthetic, there’s not much that really signifies this as a parody of Walking Dead. That’s not a detriment; god knows how much more enjoyable an original series is than a parody one. But with a title like “Mocking Dead”, some might skip this one over thinking it’s like Meet the Spartans in comic form. Actually that’s not entirely true, the cover is neat, but the title definitely makes the comic sound much more different than what it really is. Maybe this was done in order to boost sales, but the title does the book a huge disservice by marketing it as something it’s not.

Overall, “The Mocking Dead” is a very meta, pretty funny, and awfully clever comic. Don’t let the title mislead you, it’s really not a parody of The Walking Dead or anything really. If you’re sick of zombies, and justifiably so, this may not be the book for you. In fact, the focus on zombies as the only problem the agency faces really is the book’s weakpoint. A miniseries about nerd agency fighting zombies is alright, but an ongoing about a nerd agency fighting a bunch of fictional threats come to life through contrived circumstances? That honestly sounds like a really appealing book. Until then, “The Mocking Dead” is still fairly enjoyable. If anything, the main incentive to buying it is to get another series building on the Tinseltown Agency concept, but as a book itself “The Mocking Dead” is pretty good.

Final Verdict: 5.9 – Funny, but not anything revolutionary.