What a long, strange trip it has been for this book about a long, strange trip. The first installment was published five years ago (that’s pre-Obama, yo) by Oni, and yet here we are with a new #1 from Image. Having not read the original Oni issue, it took me a few pages (and, in parts, a few readings) to really wrap my head around this issue, but once I did, I was extraordinarily pleased with what I found. 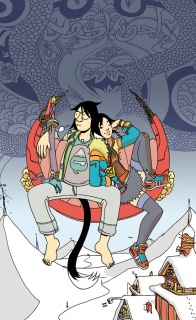 Written and Illustrated by Brandon Graham

Sexica and her Werewolf boyfriend Nikoli travel across a sci-fi, fantasy Russia smoking singing cigarettes. Meanwhile the organ hunter Nura is sent out with a severed head and instructions to find its body.

Not all comics need to be accessible on the first (or even third) read, and “Multiple Warheads: Alphabet to Infinity” might just be one of those books. Visually, the book is a miasma of imagery, text, jokes, and color, while the dialogue is rife with slang (albeit slang for a time/place unfamiliar to anyone but Graham). Reading this is reminiscent of reading A Clockwork Orange or Trainspotting, where half the battle is understanding the dialogue between the main characters. Once the dialogue is cleared up, and the nonsense words start to take on meaning, the book becomes a simultaneously amusing and disturbing travelogue across an alternate Russia.

When starting the book, the reader is dropped squarely into this world, with no context, exposition, or real clues to help clear things up. This forces a closer read, a more nuanced and dedicated look at not just the words and images, but a detailed study of both, both separate and together. What is found after this mining for meaning, is a really funny and comprehensive story. Instead of just saying that the water is sometimes unsafe to drink, Graham throws up a chart of the various types of water that could be found, with options such as “haunted” and “forced immortality.” There is a clear tone here, and yet that tone is quite difficult to sum up. It is both playful and dangerous, and makes for a fun but uncomfortable reading experience.

The alternate-Russian landscape plays a key role here, and allows things to be slightly askew just by its very nature. Soviet nostalgia is a big thing in comics right now, and so having slightly off variations on American/Western slang/products/ideas fits right into that nostalgia. Add in a healthy dose of skepticism/fear of government, and the Russian landscape is a familiar one, but tweaked for obvious sci-fi fun. The locations do manage to truly look Russian, even without any real clear hints given (outside of “The Red City” and a few other landmarks with what appear to be a variation on the classic hammer and sicle symbol).

The book is divided into two stories – one of the werewolf Nikoli and his organ smuggling girlfriend Sexica driving across the land after their home town was destroyed, and the other of a different organ smuggler, Nura, on the hunt for a re-generating creature whose head is in her possession. The Nura story is far more action packed and strange, whereas Sexica and Nikoli’s drive is more playful. Nura’s story does have some humor, however, especially in a scene shown in a “Misogyny Parlor,” where someone claims “I would never let a woman mow my lawn. Unless it was in the kitchen,” which is a sort of perfect off-kilter offensive joke to fit in this story. Nura’s story is where Graham the artist really gets the stretch his legs and draw a lot of weird, quasi-anthropomorphized animals alongside giant palaces and broken down neighborhoods. Of particular artistic beauty is in the “Elysia Imperium” chapter, where Nura is attempting to kidnap her subject. Eastern architecture and mythology, along with snowy, mountainous landscape and urban decay all combine for this setting. Nowhere in the book is the vision of this world more realized than in these pages, and I wish more time was spent in this locale.

But for all the artistic fun in Nura’s story, Sexica’s is where the most joy is found. A vision is painted of a dangerous, but blissful, relationship between our two heroes. Their life seems like a fun place to spend a few hours, and I found myself wishing that the Nura stuff would get over with so I could get back to the road trip. From the “loud” cigarettes that play music to the banal discussion of sweets, the story feels like a real journey of people who love each other and know each other well.

Overall, the book pairs nicely the, if not post-apocalyptic than pretty damn close, world with the beauty and joy that Graham finds in these creatures and landscapes. While at times I felt lost, there was nothing a little deeper reading couldn’t fix, and my reading experience was all the better for it. While I wish I had read the initial Oni chapter, I still feel I got a lot out of this comic, and I’m looking forward to the next installment – hopefully not five years away.