The third anthology series DC is currently publishing (after “DC Universe Presents” and “GI Combat”) launches this week, with a format of #1 issues introducing “classic” characters into the New 52. First up is the former “Kid” Eternity, a character who has had various reboots over the past forty years, with mixed results. 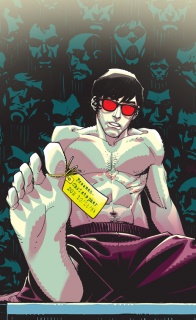 This new origin keeps his 70’s relaunch name, Christopher Freeman (give to him so he could be Freddy “Captain Marvel Jr” Freeman’s brother), as well as a distinctly 70s taste in music (spy that New York Dolls poster on the wall!). But the whole ‘U-Boat crashes and Freeman can bring back any historical figure’ origin is gone. Instead, Freeman was shot and killed alongside his father, but doesn’t succumb to death so easily. Freeman can now bring back the “recently” dead for 24 hours, which helps him solve their murders.

His first case involves a brash, rude man named Darby Quinn and, despite some interference from someone on the “other side” claiming Quinn is “his,” eventually Freeman puts it all together.

That is the story in a nutshell and, sadly, there isn’t even all that much to add. Throw in some daddy issues, a Rosario Dawson-lookalike unrequited love interest, and some “old people don’t get punk rock” humor. Not that this is a bad issue, nor would it be a bad issue of a mini or an ongoing, it isn’t that at all. What is disappointing is that the most interesting part of the old Kid Eternity, the ability to summon historical figures (or, demons who looked like historical figures, depending on which reboot you read), and so instead of a book with elements of hero worship, time travel, and resurrection, instead we get CSI: G-g-g-g-ghost, replete with crotchety chief and lovable character flaw (he’s always late) – YEAH! Freeman is a likable enough character, and I trust that Jeff Lemire would be able to do great things with him, but who wouldn’t want to see Freeman, instead, have to resurrect Benjamin Franklin for a day, or resurrect the late Johnny Thunders, of the aforementioned New York Dolls, to give him a guitar lesson. Instead of creating another guy to be the 6th most important member of Justice League Dark, they could’ve given this “classic” character a high profile chance to reconnect.

Cully Hamner does fine work here, and his layouts, especially on the opening splash page, work really well here. Hamner’s art can be a tad inconsistent sometimes, but here he has done all great stuff. He also apes the trick of using Freeman’s glasses as two-way mirrors, rarely showing his eyes when wearing them, a Lil’ Orphan Annie trick I use myself when I draw. It must also be a bit intimidating to draw Lemire’s work, as he is such an accomplished artist in his own right, but Hamner does admirably here. Although he was the weakest artist on “The Shade,” I do hope Hamner gets some more frequent, non-design work from DC soon.

I suppose my biggest problem with this book is that with this creative team, with this property, with this format, it doesn’t add up to what it should be. There is a nice cliffhanger ending, should DC decide to bring the character back for a second issue and, as I said before, I wouldn’t be too shocked to see Eternity show up in the pages of “Justice League Dark” eventually, but when you get one of the most creative writers in all of comics tackling a weird, fun character like Kid Eternity, with a top notch artist, to launch a new book, expectations must be high. Even though I love the Quantum Leap aspects of the book, it just doesn’t do too much for me. I would give it another shot, but honestly, if we can’t get Joan of Arc to help with our French homework, is it even worth it?

Final Verdict: 5.5 – Browse (and support Lemire by picking up “The Underwater Welder” this week – right, Walt?)