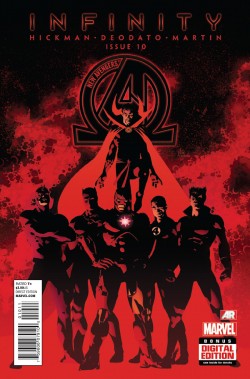 Hickman and Deodato continue to take the Illuminati through Infinity and through this explore the origins of the Inhumans. Read below for our full review! 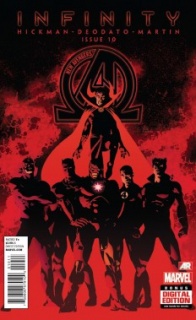 • Inhuman secrets reveal the desires of Thanos.
• The machinations of Maximus the Mad.
• The battle for Earth continues…what an awful time for an incursion.

“Is this Rocky?” my friend asked, flipping through my copy of “New Avengers” #10 while I was nonchalantly putting up my Infinity poster in my room. Just so you know there’s no bias in this review.

“No no no. That’s Rocky from Rocky and Bullwinkle” she declared, pointing out Black Bolt’s squirrel teeth.

And she was right. Mike Deodato absolutely drew Black Bolt’s teeth in certain panels like the cartoon squirrel from the 50’s. Or at least, he’d drawn Black Bolt’s face, as well as some of the other faces in this book, in a kind of disconcerting manner. Mostly the (in)human faces, Thanos and the Black Order look fantastic here as do the backgrounds and scenery. The cover, also by Deodato, is by far one of the best covers he’s drawn too, with fantastic use of black and red infused with Kirby Krackles, reflective a series much darker than its other Infinity brethren but not afraid to show off its cosmic influences and the use of panel layout on a certain page is just plain cool. So, even though some of Deodato’s art is a little distracting, when you get past the occasional odd choice in facial design, “New Avengers” #10 shows itself as another great chapter in what is quickly becoming my ideal event comic.

Now that we’re a month or so in(human), Infinity is starting to finally expose its own patterns and as such, “New Avengers” is all about The Illuminati dealing with the repercussions of Black Bolt’s confession at the end of “Infinity” #2. Just a quick point here, “New Avengers” #10 takes place before “Infinity” #3 so it is an excellent idea to read the former before the latter. That seems like an easy task, but since Marvel seems intent on insisting Infinity consists of just the main series and not Avengers and New Avengers (because they are dirty damn liars) these titles do not get marked as chapters in the Infinity story. So just check Hickman’s nifty graph published in the back of every one of his Marvel comics, as well as next week’s East of West surprisingly, to see what order you should read the issues in.

Anyway, relegating the story of “The Thanos Seed” (another aspect of the book my friend tried to make a joke about before I told her that was actually what the issue was about)  allows Infinity a lot of room to breathe. Even though I might have sounded a little ambivalent about both Avengers titles being essential to Infinity, the story really could not work any other way. There is just so much going on here that trying to fit it into the main series would be chaotic. Remember how much stuff happened in just the main Infinity series? That doesn’t even deal with the incursions, Thanos’s wild seed, or Namor who is once again the best part of anything he’s in. Even though he is responsible for the most bastardly action in a whole series about a team whose name is literally “The Illuminati,” he still manages to be one of the most right corrects in the whole thing.

There’s still a bit of suddenness in terms of the plot. That whole search for the The Thanos Seed, which is the grossest term I have used to circumvent spoilers as of yet, gets wrapped up pretty anticlimactically. It comes with a huge expansion of the Inhuman mythos, and with the influence of one of Thanos’s wonderfully stupidly named lieutenants, but that subplot that was huge enough to be a final page in the main book seems to become pretty insignificant here. The Thanos Seed is just kind of at a place. Now, the discovery of the Seed is going to lead to some interesting developments, but here it’s just “Ah YES! Found the thing!” Granted, there’s roughly a dozen plotlines going on in Infinity and at least three of them involve the fall of a hundred cosmic empires or the collision of multiple Earths, but a huge point in the main series gets thrown to the wayside. If Marvel does the wrong thing and packages Infinity as three separate books for Avengers, New Avengers, and Infinity Prime, then it is going to be one disconcerting read.

Even though this issue does have its faults there are very few of them to be honest; aside from what I said about the seemingly anticlimactic Thanos Seed story and Rockygon Boltagon there’s not many huge flaws here. “New Avengers” #10 continues to delivery what the rest of Infinity already has: an event comic that truly delivers on the promise of being called an “event.” There is stuff going on here that seems highly likely to actually cause a change in the Marvel Universe in a meaningful way. That may seem a little cynical, Marvel’s definitely been shaking up their status quo in recent years, but usually as the footnote of a not-great story (AvX and Age of Ultron come to mind.) Here though, we’re getting an amazing story that simply could not be told in a normal series. Infinity, and its tie-ins, are a genuine event and one you should be heavily invested in(human.)

Review Score: 8.7 – BUY! But make sure you’re caught up with Hickmanian Avengers lore.