As part of the .NOW initiative, “New Avengers” #16.NOW is marketed as a fresh jumping on point, but new readers are in for something else entirely. Read our review below! 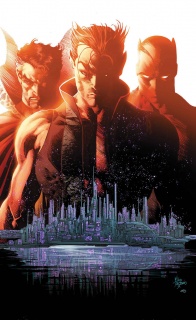 “THE NIGHT BEFORE THE WORLD ENDED”
No more bloodshed. To save their nations, the proud Black Panther and the arrogant Namor have sued for peace. As members of the Illuminati, the secret organization made up of the Marvel Universe’s most powerful heroes, they must work together to stop the extinction of the entire universe! But are their amends too little too late? There’s no turning back for the Illuminati after this issue – and they’ll pay the price for their sins.

Just to get this out of the way, it should be made abundantly clear that “New Avengers” #16.NOW is defiantly not a jumping-on point. This is made abundantly clear by the content of the issue which, solicitation information aside, is about a faux-Justice League from a parallel Earth being observed by a grumpy Black Panther and a sassy Namor. Are those things anyone could get behind? If we’re talking about the last part, then yes. Still, “New Avengers” #16 probably isn’t a great jumping on point. Not because Hickman’s writing is incredibly dense and confusing at times, but because “New Avengers” belongs to a gigantic mythology that must be experienced from the beginning.

Also, it’s dense and confusing at times. Hickman’s Avenger Mega Series can get pretty confusing at times (the other week’s “New Avengers” #15 genuinely just went past my head for most of it). Still, when the occasional issue like #16 comes along and gives us a time to reflect on the incursion dilemma(as has been the case for a few issues now that we’ve found The Bridge from “Fantastic Four”). This issue sees the introduction of a new alternate reality that’s not even trying to hide the fact it’s a pastiche of the Justice League (the guy in a darkly colored knight costume named Wayne? Yeah.) In two pages of great previews into other dimensions provided by Rags Morales we get a look at how they came to be. It’s an origin that doesn’t make sense considering Hickman just throws a bunch of words together until they form a sentence by the barest definition of the English language, but that hardly matters. They’re an alternate Justice League, they’re here, get used to it.

Even though it seems trite to just throw in a parody of the Justice League, they do definitely serve a greater purpose. The Illuminati have definitely been one of the most morally ambiguous superhero teams in recent memory, and The Great Society (the new name for The Distinguished Competition) offers several stark contrasts to our supposed heroes. The deathly nihilism that’s polluted The Illuminati since the very first issue is finally shown to not be The Only Way™. Considering how seemingly unstoppable The Illuminati  have been, and how effective The Great Society seem to be at saving the multiverse, it’s an interesting new dynamic for the series, one underlined by a number of humorous moments between Panther and Namor.

Hats off to Namor for delivering said comedic moments in an issue that, even though it’s focusing on an entirely different, fundamentally optimistic team, still feels too dark, too claustrophobic. Still, that might work to the comic’s benefit. Even when we’re dealing with a Great Society that actually has the potential to save us all, it’s all viewed through the perspective of those who’ve been choked by death. The look into the multiverse is visually interesting too, offering a wide array of parallel worlds being utterly destroyed by past enemies from the series. Though I’m not entirely sure I understand exactly what’s been going on the alternate Earths, I can’t say I didn’t have a good time viewing them. And when The Great Society has an ultimate battle against the forces that would destroy their world? Honestly the most visually stimulating battle scene to grace the pages of “New Avengers.” Considering that I haven’t been a huge fan of Morales’ work elsewhere, “New Avengers” #16 was a huge surprise when it came to the art.

Though really, I feel like surprises are all “New Avengers” is surviving on. Without the bold new direction offered by The Great Society, I might consider dropping “New Avengers.” It’s the type of series that really takes its time, slowly drowning the ready in a heavy wave of information. Sure, when it’s all over and you’ve broken through the wave you can reflect on it as a great time. But inside? It’s a terrifyingly confusing ride that makes you think you’re missing a lot. Do I enjoy “New Avengers?” I definitely think I do, but a lot of that comes from the faith that it’ll all make sense and become a truly satisfying story in the end. If you’re the type of reader who needs instant gratification though, this might not be the book for you.