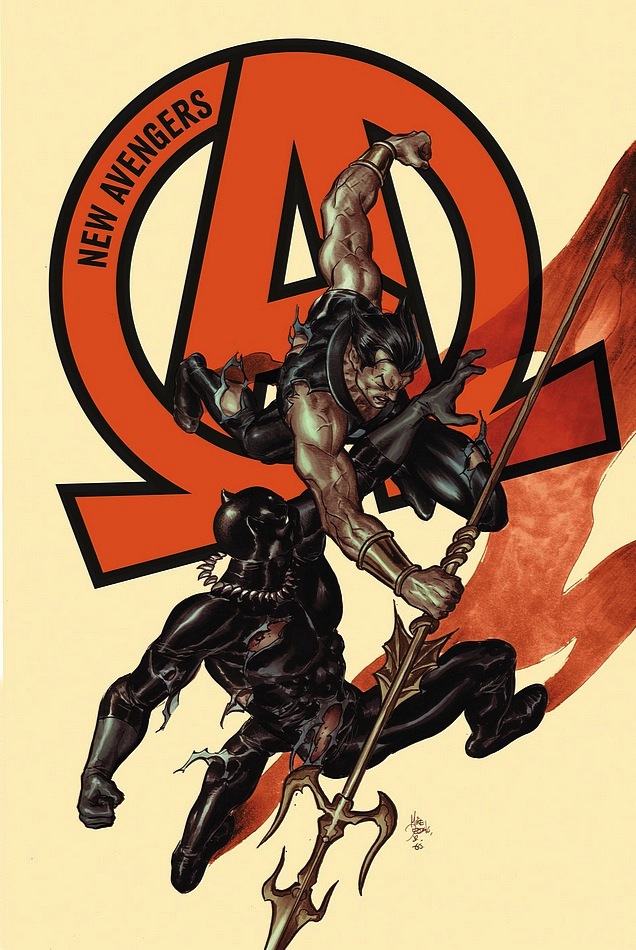 Hickman takes a break from destroying to planets to destroy the Illuminati’s inner workings in this issue of “New Avengers!” Read our review after the cut! Mild spoilers ahead!

“WHY NOT WAR?”
• The cold war between Atlantis and Wakanda heats up.
• Who is the secret member of the Illuminati that many of the members do not know about?
• How does Black Bolt lie?

If Jonathan Hickman were to be defined by one trait, it’d be his unstoppable array of crazy ideas. Unfortunately, as some of the recent issues of his Avengers/New Avengers run has shown, his ideas can just get a little too out there. Not that he should stem his ideas, he should, for the love of everyone, keep pushing them out. It’s just that a respite to actually explain what all these Systems are or why half the cast is now speaking in Babylonian. Unfortunately, this issue does not explain everything (which is probably for the best as Hickman is a master in the long con and will probably let all his mysteries unfold over many, many issues) but just those bits of continuity errors that may have irked some readers finally come into light. Why is Reed Richards on Earth when he’s supposed to be on Matt Fraction’s multiversal family road trip in his own title? When will Beast get into his new form? Will Black Panther and Namor finally diffuse all their tension with tender kissing? All of these questions are answered!
Of course, Hickman still does a bad job handling continuity in some ways. The exact details of how Wakanda works politically are just a little sketchy as Black Panther is not the king of the country but is king of the dead because the tail-end of Hickman’s Fantastic Four run went into some weird places. Hickman’s, as far as I can tell, the only Marvel writer right now who doesn’t have a traditionally written recap page (he just does a “Previously On…”) which is admirable and fits in incredibly well with his style, but just a bit more exposition bombs on how some stuff in “New Avengers” works would be greatly appreciated.

Beyond the ideas and concepts, Hickman also does a great job in showing how dire the Illuminati’s situation is, although this issue takes a slight downbeat in terms of stakes. That’s not to say the plot slows down at all. Wakanda and Atlantis begin the opening strikes of a full-on war between Marvel’s most powerful fictional nations. This is what “New Avengers” calls “low stakes.” Granted, the preceding issues of the series have been all about the Incursion events and, as interesting as they are, it’s good to see an issue that doesn’t revolve around just that. Hickman’s always been great at writing characters who have a lot of power so having the Illuminati’s two monarchs yell at each other for a couple of pages is just great to read. What’s even greater is this book’s third monarch who is another Hickman favorite. If the solicitations are to be believed and there is a secret Illuminati member, this character is the absolute best choice to join the Illuminati and was slightly foreshadowed all the way back in “Dark Reign: Fantastic Four.”

Mike Deodato meanwhile, does excellent work on this title. His down-to-earth realistic style helps show off the New Avengers as not just superheroes but as men and that helps bring in to focus the gigantic decisions each member must make. This issue is a little slow on the action, which doesn’t detract from Deodato’s work since his calmer style works when the whole issue is essentially just people talking with a couple panels of violence thrown in for good measure. Most artists take a bit of a spotlight when the action in a comic slows down, but Deodato never seems to let his quality drop. Unfortunately, the slow action does mean that there aren’t really any huge moments for Deodato to wow the audience with, but he still does an excellent job. Plus, his rendition of the aforementioned third monarch of “New Avengers” matches perfectly with Hickman’s spot-on writing for said character.

Overall, “New Avengers” #7 works well in setting up the future events of the series while still rocketing up the stakes. Hickman uses some breathing room, which doesn’t slow down Deodato, and is thus able to clear things up for the audience while still delivering a very exciting title. There’s still a few kinks here and there (If Reed is able to come back to Earth, why hasn’t he turned around and seen all the chaos happening in “FF”?) but overall the focus for where “New Avengers” may go in the forthcoming issues is as exciting as all of Hickman’s ideas.