It’s hard to get mad at DC for trying to keep its living legends happy. Guys like Neal Adams, Marv Wolfman, George Perez, and Len Wein continue to do work for the company they helped build, and for their part, DC tries to throw them a bone here and there, usually in the form of a miniseries, for them to work on a pet project. Adams had “Batman: Odyssey,” Wein is penning “Before Watchmen: The Curse of the Crimson Corsair,” and currently, Wolfman is writing “Night Force,” the third iteration of his horror/mystery series.

The previously announced six issue series has been expanded to seven issues, and this fourth issue feels a lot like editorial adding an issue to give the readers a clue as to what the hell is going on here. 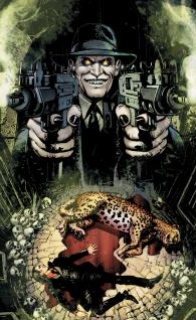 – Don’t miss this turning point in the epic miniseries!
– THE BARON time-travels straight into a trap!
– The final fate of DONOVAN CAINE revealed!
– NIGHT FORCE now will run seven issues!

A lot of this issue is circling back to things hinted at or flat out shown to us in prior issues, with the intent of clarifying what exactly is going on here. That isn’t a good thing; by the fourth issue, any potential readers have jumped ship, and anyone who is still reading four issues in probably could piece together most of this on their own, either from paying close attention, or from being a fan of the prior runs. Wolfman is writing to an audience here that is either going to be bored by this issue or not reading it at all.

The concept of the series is relatively straightforward: Baron Winters recruits various people to be a part of his, you guessed it, Night Force, to solve various supernatural problems. This is a straightforward concept that is never really spelled out for the reader in four issues, but rather pieced together from reading 80 pages of story. Even in this exposition heavy issue, there really isn’t anything to suggest that Winters has an agenda, a method to his madness, or anything besides a tiger that talks to him.

Tom Mandrake does a nice job drawing a creepy comic, with the requisite shadows, menacing grins, and creepy creatures you’d expect. Unfortunately, this series was originally drawn by Gene Colan, and Mandrake, while a great artist, is no Colan. Where Mandrake does his best work is in adding menace, through body language, angles and shadows, to seemingly mundane scenes. These come off as almost creepier than some of the scenes that are supposed to be scary; his inking, in particular, works very well here.

But Mandrake can’t make this comic something its not, and that is something that is particularly interesting. So many of the scenes in this issue (and the series in general) are standard fare, not even tweaked all that much. The scene of Jim and Zoe watching Jim’s dad getting killed is lifted nearly completely from 12 Monkeys, without the pathos. There is something fun about a mythic mansion with passageways or a dungeon, but there is nothing to suggest that these weren’t copied straight out of Horror Comics 101 – there isn’t anything distinctive, in look or description, to make the locales stand out.

The characters are just as cookie-cutter, unfortunately. Jim is the good cop, nearing retirement. Zoe is the amnesiac damsel in distress. Winters is the enigmatic puppeteer. It’s just too cute, too familiar, and too dull to really pull me in.

But hey, if this means we’ll get another New Teen Titans OGN, I’ll buy an issue of “Night Force Vol. 2” next year for sure!