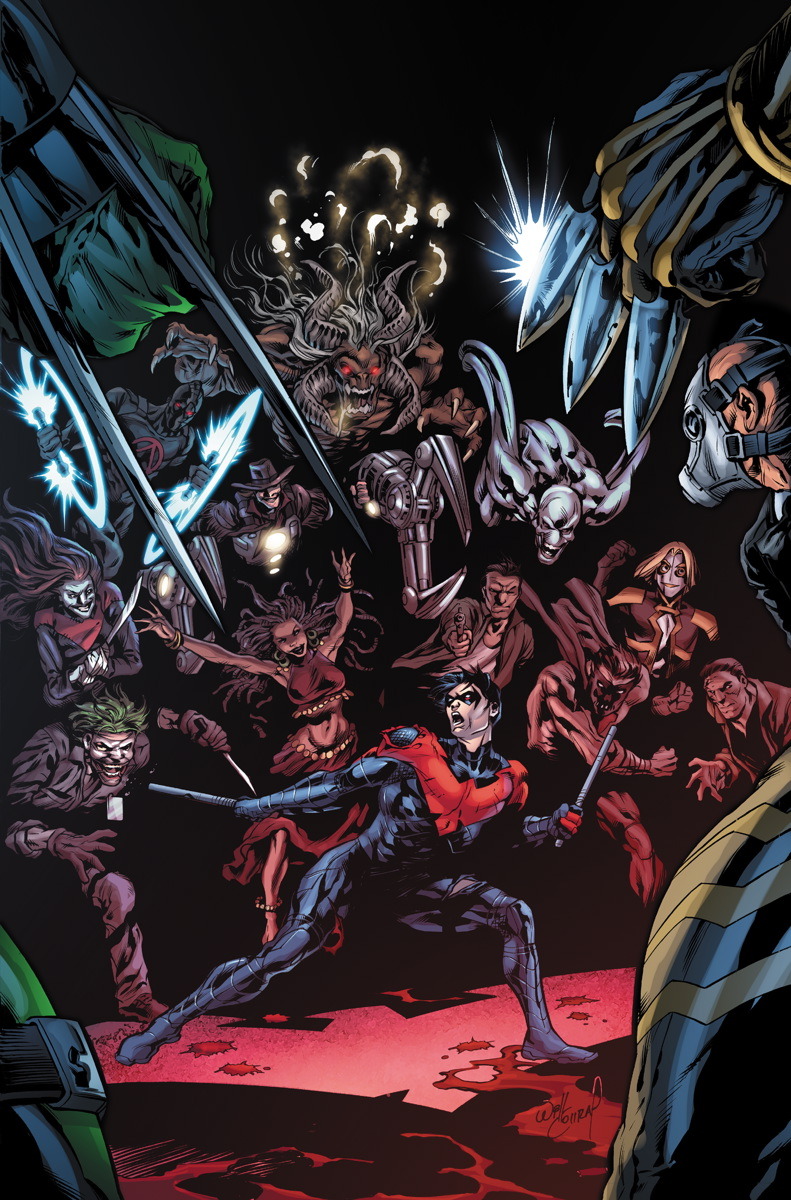 It’s the end of an era for both Dick Grayson and long time scribe Kyle Higgins, in the emotionally satisfying “Nightwing” #29. 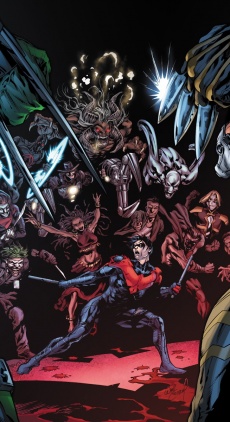 With Nightwing questioning his purpose, will he be able to stop Mr. Zsasz’s relentless rampage through Chicago? Don’t miss this epic story that ties into the events of FOREVER EVIL!

Time is finally about to catch up to Dick Grayson, as the last issue of “Forever Evil” is about to ship to comic book stores and the rest of the DCU arrives at the moment when the Crime Syndicate traversed universes. Soon Nightwing will be captured, beaten to a pulp, and have his masked ripped off to reveal the face of Richard Grayson to the world. Everything is about to change for the character, and for the creative team behind him. “Nightwing” #29 gives the hero one last chance to leap across the rooftops of Chicago, to enjoy this new life he created, and to help someone like himself.

Kyle Higgins as been writing “Nightwing” since the start of the New 52, a span of time only matched by Geoff Johns on “Justice League”, Brian Azzarello on “Wonder Woman”, and Scott Snyder on “Batman”. This sheer number of issues have allowed Higgins to take the character on a long journey into adulthood and independence. After a dozen issues of Nightwing reacting to things happening in other books, the move to Chicago was a wise choice that gave the character room to breath and grow. The reason that this arc was successful is that Higgins always stayed true to core of the character, and issue #29 serves a poignant reminder of that fact.

The fact that Dick Grayson is trying to help out a young girl in a situation that mirror’s his own, murdered parents, could seem especially on the nose, but Higgins makes it successful by keeping the story simple. This issue is not two-dozen pages of Dick Grayson having blood filled flashbacks as he takes out his rage by tearing bad guys apart. Nightwing sees somebody in trouble, and he has to help. He has evolved to the point where he is confident in his own abilities, and it never reads as a true life or death situation, but instead like he has everything under control. With Higgins at the helm, Nightwing has learned from his past, and has actually taken the initiative to carve out his own tiny piece of the DCU.

In contrast to the writing, the art side of “Nightwing” has seen a revolving door of talent, and Russell Dauterman only joined the series in the previous issue. In contrast to the realistic illustration of Brett Booth and Will Conrad, Dauterman is a more stylized cartoon-y art. It actually is a good fit for Nightwing, a character who has often used humor and general cheeriness as a contrast to his ever-brooding mentor. Dauterman’s art is fun and energetic, and keeps tone light. The villain of piece, Victor Zsasz, is product of the grim and gritty 90’s and frequently shows up when a good old fashioned psychopath is needed. Dauterman manages to keep the character menacing, but not excessively graphic.

One of the only major problems with the issue’s art is the actual character design of Dick Grayson himself. To put it simply, he has a serious case of One Direction hair going on. You know how everybody chooses to believe that a pair of glasses makes Clark Kent look completely different from Superman? With this hair it would take about a day for the whole world to figure out that Dick Grayson is Nightwing, but perhaps the coming events of “Forever Evil” makes it a moot point. When he’s in costume, the design peculiars don’t stand out, but without the mask Grayson looks about 8 years younger than he should.

Given the fact that this is possibly that last time Kyle Higgins will write “Nightwing”, it would have been very tempting to go for the huge, bombastic, explosive ending, but the author was wise to avoid this. The Higgins’ run on “Nightwing” was easy to overlook, but it always stayed true to the character, and never sacrificed Dick Grayson’s ideals and integrity for gimmicks and grimness. It’s a shame that there wasn’t the opportunity for an artist to stay on the series for a sustained amount of time, but Dauterman does an admiral job stepping to the series for this two issue arc, outlandish hair choices aside. The character shattering identity reveal is just around the corner, so the smaller, more personal finale is very fitting. The choice for Nightwing to touch on his past to impart wisdom on another young innocent is a simple and elegant way to mark the end of this era.