Dick Grayson and Barbara Gordon share one last night together as they face a fire-obsessed villain and their own uncertain futures. 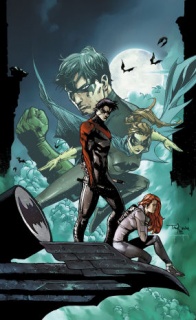 Robin and Batgirl grew up fighting side by side…but with Dick Grayson about to embark on a new crimefighting quest and Barbara Gordon no longer fighting under the Bat, is there anything left between them? Following the “Batgirl: Wanted” epic, this is the story of a twosome with nothing left to lose, fighting for the only thing they can: each other!

In another universe, Dick Grayson and Barbara Gordon had a long history together, one that was marked by teenage hormones and Batman-related interference. Ever since the New 52 reboot, their relationship has become part of the ill-defined five-year period from when the Justice League first formed to the present day. They’ve both been involved with other people in the meantime, with their own rarely acknowledge past keeping an undercurrent of tension between them. In the Bat-verse, romance is a rarity, as all of Bruce’s loves either die or swear never-ending vengeance on him and as result, Dick and Barbara have the potential to be the Clark and Lois of Gotham City. The relationship between the two has long been an important part of their back story, and is the main focus of “Nightwing Annual” #1.

The issue opens with Barbara helping Dick pack up his loft on the eve of his permanent move to Chicago, as Dick finds a picture from their younger days together. Their momentary nostalgia is broken when the Bat-signal appears in the sky, and Dick mentions that Bruce is out of town (one of the few mentions that Batman sometimes leaves Gotham) and it’s up to them to answer. As Batgirl is persona non grata with the Gotham PD, Nightwing meets up with Detective Bullock who informs them that famous actress Cindy Cooke is being stalked by a fire-obsessed villain, who’s already blown up her talent agency and killed her ex-boyfriend. Dick and Barbara team up to track down the bad guys and protect Cindy, while at the same time dealing with how Nightwing’s imminent depature for the Windy City will affect their relationship.

“Nightwing Annual” #1 is written by regular “Nightwing” scribe Kyle Higgins, who is well equipped to take a dive into Dick and Barbara’s past. After spending the first 17-odd issues of “Nightwing” mostly reacting to events in other books, Higgins has relished the opportunity to explore the character as a solo act, without the constant shadow of Batman, during Dick’s recent Chicago adventure, and he applies this same tactic to this issue. Batman is not featured and barely mentioned, and he doesn’t have to be for the reader to feel the weight of his presence. Instead, Higgins focuses on what Dick and Barbara mean to each other, and what it has done to define themselves, not on how the larger impact of Batman’s two protégés peeling off each other’s armor (winkwink) has affected life inside the Bat-cave.

This issue is a long one, finishing off at 40 pages, but Higgins keeps the story moving at a very brisk pace, and it never feels like it lags. This is partly due to Higgins’ sharp use of dialogue, as Dick and Barbara have a lighter touch when compared to their mentor, which also serves to further emphasize the connection between the two, who routinely finish each other’s sentences. It’s not all lightness and banter, as the issue is bookended by scenes dealing with the characters’ relationship drama, and Higgins even works in a parallel relationship between Cooke and her would-be assailant. It almost seems odd to see Dick and Barbara discuss their relationship with such candor, both of these characters have been through trying personal events recently, even by Gotham standards, and now they feel like two appropriately weary warriors who have outgrown teenage games.

Although Jason Masters was the sole solicited artist on “Nightwing Annual” #1, but the book credits Daniel Sampere & Vicente Cifuentes in a manner that suggest back-up type work. The book, however, is free of any backups or dramatic art shifts, so it’s hard to say who drew which pages. Regardless of who was the penciler on every page, the art is fairly impressive throughout the issue. Starting out of costume in his apartment, Dick is clearly the resident beefcake of the DCU, and should get his own calendar someday. The extended issue length allows for more time with the characters without their masks on, and these scenes are nicely rendered and the emotions conveyed by their faces adds a lot to the story. The only drawback is that at a couple points when the image pulls further away, the line-heavy style makes them seem a little blurry.

Once the Bat-symbol appears and the action starts, the book keeps pace the story perfectly. The main villain of the issue is Firefly, a fire-obsessed baddie who can also, you guessed it, fly. There are several scenes in which Firefly sets rooms and buildings ablaze, all vividly rendered. When Firefly fights with Nightwing and Batgirl, the flames take more focused and even deadlier appearance. It actually looks quite scary, and makes one wonder where Mr Freeze is when you need him. It should also be noted that even with fire fights opening in the foreground, the backgrounds throughout the issue are fairly detailed, and never look rushed or unfinished.

“Nightwing Annual” #1 is another solid issue from Kyle Higgins. He has a firm grasp of the character, and makes the relationship between him and Barbara reflect current emotionally raw states. The story itself is entirely self-contained, and proves that Higgins can handled one-and-done stories as well as long arcs. The art from Jason Master with Daniel Sampere & Vicente Cifuentes is impressive, and the flame wielding Firefly looks like a real credible villain, not just some dashed off bad guy. Perhaps this issue’s greatest success is that it tells a story about the relationship with the Bat-family’s two most famous members without having to address how they relate to Batman himself. It’s not his story, it’s theirs.

On a quick final note, the issue is marketed as tie-in to the recent ‘Batgirl: Wanted’ storyline, but in actuality has next to nothing to do with it, and only comes up when Barbara dons a costume other than her traditional Batgirl cowl.

Final Verdict: 8.0 – Buy if you’re a Bat-family fan, or just looking for a solid one-and-done story with a couple of DC’s underrated characters. But if you’re looking solely for any ‘Batgirl: Wanted’ wrap up, there isn’t any to be found.