I’ll admit right off the bat that I was one of those people who always used to talk about how great Marvel Cosmic was and how amazing Dan Abnett and Andy Lanning’s work was. That said? “Nova” didn’t ever do much for me. At least, not in comparison with the other major space cop book that rivaled it. So I was quite looking forward to seeing what might come from the new “Nova” title, with it’s new titular hero and new (perhaps even controversial?) creative team.

The results of this reading experiment may surprise you. 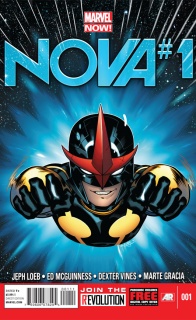 The Human Rocket returns!
You’ve followed him through the history making (and changing!) AvX and now the mystery of the all-new Nova are revealed in this breathtaking new ongoing by the best-selling, award winning team of Jeph Loeb and Ed McGuinness (RED HULK, Avengers X-Sanction).
Sam Alexander is a kid bound by the gravity of a small town and a father whose ridiculous, drunken fairy tales about a “Nova Corps” were just another heavy burden in a life full of them. But luckily for Sam Alexander…soon gravity won’t even matter. And those troubles? It’s like they’re a billion miles away.

Lets all be open and up-front about something: the last time Loeb and McGuinness had a major collaboration, it didn’t go so well all things considered. Their run on “Hulk” was relatively critically reviled, with us being no different, and while Rulk and Red She-Hulk and other aspects of the ‘World War Hulks’ fallout has actually given us some good characters and books, at the time “Hulk” represented a certain aspect of comics that was just disappointing. It was very specific in what it wanted to accomplish, but that’s honestly not saying too much. So to say that the creative team was on relatively thin ice from the internet fanboy peanut gallery is perhaps putting it lightly.

And yet, here’s “Nova.” It’s a book that is going to surprise a lot of people.

Why? Well, to be perfectly blunt, “Nova” #1 is quite a good read. Great, even. It’s fun and all-ages (even with its T+ rating), it’s funny, it’s full of action and great artwork and it completely revamps a title in a way that doesn’t feel offensive to old readers while being completely exciting for new ones. It’s pretty much that sweet spot of a #1 that most major comic companies try to hit, one that straddles that difficult line of expectations vs reality that so many readers have, and it is definitely a major surprise in terms of how exciting the future looks for this book.

Lets put it this way. Remember when Marvel launched the third volume of “Ultimate Spider-Man” with Miles Morales? How we were given this slightly familiar origin story with a brand new character, and yet we all essentially fell in love with Miles and his trials and tribulations right off the bat? That’s “Nova” in a nutshell, and that’s a very good thing.

One thing that’s clear, though, is that Loeb and McGuinness feel no real need to reinvent the wheel here. Truth be told, the only ostensibly detrimental part to the book is how paint-by-numbers it is. We’ve already seen origin stories like this in comics before, let alone other media, and there’s a fair chance that we’ll see origin stories like this again in the future. It’s just kind of a dull trope, one that has been diminished to an extent over time due to overuse. And yes, realistically, there are only so many origin stories that we’re ever going to get at this point in the game, but you’d imagine that for something as high profile as this comic wants to be that the books team might try a bit harder and not play it so safe.

That said, despite the fact that the books main plot follows in the footsteps of too many origin stories, it becomes affable due to its sentimental nature. That’s really the major selling point here: the book may read as an atypical tale, but the familiar setting allows us to focus more on the characters, and it just so happens that the Alexander family is extremely likable. One thing that Loeb does extremely well is provide a human angle in his story, which is shown in excess here as we spend just enough time with Sam, his sister and his parents to feel like we’ve known them for years. While the otherwise stereotypical nature of the story does effect that to a degree, I’d find it hard to believe that most people wouldn’t want to see where Sam’s story goes from here from the first issue alone. It’s just charming.

Of course, the caveat to this is that the pace of the book is not well done for a comic book. Loeb’s a TV man and this issue pretty much enforces that aspect. “Nova” #1-5 or 6 is going to make a great story, and it’ll make for a great read in trade, but the way the issue is structured makes it clear that the where the book ends is supposed to be a commercial off of an hour-long pilot. It’s not that it’s a bad introductory issue or anything like that, but all things considered there’s a lot in the book that seems there only to push out the pages. While that doesn’t hurt the book (too much, anyway), it does become clear through the narrative structure of “flashbacks” and that this book takes place in the past that the real oomph of the story isn’t going to get kicking for a while. This is basically just a flat-out origin story, and Loeb and McGuinness seem comfortable enough to take their time on it. Whether that hurts your periodic read or not will likely be a personal affectation, but it’s certainly a notable aspect of the book.

Suffice it to say, this is the Jeph Loeb that made Jeph Loeb famous. Loeb’s more recent work, with “Hulk” or “X-Sanction,” have all been less than desirable in terms of storytelling, but Loeb had proven himself capable of telling stories with real heart to them, as opposed to flashy ones with little to no sense. This is a book that shows just how good of a writer Loeb is capable of being, and while Sam Alexander’s past appearances have all felt throwaway or pointless, here he actually feels like a character with some depth and intrigue. There’s even a casual hint given as to how this book fits into the work that DnA did with the Cosmic Marvel U and the last iteration of “Nova,” and the trick to how we can have a new “Nova” now is actually quite well executed. Granted, “Nova” still plays off of some of Loeb’s known weaknesses, such as his penchant to write more for television than a comic as well as an emphasis on teen stereotypes that feel relatively outdated, but here more than ever they feel forgivable. “Nova” #1 isn’t just a throwaway tale that feels like a stunt; it’s the beginning of a cosmic epic, and one that’s already fairly exciting.

On top of that, this is the best work Ed McGuinness has done in quite some time. Again, this is partially based on what he was doing before, with “Hulk and “X-Sanction” and this ridiculous emphasis on excessive machismo and muscle, but with “Nova” McGuinness’ work is much more even. It allows for a cartoonish nature, but the characters don’t feel overdone or blown up; they all have aspects to their beings that make them feel more real, whether it be a facial tick here, a wry smile there, any number of pouting faces or their clean and even builds. It’s nice to see McGuinness draw a book where rippling biceps aren’t the main attraction, with something that shows more thought to how people really look. Sure, McGuinness draws a lot of superhero books, and superheroes are cartoony and full of raging muscles, but this more focused approach to characters closer to something you’d see alongside any of Marvel’s Disney xD cartoon line-up is rather refreshing.

Where McGuinness really sings, though, is with the intense and gorgeous scenery of the book. The book is just massive in scope, with McGuinness illustrating everything from epic space battles to quieter schoolyard moments, yet there’s never any major difference in the handling of either. A lot of attention is given to the worlds that this book takes place in, and that gives the book a rather incredible visual feel. There’s also a lot of attention given to angle and perspective that plays incredibly well within the book, allowing for McGuinness to play with wry details that are only visible on a close inspection of the artwork – just take a closer look at the Nova helmets for an example – and you can only imagine how amazing the book is going to look when we leave Earth for the unknown. If there’s anyone who can bring that to life in new ways, it’s certainly Ed McGuinness.

So when it comes down to it, “Nova” is a rather exciting prospect. Loeb and McGuinness’ take on the Nova Corp looks quite intriguing, and if you can get past the tropes and shake off all the deja vu you’ll feel while reading the issue, there’s a lot to like. Sam Alexander seems like he’ll be a fine addition to the greater Marvel U if the first issue is any indication, and this is as open and friendly a door as the Cosmic Marvel U has ever seen.