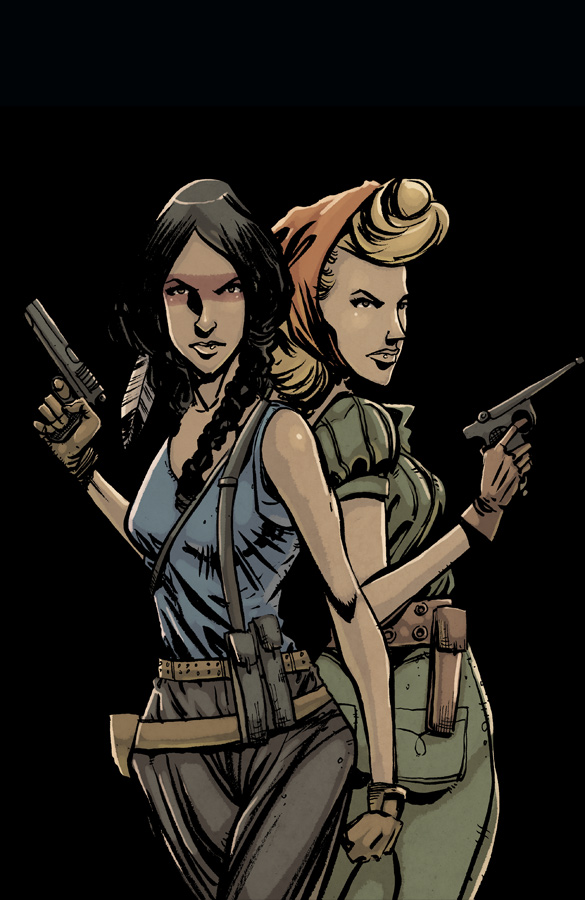 Let’s just take a moment to contemplate how badass that cover is. 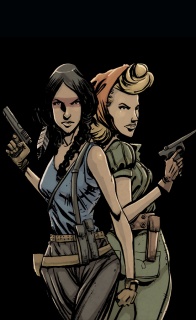 “PARIS” Conclusion
The aftermath of a dangerous rescue mission leaves the group fractured and forever changes the face of their war.

While the last issue ended on the bleakest note yet, with Peter and the Lost Boys very much in the clutches of Captain Haken, it was hard to despair when the cover to the next issue looked like this. Tiger Lily and Wendy looking badass equals rescue attempt that is very likely successful, right?

Well, there aren’t going to be any spoilers in this review, so I’ll leave that question hanging. That said, plotwise, there is quite a bit going on in this issue – it ticks along (see what I did there?) at a fast pace, and has none of the dark existential musings of the last one. Curly, our narrator, is in many ways skimming over this story as rapidly as possible, delivering the most important information rather than immersing us in a particular situation, as was the case with #9 and, last arc, #4. Fair enough: we’re wrapping things up and getting some loose ends out of the way before another narrator takes over the story, and while the fast pace does take away from the drama of the opening scene somewhat, it gets us where we need to go and the emotion is always running high. The events themselves are all novel, but credible, showcasing Wiebe’s trademark attention to detail as well as the solid amount of research that must have gone into this arc in particular.

As usual, Tiger Lily’s a bit of a scene stealer, getting a couple of great one-liners and bold, dramatic panels. We finally do get a bit of information as to her origins at the end of the issue – an odd choice of pacing, except that it’s Tiger Lily, and anything to do with her seems to work pretty well, because her character is just so downright compelling. In a lot of ways, her presence has been the focal point of this arc, and she gets an appropriate amount of time in the spotlight here – as well as a prominent role in the highly emotional tone of the issue.

She also features in one of Jenkins’ most unusual layouts so far, a kind of sunburst motif which patterns out an action scene and works very well at that. Similarly, while close-ups have for the most part been avoided so far, in favourite of longer shots where composition, more than facial expression, gets across the emotion, we get an unusually compelling one of Wendy near the halfway point of the issue. It’s an important moment storywise, as Wendy sheds light on the part of her character that has often been hidden, and this bit of emphasis is executed beautifully.

Generally speaking, Jenkins’ work, while occasionally stiff, has been revealing all kinds of subtle facets over the course of the series, and one of the wonderful things about this issue is that it showcases his wide stylistic range. There’s everything from rainy, dire scenes, to joyful splash pages, to drawn out, muted and thoughtful sequences, but Jenkins’ lines and Heather Breckel’s colours capture each mood with flair.

Ostensibly, this issue ends on a lighter note, but some moments in Curly’s narration hint at further darkness to be explored and endured as the series moves on. It’s a delicate balance – achieving that sense of closure without tying everything up completely – but this issue manages it, gesturing toward further complexities and bits of detail for the next narrator to explore. And so, while it does feel a bit rushed, this is a satisfying conclusion to the Paris arc and a solid issue in its own right. There’s just very little indication as to where, specifically, this series is going to go – so for the moment, we’ve got to sit tight and wait for the crocodiles to come a-chomping.