The second miniseries of the New 52 to focus on a once and future Freedom Fighter, “Phantom Lady” (titled on the cover, but not in official literature, as “Phantom Lady and Doll Man”) acts as an origin story for these characters, telling a self contained tale that establishes the characters and their place in the DCnU. The question is: should you care?

If you care about spoilers, be warned they follow. 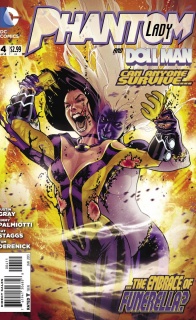 After an exciting battle with Funeralla and her zombie army, Jennifer Knight a.k.a. Phantom Lady, is finally ready to take down the Benders with the help of her tiny sidekick, Doll Man. But can the duo successfully break into Cyrus Bender’s office to steal incriminating evidence? Or will Bender send them to their graves like the rest of Jennifer’s family? And don’t miss two special guest stars from the DC Universe!

First, the good news: “Phantom Lady” #4 is probably the best issue in the mini, so if you’ve made it this far, this issue shouldn’t be a disappointment. The series wraps up nicely, with the villains dispatched, the heroes triumphant, and a very clear path for these characters moving forward. The bad news here is that, while this may be a solid issue of the series, the series as a whole is pretty poor. And, the problems that plague the book in the first three issues are still here, they just have the volume turned down enough to be unobtrusive.

The series as a whole is far too long. Unlike “The Ray,” the other Freedom Fighters mini, this story felt like it was pitched as a one shot, or a two issue arc in “DC Universe Presents.” Decompression may be the name of the game in comics today, but in this case, nothing about the book was appealing enough to make the four issues worth seeking out.

A big part of that is that Jennifer Knight is not a very appealing main character. She is disloyal, openly uses Dan (Doll Man) for an ego boost, for sex, and for help on her vigilante quest, and is so single-minded on her goal of revenge that she becomes a terrible person herself. If this was the goal of the writers, to expose her as a hypocrite and to use her arc to make her a better person, that would be one thing. Sure, there is a teary scene of her realizing she used Dane, but that is only because he appears dead, and doesn’t address the laundry list of other people she’s hurt throughout the series.

This book also buys into the uncomfortable new cliche of a female character using sex to get what she wants. This is not about going back to a puritanical “women in comics can’t be sexual” place, but there is a disturbing trend of whitewashing characters, usually female, who use sex to get what they want. If a man where to act the way Jen acts throughout this series, he would be seen as a womanizer and a bad person. But, because Jen can be drawn in a way that is supposed to look sexy to the predominantly straight male comics audience, her use of sex as a means to an end is accepted and not questioned. Even Dane, the worst used of the bunch, indulges her because she’s a pretty lady.

There is a very sad (not intentional) scene where Dane basically begs to watch her shower, and she insults him not only because of his miniature stature (caused because she brought trouble looking for him) but also because he’s just an accessory to her, and since she doesn’t need anything he isn’t willing to do right now, he can go “be a perv and surf the internet.” This is our protagonist?

Cat Staggs does some adequate work here, but it really suffers in any action scene. Her mouths appear agape or screaming in every panel of battle, whereas her other work is far more subtle. I do wonder if, as a woman, she is at all uncomfortable drawing a tiny many literally draped in a woman’s panties, but for all I know she’s fine with it. She also has a hard time with the black light constructs which, admittedly, have their own unique look, as opposed to being darker Green Lantern constructs, or a poor man’s Shade’s shadows. But the constructs, especially in this issue, are just thick lassos, holding the perps at bay.

In this final issue of the mini, Jen never once enters her phantom mode, which seems like a bad idea, story construction wise, and also shows how non-threatening Bender, as the big bad, really was. If she only needed half of her skill set, and using the simplest/least difficult part of the powers at that, to stop him, how bad could he really be? The tragically titled Funeralla was a far more captivating villain from an action sense, and she was dispatched of in this issue without so much as a fight.

That half-cooked nature of the story really hurts it because, aside from the characterization and art problems, this could have been a good one shot, especially with the ending of the Ray and the new Uncle Sam (more on him in a second) recruiting Doll Man and Phantom Lady to join them (the name Freedom Fighters is never said, but c’mon). Clearly, DC have positioned Palmiotti and Gray as the team to bring the Freedom Fighters back (again), and are letting them unfold the characters in miniseries (like “Human Bomb,” starting next month) before launching an ongoing team book.

DC’s obsession with the Freedom Fighters is bizarre to me, as the characters have never really worked in the modern era, nor have there been breakout characters from the team that have succeeded elsewhere. It is really astounding that DC doesn’t want to work out a way to bring back fan favorite characters like Wally West or Donna Troy, but instead will release three four issue minis to build up a team book that won’t last a year. Perhaps Palmiotti and Gray have a deep love for the characters, and DC wants to keep them happy – that’s a valid point, but for a company so quick to cancel sluggish books, it seems like, in the long run, keeping Palmiotti and Gray working is a better way to retain them than to give them a book destined to fail.

The new Uncle Sam we see here is no longer a giant man dressed as a character out of folklore, which is a good thing. He is now an African American man with a van dyke, which means he’s basically a suit wearing Nick Fury from the Marvel film universe, presumably kicking less ass. Again, I get why you don’t want a caricature walking around, but when there is a popular character with an established look, why try and ape it so clearly? Black dude with a connecting mustache and goatee, who happens to be a government bureaucrat, who happens to be recruiting a team – sounds familiar, doesn’t it?

Ultimately, this is a book that doesn’t work on any level – I’m not interested to read more of these adventures, I didn’t particularly enjoy the adventures I did read, the proposed “Freedom Fighters” series still seems like a bad idea, I didn’t love the art, and I didn’t love the story. And while there are good characters still on the shelf, doing a Phantom Lady book – cousin to Ted Knight or not – seems like a silly exercise in confounding your fan base.

Final Verdict: 2.0 – Shrink it down and give it to Doll Man to get his jollies with