You don’t get much more of a provocative title than “Punk Rock Jesus.” When you mix in the IRA, genetic engineering, carbon dating, infanticide, reality television and international waters, you get a book that has almost limitless possibilities. When you add to that the artistic talent of Sean Murphy, inking his own pencils in stark and glorious black and white, you get one of the finest comics to be released this year. 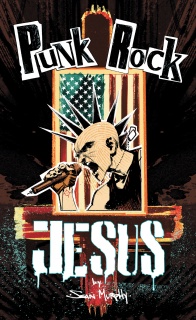 Written and Illustrated by Sean Murphy

The newest reality show hit has the unlikeliest celebrity of all in this new black and white miniseries from writer/artist Sean Murphy (JOE THE BARBARIAN, Off Road)! J2, the TV series starring a clone of Jesus Christ, causes chaos across a near-future United States in PUNK ROCK JESUS, a new miniseries written and drawn by Sean Murphy, the acclaimed illustrator of JOE THE BARBARIAN and AMERICAN VAMPIRE: SURVIVAL OF THE FITTEST. J2 causes outrage and adulation. Religious zealots either love or hate the show, angry politicians worry about its influence on the nation, and members of the scientific community fear the implications of cloning a human being at all — let alone the Son of God. And what effect will this all have on Gwen, the young woman who is selected, through an American Idol-style process, to be the mother of the new Messiah? All this leads to the hiring of Thomas McKael, the clone’s bodyguard and a former IRA operative with a turbulent past who must protect the new Messiah — a baby who captivates the world, but grows up to become an angry teenager.

The basic story is this: scientists have used the Shroud of Turin to suss out some Christ DNA, and they are preparing to clone him, birthed again by a virgin, and to create a reality show out of his life. This, of course, is creating an uproar from both the scientific community and the religious community, and whatever common ground that might exist has been wiped away. The world is counting down to this “second coming,” and neither side is truly sure what to make of this.

We barely meet Chris, the clone of Christ, in this issue, but we get introduced to some of the other characters populating this world. We meet Thomas, a former IRA child soldier who is hired on the security detail for Chris and the scientists working with him. The story of Thomas is what opens the book, and it is instantly heartbreaking, maddening, and formative. One of the nice things about how Murphy has structured the story is that it all seems plausible, if a little far fetched. Nothing in the book, from Thomas shooting his father to the genetic engineering of a clone seems all that out there. There is a tether to reality that makes the actions sting a little more, but the book isn’t so rooted in reality that there isn’t room to play around.

We are also introduced to Dr. Sarah Epstein, the reluctant scientist cloning Christ, who is really doing this to secure funding for more beneficial projects, and Slate, the Ophis employee in charge of the “J2” project. These two characters represent science and capitalism, and the uneasy bond that exists between the two fields. Caught in the middle is Gwen, the woman chosen to be the “Mother Mary” for Chris – she will be provided with life-long care and fame in return for renting out her womb.

Everything goes to plan, except that Gwen is carrying a baby girl as well. She is knocked out, so that even she doesn’t know there is another child being born. Slate takes this baby and, ahem, disposes of it, at issue’s end. Slate will do anything for the J2 project to succeed in exactly the way he’s laid out, and sorry baby girl, you just aren’t part of that plan.

I have to commend Murphy for the even-handed tone he is taking with the characters thus far. Although we do have a fire and brimstone preacher in one scene, people of faith and people of science are presented essentially in the same light. It could be easy to make all the Christians look dumb or all the atheists look smart, but that would be a boring story, and Murphy is smart to even the playing field a little bit.

Murphy’s art is the real gem of this book, and from Gwen’s innocence to Slate’s cold heart, Murphy is a master of drawing people revealing their true intentions on their faces. Greed, intelligence, rage, confusion; all of these emotions live beneath the eyes and in the cheeks of Murphy’s characters. Unlike so many artists working today, people don’t have to be screaming to look mad; his subtlety in a story where subtlety could so easily be lost is refreshing.

My only complaint here is that, for a guy who has sported a mohawk more than once in his life, I want some punk rock! I’m sure that is coming down the pike, but I can’t wait for some misguided fashion choices and reductive thought from teenage punk Jesus. But all in all, this book hits all the right notes, and sets up a world of possibilities for the remaining five issues. Count me in.