This is, technically, the fourth installment of ‘Rise of the Third Army,’ and thus far each of the Lantern titles in the crossover have had a remarkably similar pattern. Continuing old storyline for 2/3 of the book and then BLAM!, in come the Third Army. While this is a good technique for people not reading the entire crossover, I have a feeling that most people who read “Red Lanterns” read at least one other Lantern book, and so by this fourth time through the same process, it feels pretty stale.

Be warned that very light spoilers are discussed, so proceed with caution. 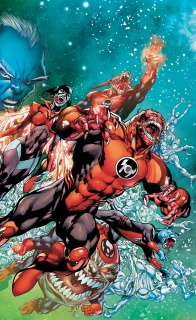 Written by Peter Milligan
Illustrated by Miguel A. Sepulvida

“Stale” is a pretty good term for this book so far; it is, undoubtably, being buoyed by its Green brethren, because in terms of purely enjoyable comics, this has been much better than many of the cancelled New 52 books. The idea for the series may be a fundamentally flawed one to boot, and with a writer as skilled as Milligan unable to make the book a must read, there has to be a conversation happening at DC about how much longer this book will continue.

This issue follows the pretty standard “Red Lanterns” formula: on a planet somewhere in the universe, injustice is being performed and people are feeling all rage-y. Elsewhere, while doling out justice, Atrocitus and co. sense the great rage and fly to help the abused/claim a new Red Lantern. The issue here is that the characters as non-Lanterns are far more interesting/sympathetic than when they become Lanterns, and so the book loses most of its pull once someone becomes a Lantern. A winning formula this is not.

Now, as stated before, this issue ends a little differently, with the Third Army rising and whatnot, and it is in this issue that the first real weakness of the Third Army is revealed, and that is their eyes being a weak point, as well as a leftover from the creature they corrupted to become a Third Army Corpsman. It is for those two revelations that this issue exists, and beyond that, this issue is simply more of the same.

The early parts of the issue, when dealing with the potential new recruits, are well-written and heartbreaking; Milligan understands pain and rage, but as soon as the Red Lanterns get involved, all the air is sucked out of this book. And none of that is the fault of Miguel Sepulvida, who continues to do good work in the New 52. He does a fine job with the various planets in this issue, specifically, giving them a unique look that still has some sort of connective tissue. His character work is nicely done, too, with the Red Lanterns each having a distinct look and a stylized appearance. Ed Benes, who launched this book, made everything look too much like a 90s Image book, instead of where this book should really be aiming, which is to a 90s Vertigo book, and Sepulvida does his best to give that vibe. Bleez is shiny and sleek, Atrocitus shows his hardly contained rage at every moment, Rancorr burns both literally and figuratively in every panel.

What hurts this book is that it tries to be like “Green Lantern Corps,” only for Red Lanterns. Milligan and Sepulvida should really be trying to take this book to someplace totally different. If you’re going to pick this Corps to focus a book on, then really make this a book about rage. Make it brutal, make it stand out; no one needs to see Red Lanterns playing team up to take out bad guys – literally every other team book does that. Shake things up a little bit, and the book will have a chance to succeed.

But at this point, this book is in a very stagnant place, without much going for it outside of this crossover. The solicit reads that a “Red Lantern will die,” and the book delivers on that, but if you expect it to be one that you’ll miss, well, you may be a little disappointed.