Few comics come with the pre-release hype that “Saga” did. Brian K. Vaughan is the creator of one of the most acclaimed series of the past twenty years, “Y: The Last Man,” and Fiona Staples has long been cited as one of the best female artists working today (which isn’t really true; she’s one of the best artists, gender be damned) working today. A book this anticipated seems destined to disappoint; how could any book live up to the expectation s of twenty thousand fanboys? 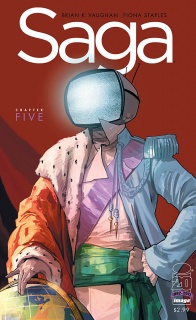 And yet, “Saga” has been a critical and commercial hit, and in most corners of the internet (including our cozy little corner here at Multiversity), the book has managed to please month after month. And yet something just wasn’t clicking for me yet with this book. Sure, the art has been fabulous, the story engrossing, the characters interesting, but something about it doesn’t make it the book I’m anticipating the most every week coming home from the shop. I began to feel like I was missing something.

So, last week I decided to re-read the entire run in one sitting. This is something I try and do with a book every week or two, for a few reasons. First of all, it helps to refresh small details that I may have forgotten over the weeks and months since I first read an issue. But more importantly, it lets me in on the story the creators had in mind because, let’s face it, serialized storytelling isn’t a natural way to read stories. It is a way I enjoy, but it isn’t the way we create, it’s the way we consume. And so, sometimes it is easy to forget that while Vaughan writes issues to be read in pieces, and while he may not have every plot point perfectly parsed ahead of time, the story is being written in a much more compete way.

While re-reading “Saga” from the start, I was better able to get a grip on the pacing of the story, which was one of my biggest problems with the book thus far. The Will’s story also began to poke through as the most interesting of the bunch, despite being a relatively familiar one. It is hard not to be reminded of Han Solo in his character — a morally ambiguous fellow with a mostly mute, furry sidekick, who may not have the typical code of ethics, but certainly has a code. While we’re at it, Lying Cat is an ingenious storytelling tool and one of the more fun creatures I’ve read in a comic in a long time.

In this issue, we see The Will’s extent of his kindness in trying to rescue the Slave Girl from her life of prostitution. This trio of Slave Girl, The Will and Lying Cat is where I want the story to keep focusing on, and for that reason I know I’m going to be in for a disappointment.

Marko and Alana’s story was less interesting this month because Izabel isn’t present. It’s unfair to call their portion of the story boring, because a lot happens, and all of it is interesting, but everything else is just so much more interesting to me. Vaughan and Staples have created this rich world, where multi-armed bounty hunters, the ghosts of dead children, and feline lie detectors are all part of the landscape; two star-crossed lovers from warring families just isn’t doing it for me when put up against that.

Case in point: Prince Robot IV finds out his wife is pregnant, which blows my mind, because I thought that, as a robot, he couldn’t naturally reproduce offspring. A square head can’t make for an easy birth, so I feel for the princess. I also nominate Prince Robot IV as the single best character name of 2012. It is so direct and simple and glorious that I can’t believe its taken millions of years of humanity before someone stumbled upon its brilliance.
Continued below

This issue also reinforces the belief that children, and the concept of a childhood, are so important. IV wants to complete his mission so he may witness the birth of his child (the irony is lost on no one that his mission is basically to orphan a child, if not flat out kill one). The Will can’t bear to see a child being a prostitute and wants to give her back some sort of childhood. Hazel, by being the result of a union of warring factions, represents the hope of children living in a world better than the one their parents lived in. It may be clichÃ© to say that “the children are our future,” but in “Saga,” that is absolutely the theme.

And in that theme, Staples has a lot of room to incorporate complexity into her artwork — The Will wears a cape like a hero, has the job of a villain, the heart of someone who still believes in right and wrong, and wears all of that, and more, in his gaze. Staples draws the weight of the world on his face. Similarly, even after being attacked from all sides, Alana and Marko have the glow of new parents about them at all times. When they’re fighting, you can see the determination to protect their child; even if Marko wasn’t expressly a pacifist, there is no way you could read joy into his fighting, because Staples makes it clear just how painful it is for him.

Staples’s art is so multi-faceted that she can draw something that appears pretty straightforward, and the more you look at it, the more sides you see. Take Mama Sun, Slave Girl’s owner. She is drawn wearing a thong and a corset, and while drawn to be a fine physical specimen, the art never suggests that she is meant to be lusted after. She is a soldier in a world of sex, and so dresses the part. The holster she wears on her hip has more cloth than her undergarments, and that tells you all you need to know about the character.

In the end, I am hopeful, about both this book and the fate of the characters within. I want to believe that The Will’s crew won’t hunt the happy family, but help them. I doubt this will happen, but having some hope for this poor couple and their already war-affected child isn’t the worst thing in the world. And I think this book has done such a fine job of world building thus far, that as the series expands, it will be one of the richer books on the market. But I stand by my statement that this would work far better in trade than it does in single issues. But, if we’re being truthful, doesn’t almost everything?