“Sex Criminals” has been nothing but excellent since it’s debut. But as the old saying goes, “there’s a first time for everything” as “Sex Criminals” #7 is a little bit of a misstep this week but still proves to be an enjoyable read. 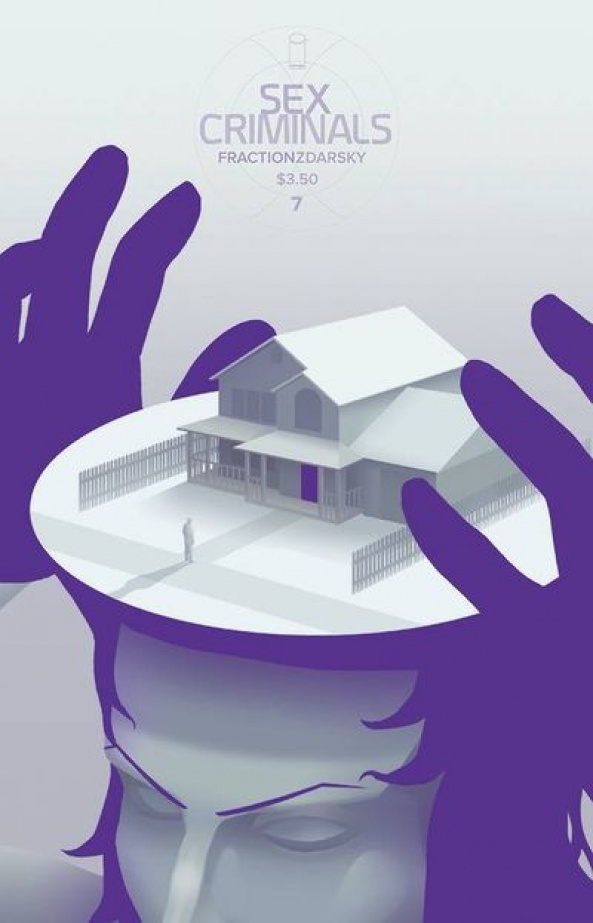 Jon breaks into Kegelface’s house and oh my golly what on EARTH do you think he finds there. Not only are our beloved Sex Criminals not alone…they’re not unwatched, either. And Suzie learns once and for all the fate of her precious library.

“Sex Criminals” is great. Like, really great. Matt Fraction and Chip Zdarsky didn’t win that Eisner for no reason. This month, though, is a slight misstep in the story. This issue is full of crazy one liners and acts as a nice bridge but doesn’t quite come up to the high standards of previous issues.

“Sex Criminals” #7 shifts more of the focus towards Suzie in this issue and this was much needed. With Jon taking the spotlight last issue (in a great look at mental illness), it is time to catch up with Suzie, the lady who stole our heart from the very beginning. As we saw last month, Suzie hasn’t been interested in sex very much since the couple’s run in with Kegelface and the Sex Police. This is partially due to stress and partially due to the new birth control she’s on. She’s under pressure to save the library and during all this catch up with Suzie, we find out that she’s friends once again with Rachel. This is just in the first few pages; Matt Fraction and Chip Zdarsky then take us back to focusing on Jon as he continues his scheme to get revenge on the Sex Police for the stress they’ve brought into their lives. We get even more backstory on Jon — oh, and a dildo fight.

Let’s begin with what really works. The humor is just as great as it always has been. There are quite a few panels where the one liners hit perfectly. It’s odd because you’d think that a comic couldn’t have good comedic timing; you are, after all, reading it inside your head. But in all actuality, the jokes are inserted at the perfect moments within the issue. Inside some of the more serious moments, such as Suzie apologizing to Rachel, there’s her going into “the quiet” and drawing, ahem, stuff on her face to prove her point.

The focus on Jon last month was much needed and the direction taken was insightful and poignant. It took a look at mental illness from a very realistic point of view. It was not written in more melancholy way. It was painfully funny at times because it was so relatable. Jon struggles with some out of the ordinary issues and takes his feelings out in sometimes bizarre ways. The most important thing to note here is that it kept him likable.

Jon is not completely unlikable at this point, but this issue did no favors for him. He’s incredibly immature. Nothing he’s ever done has come with consequences. It makes him flawed, which we need, but some of the things he’s done are not really okay and are hard to understand. At the same time, we need to know these things and get in his mind more than Suzie right now in order to understand why he’s going about getting revenge this way and why he feels he needs to even do it. My biggest issue here is that he’s not completely relatable as he was before. He’s much tougher now to like.

This also comes at the expense of Suzie’s development, as I feel this is the first time that we’ve really seen her in a long time. I wish we could see more of Suzie in the know; “Sex Criminals” began as Suzie’s story and has turned into her not even aware of what’s going on. It’s time to get Suzie in the game and let her kick some ass against the Sex Police.

For all the jokes made about some of the bizarre things Chip Zdarksy illustrates in “Sex Criminals”, it’s worth reminding readers that his art is top notch. He brings emotion to all the characters, and even something as silly as Suzie splitting her pants is painful to watch but fun to laugh at. He’s at his best, I think, when he illustrates “the Quiet”; It’s very cool to see how he contrasts the background to the neon swirls. You see Suzie or Jon in a panel almost disconnected to the rest of the world. It’s not quite 3D but it feels that way. Only a talented artist could do that, so let’s never forget how talented he is.

“Sex Criminals” #7 is still bringing the funny but it does struggle a little bit when it comes to the story. It’s moving forward but relying too much on Jon, who’s beginning to suffer as a character. The issue is not bad but I do tend to a have higher standards for this series.

Final Verdict: 7.5 – Buy it but beware. This isn’t the best issue of the series.