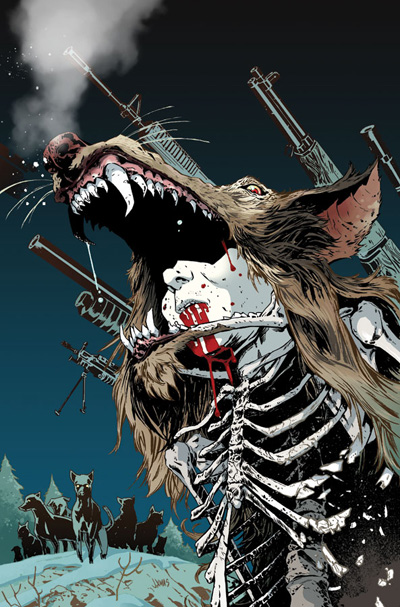 The last time we checked in with “Sheltered”, the going was slow but certain, with the politics of a cultish pre-apocalyptic community coming across gradually. In the interim, the pace has picked up, with Victoria emerging as a fierce character and Lucas as an even more deadly and misguided leader. This is the most disturbing issue yet, for that last reason, but also one of the more complex; and if you’ve been enjoying “Sheltered” so far, you’ll find yourself drawn in even more strongly now. 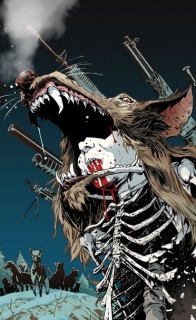 Victoria and Hailey find themselves hunted, their only salvation the trappings of a bunker. Lucas’s true colors begin to show as he takes deadly measures to maintain control of the survivors.

It’s been fairly evident since the beginning of the series that the apocalypse this community has been preparing for is not something the world at large acknowledges. And (to jump straight to the second most intense moment in this issue), what we find out in regards to that subject is nothing short of gobsmacking. We know Lucas spearheaded the murders of everybody’s parents in the community; here, we find out what he did it in the name of, and it’s absolutely crushing.

Victoria is our angle into this story, and the revelation hits as hard as it does because her reaction is so immediate and so vehement. She’s already proven to be an interesting and tough character, holding her own in a underground bunker alongside the injured Hailey, but her outright contradiction of everything Lucas is trying to sell is a powerful moment indeed.

As for the community surrounding Victoria, which is (for the most part) continuing to do Lucas’s bidding, we’re getting more of a feel for the diversity of the residents and for the quality of their allegiance to Lucas. This is definitely not a mindless, brainwashed army, and there’s evidence that they can be steered aright despite what they have already done. That said, the gap between Victoria and the other residents in terms of rational thinking is still incredibly wide, and at this juncture, it’s hard to account for why she has such a clear perspective on everything, while they fail to see past Lucas’s orders.

Johnnie Christmas’ art continues to be somewhat eccentric in that characters are simplified into minimal lines when viewed at a moderate distance, and this can make them difficult to tell apart. The real impact is in the close-ups, where emotion is rendered in a coarse and hard-hitting manner. Christmas might be pushing this effect a bit too far in regards to Hailey – it’s hard not to dislike her, and there’s no reason to, yet – but otherwise hits the strong emotional notes at just the right moments.

Lucas, meanwhile remains a study in balancing heroic qualities with despicable ones. At no point are we able to forget that this is the charismatic guy who got everybody to do his bidding; he’s got that golden-boy glow about him, as well as moments where he looks, disarmingly, like an insecure young guy. It’s this subtlety of portrayal that makes his actions – and manipulations – all the more ghastly.

Speaking of ghastly, there’s the last sequence in this issue, which I won’t say much more about except that Christmas does an appropriately gory job of it, and the impact of it comes through loud and clear. It’ll also probably break your heart a bit.

As always, Shari Chankhamma’s colours lend a solid sense of atmosphere to the art. It’s ironic enough that this story takes place on a series of clear and beautiful winter days, and the delicate blues and yellows act as an effective counterpoint to all the carnage at hand.

Bearing the end of the issue in mind, this is definitely not the comic to read if you want to feel good about the world, or human beings in general. But as terrifying as things are getting here, I think the really interesting part of the story will be seeing how Victoria gets out of this situation, potentially building up a new community. Still, “Sheltered” has been and continues to be a reliable source of psychological horror, and it’s giving its readers more to think about than ever.