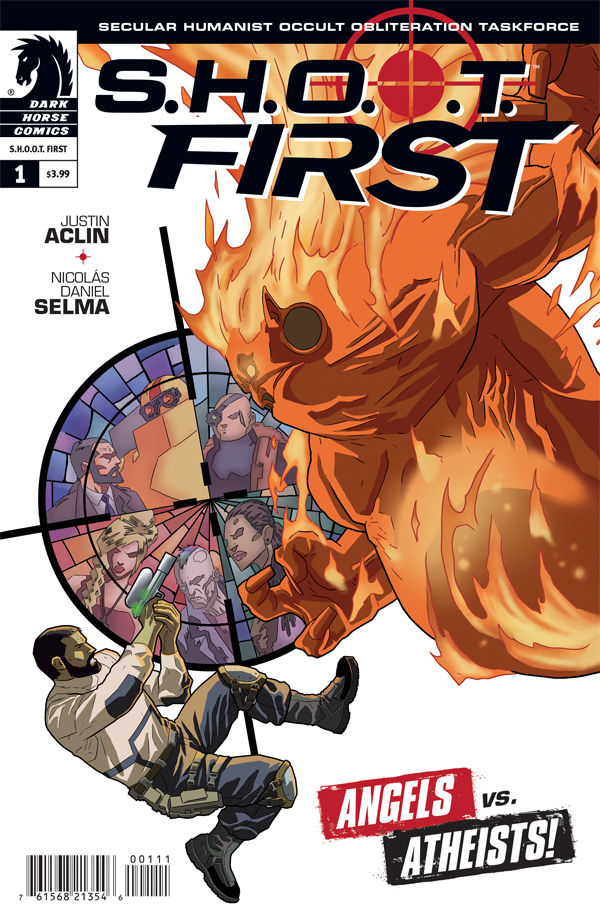 In this new series from Justin Aclin and Nicholas Daniel Selma, the stakes are high, the scope is enormous and nothing is sacred. “S.H.O.O.T. First” #1 takes on the entire institution of religion without mercy. 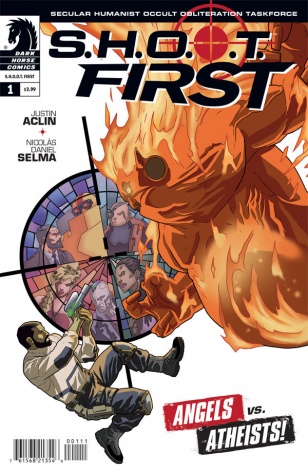 The Secular Humanist Occult Obliteration Taskforce—defending humanity from angels, demons, and a bunch of other crap S.H.O.O.T. doesn’t believe in.

* Aclin and Selma are the next “it” team in comics!

“S.H.O.O.T. First” #1 introduces a team of specialized agents who believe in the power of disbelief. The Secular Humanist Occult Obliteration Taskforce or, S.H.O.O.T., is waging a campaign against the pantheon of every major world religion, in an effort to to preserve the future of humanity. As the global population has begun to seek meaning in scientific study more often than through religious reflection; the deities recognized in various sects have begun to grow weaker due to the sudden lack of faith common in the world at large. With their very existence challenged, these angels, demons and assorted other-worldly creatures have set out to bring about the end of the world, each according to their own prophesied end-time agenda. By inciting an apocalypse that aligns with the faithful’s expectation, one sect will ensure that they have hordes of believers to prey upon for years to come. The creative team has offered up a truly original idea, the concept for this series holds seemingly endless possibilities.

Charged with the small matter of preventing a global apocalypse, the S.H.O.O.T. team faces seemingly insurmountable odds on a regular basis. Such a stressful job description demands a specific type of individual. Allowing mystery to build around the team members, Aclin and Selma introduce a cast that invites speculation and commands attention. The team is lead by Mrs. Brookstone, a commanding woman with a no-nonsense attitude. Aclin and Selma take the time to develop Brookstone’s home-life, giving her a context and creating contrast between her warm approach to mothering and her ferocious combat persona. Lord Byron, a rainbow-mohawk donning Englishman brings a sense of joy to the team as he makes wisecracks and finds levity in dark situations. Bett, a blonde Brit with heavy artillery and a light sense of humor, is obviously the heart of the team. Her sensitivity and acute emotional awareness set her apart from other members of the S.H.O.O.T. agency. Kenshin is a mysterious straight-man. A high-tech monocle is affixed to his head, hinting at a past that left him with lasting scars. The team is completed by a robot, aptly called, ‘Robot,’ who aids the taskforce on their missions.

After we, as an audience, are invited into Brookstone’s home to share a moment with the head of the team and her young son, we are quickly dropped into a maelstrom of action, as Jinn attack a mosque in Afghanistan. We are allowed to see the team in action through the lens of a man who has lost his faith, who happened to be on site at the time of the attack. As he witnesses S.H.O.O.T. in action, we learn more about the inner-workings of the agency, and the rules of this reality. After he proves himself a hero and essentially saves the entire team, we are given a glimpse behind the curtain of mystery that surrounds the group. Back at the S.H.O.O.T. base, we learn about the team’s agenda as he is invited to join them. This character expresses the concerns, confusion and hesitations that the audience might be feeling, and makes this story relatable. He calls himself ‘Infidel,’ and severs ties with his previous identity. The structure of this issue is highly effective. Party in the front, business in the back; it is the reverse mullet of storytelling. Aclin first illustrates how difficult it is to face these foes, who is on the team and the nature of the conflict that will drive this series, before diving into the specifics and explanations. This allows readers to become invested before attempting to digest the supernatural smorgasbord contained in this new world.

Selma’s artwork is incredibly articulate. From architectural structure to animated expressions, he illustrates this issue with clarity and careful attention to detail. When being asked to believe that the mythological creatures of the world have conspired to initiate the apocalypse, it’s a relief to find that we have not been asked to believe objects or characters come from thin air. Specific items, like a unicorn horn Bett uses against a Jinn, appear when the character makes their on-panel debut. Everything is accounted for before it comes into play, if a character becomes involved in a scene, he or she appears several panels before they speak or act. This effort to preserve reality makes it easier to suspend disbelief when the more fantastical elements of the story come into play. This attention to detail continues deep into the panel backgrounds. Crowds are composed of characters that look different, who seem to fill out the spaces rendered by Selma. Exact, clean, and clear his work makes this book accessible. Paired with the ferocious coloring of Marlac, the illustration of this book is one of it’s strongest components.

Full of conspiracy, controversy, and craftsmanship, “S.H.O.O.T. First” #1 is a powerful introduction to an original and unique new series.

Sam resides in Louisiana, and has a twang in her voice, even when her words are in print. Her first crush was Burt Ward. She reviews comics, writes features, and co-host podcasts at imageaddiction.net. She also blogs about comic books from a feminist, literary perspective at comicsonice.com You can find her on twitter @comicsonice where she makes inappropriate jokes and shamelessly promotes her work. Other than comic books, her greatest passions are applied linguistics and classic country music. She enjoys quality writing implements, squirrels, and strong coffee.