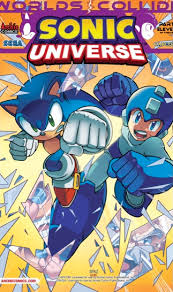 This is the eleventh part of the Sonic the Hedgehog and Mega Man crossover “Worlds Collide.” Was this adventure of The Blue Hedgehog and The Blue Bomber great or did the creators… blue it… Find out after the cut! 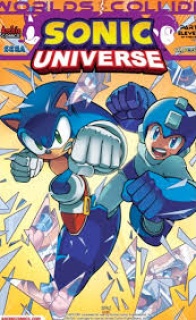 Sonic and Mega Man fight for their lives in “When Worlds Collide”: Part Eleven of Twelve! The evil doctors Eggman and Wily have completed their ultimate battle-weapon: the Egg-Wily Machine X—Powered by the Chaos Emeralds, it is the most powerful battle machine ever constructed! As our heroes do battle, Metal Sonic and Bass join the fray! Will the combined might of the Wily/Eggman arsenal be too much for Sonic and Mega Man to handle?! The answer will surprise you—ONLY available in this penultimate chapter of “Worlds Collide”! Featuring a zone-shattering new cover from Patrick “SPAZ” Spaziante and a special behind-the-scenes “Pencil Ink Color” variant!

Yeah we’re back to talking about Sonic the Hedgehog and Mega Man again. Don’t judge.

It’s funny reading the “World Collide” crossover from the relatively small Archie Comics and comparing it to Marvel and DC’s crossovers. The Big Two are so decompressed in their storylines that, compared to “World Collide”, it’s almost embarassing. Pretty much all of their latest tentpole storylines can be summed up in a few sentences. “Ultron took over the Earth so Wolverine fucks up time travel trying to save everyone and then un-fucks up time travel by committing chronal sepukku. Angela shows up.” “The Flash fucks up time travel, entire DC Multiverse gets transformed because of that one douchecanoe. Scott Lobdell shows up.” There’s a lot of common themes with Marvel and DC that make most of their crossovers forgettable a few months after their conclusion so they only ever truly serve as delivery methods for shifts in the status quo and kill off or bring back characters like Doctor Light of Scott Lobdell. Archie comics, however, has a different method as “Worlds Collide” seems to be one of the most dense stories I’ve ever read.

Some of that can be attributed to the fact that I haven’t read most of this crossover. The recap pages themselves are a gigantic wave of terms like “Genesis Wave”, “Chaos Devil”, and “Shadow the Hedgehog” that demonstrate how this entire storyline has taken advantage of both properties continuities and fused them together to make the biggest story possible, as all good crossovers should do. The individual issues aren’t damaged by this either, the premise is simple but effective and there’s almost no time needed to catch up. Even if you aren’t overtly familiar with Mega Man or Sonic, there’s still a lot of fun to be had. I know next to nothing about Mega Man and I can appreciate the inherent awfulness of Sonic’s “Time to drop the BASS!” line. Also, though my knowledge of Sonic the Hedgehog extends to the Game Grumps playthrough of Sonic ’06 and this video, there’s enough of a genuinely interesting plot to keep non-fans interested. Truthfully though, if you’re not a fan of either of these franchises it makes little sense to read the book. If you are a fan though, you’re in for quite a treat. Probably. I’m not a fan but I still had a good time.

The art, as pencilled by Ben Bates, works really well for the childish nature the story is telling and, as I’ve mentioned in a review of last issue, does a really great job of synthesizing the two franchises into one art style. Most of this issue is a fight scene, so the action’s gotta go fast and for the most part, Bates can’t catch up. There’s actually a really well layer-out splash page near the beginning, but towards the end of the fighting it all comes across as some sort of jumbled mess. Characters drift in and out of the fight for pages at a time, there’s no clear sequence of who’s fighting who, and there’s a couple of pages that are just an excuse to remind the reader that Mega Man absorbed all of Sonic’s friends powers. While that’s cool for a kid who could forget details like that in between their boogers and Skylanders toys, it’s a little too overdone for an adult reader like myself. Well actually, this book isn’t meant for an adult reader like myself so point to Sonic Team.

And that’s probably for the best. “Worlds Collide” is a really good crossover for the kidduns who love Mega Man and Sonic and if I were eight years old it would be my To Kill a Mockingbird. So if you have any spawn, be sure to let them take a peek at this issue. The writing’s a little shallow but still endearing, the art’s a little sloppy in some places but Eggman and Wily’s faces are funny and most importantly it’s that type of comic that never talks down to the kid reader which is alway something to be grateful for when found. Maybe it’s not the most sophisticated crossover, but it’s still a book that’s having a lot of fun.

Final Verdict: 7.8 – Browse if you’re suffering some Sega/Capcom nostalgia, buy if you have a small child or are one. And if you are a small child I apologize for the video I linked to.