I don’t think I can write a formal intro to this review without making a terrible dog pun, so I’ll just cut to the chase: there’s this comic published by 215 Ink coming out at NYCC and it’s written by Multiversity’s own Jeremy Holt and it’s called “Southern Dog” and it’s definitely worth a read! Whew. 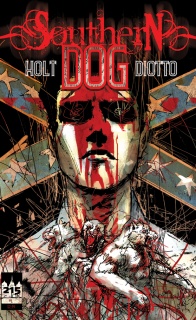 Inspired by such films as Teen Wolf and Ginger Snaps, Southern Dog examines the unique complexities of race, love, and what it truly means to be a family in the Deep South.

For Jasper, a teenager making his way through high school in the Deep South, “earning his stripes” in his family’s estimation has something to do with emulating his brother Jimmy. But, as is made abundantly clear over the course of this issue, he’s nothing like his brother, preferring to learn about history than the right way to slice up a freshly-killed deer. He doesn’t exactly question the vague, “traditional” Southern values that his father cherishes, but it’s clear that he’s not all that into them either, and when a racially charged conflict comes up at school it looks like Jasper’s caught up in a wave of old hatred that’s going to bear him along unless he takes a stand. Add to all this a strange encounter in the woods, and it looks like Jasper’s life is about to change in a big way.

One of the most remarkable things about this issue is the way the action is spaced out: there are some pretty heavy moments here, but they’re given a lot of room to breathe. Like any good Teen Wolf-esque story, there’s an emphasis on family dynamics, and awkward dinnertime conversations get as much — or more — attention as the, er, wolfier moments. It’s a refreshing approach for being a less commonly seen one, and the slower pace definitely affords the comic a stronger sense of mood.

In terms of theme, the comic has some good bones to it. Race is always a difficult issue to tackle even-handedly, but Holt does a nice job of setting Jasper apart from his circumstances and any inherited stances without making it seem like he belongs to another world entirely. The extreme attitudes on the part of his classmates, meanwhile, definitely help the drama along by implicating Jasper, and pushing him toward a situation where he’ll have to declare his difference from the others. And, recalling that this is a werewolf comic, he may be different in more ways than one. Having a supernatural concept illustrate a real-world problem isn’t a new concept, but it’s being employed to interesting — if not exactly subtle — effect here.

The main weakness of this comic is the dialogue: some words are written out phonetically to suggest the Southern accents of the characters (e.g. “We got that sumbitch now!”), and the effect is sometimes more jarring than realistic. It might have made more sense to write out the dialogue in a standard way, and have vocabulary and expressions hint toward the accent. As it is the accents offset the delicate thematic balance, and overstate the primitive aspect to the hatred that’s being acted upon.

Alex Diotto’s artwork, on the other hand, is nicely understated: it’s fresh and nuanced, sketchy but precise and lending a slow-moving issue a lot of energy. The faces are done a little unconventionally but the expressions come off well, particularly the subtler ones — like a smile Jasper isn’t quite sure that he saw or not, and an uncertain look that crosses his mother’s face at the dinner table. Diotto also sets out a fight scene with unusual verve, really getting across the speed at which the events occur. Adam Metcalfe’s colours are done in a similar loose manner, and keep to the pastels, maintaining a spacious and realistic feel that gives way to a darker and more ominous one during a wordless dream sequence. Last but certainly not least there’s that Riley Rossmo cover, and like pretty much every Riley Rossmo cover ever it’s killer. It also pairs up nicely with Diotto’s dynamic art style, really driving home the comic’s unique look.

Overall this is a fairly strong issue. If you come to it expecting werewolf antics right off the bat you will be disappointed, but at core this is a comic about race and about growing up, and it’s making good use of the slower pace as it explores these themes. This careful treatment of its themes as well as the nuanced portrayal of its main character are sometimes undermined by the comic’s tendency to underline its central metaphor too many times, but fundamentally, “Southern Dog” has an important story to tell and is doing so in high style.