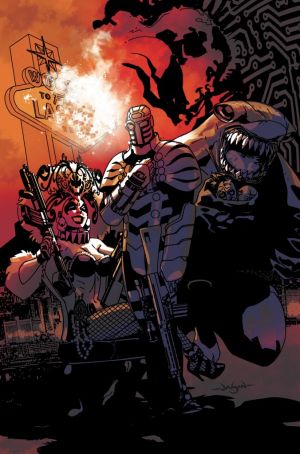 Man, Suicide Squad fans who don’t look up comic books on the internet must be thrilled about the new directions Ales Kot and Patrick Zircher have taken their book in because it is good. Read more after the cut. 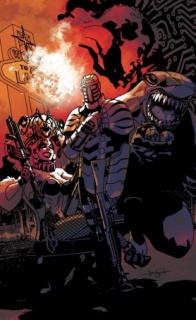 An anarchist group has a monstrous plan to rewire the brains of the American public, starting in Las Vegas! So it’s up to Amanda Waller’s team to shut them down—but a surprise new squad member with a grudge against Deadshot threatens to wreck everything!

There’s a reason everyone’s ruffles have been truffled over the recent news of Ales Kot’s departure from “Suicide Squad.” In just three issues, Kot has taken one of DC’s more generically written, too badass for its own good, titles and turned it around to the top of DC’s stable. The characters have been given new layers of depth, the inter-team conflicts have been brought to the forefront as Amanda Waller’s been taken down a notch in a way that doesn’t undermine the characterr, and the newest team members just make sense in the most ingenious of ways. In short, it’s clear that “Suicide Squad” is Ales Kot and Patrick Zircher putting all they can into making an incredibly fun (and gory and disturbing and newly vegan) ride.

Continuing from the first two issues of this run, which served as an introduction to what Kot has planned for the Squad, issue #22 is the team’s first mission and it is delightfully insane. Las Vegas, snappy dialogue, and one of the best concepts behind a city destroying monster that keeps it from being a typical creature. Essentially, this is Kot and Zircher having as much as they can on the page. It’s a high-concept type of spectacle where, yes the mission itself doesn’t seem to matter as much to the central narrative as other issues have, but the anarchist’s plans are a delightful side plot that leads to so many great moments for the team. King Shark steals the spotlight with one scene in particular, while Unknown Soldier drops off some incredibly vague hints about his nature. Ales’s dialogue is consistently funny and he has a great grasp on the characters, even when Deadshot cries to Amanda about a teammate like he’s a school kid tattling.

Gordon Jr. and Waller, arguably the centerpiece for the rest of Kot’s run, end up sitting in the bleachers for this issue a little bit, and that’s where this issue tends to stumble a little. The last page reveal, though possibly foreshadowed in #20 with Voltaic, ends up coming out of seemingly nowhere and yanks the perspective from the big fight in Las Vegas. Thankfully though, that twist ends up being a huge turning point for this series and sets up so many interesting places for the story to go from. So while the only hiccup in the writing comes from the plot twist’s abrupt presence, it’s still one of the better, smarter, last page reveals and one that changes the course of “Suicide Squad” for the better and removes one of the very few safeguards Ales Kot has left in “Suicide Squad.”

Though Ales Kot may be leaving “Suicide Squad”, Patrick Zircher is staying and that is definitely a great thing. His art here is a dark and grimy style that still manages to convey the jokes in Kot’s script near perfectly. His design for the issue’s big Pacific Rim work well too and distinguish it from any other giant city destroying creature. True, Zircher doesn’t do anything necessarily new with the layouts of the panels or anything, but his work is utterly consistent in its high quality. If there’s one silver lining to the creative changes behind “Suicide Squad”, it’s that Zircher is staying with Kindt.

Unfortunately, it’s still a real shame that Kot is leaving the title. In just three issues – heck, since the first few pages of his first issue – Kot has turned one of DC’s least admired books into it’s absolute best. That’s not to disparage Matt Kindt or anything, he’ll do a great job too, but the energy Kot brought on to “Suicide Squad” was wholly unique and probably won’t be, as it probably shouldn’t be, replicated by anyone else. It honestly feels like  one of DC books that are enjoying themselves. The characters definitely have angst to spare and Zircher’s artwork is incredibly dark, which all works very well, but all that is set against Kot’s hilariously cruel dialogue and plot. It’s having its angst, but not letting that drag the entire book down; a lesson some other DC books could learn something from. Ales Kot, you will be missed; and Patrick Zircher, keep up the damn fine work. Matt Kindt we really like you too.