Another week, another Super-family book. This time its the writers Mike along with Mahmud Asrar with the tales of the Maid of Might, Supergirl! Let’s take a look at the book and its direction. 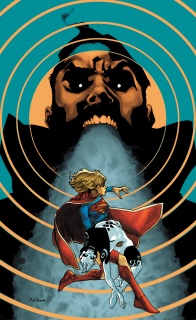 “Supergirl” was the Superfamily book that, when the reboot happened, I had the least amount of faith in. much like Wonder Woman, there wasn’t a definitive take on the character, and every writer’s take seemed to take some pretty big departures from the creative team before them. Even Gates’ erm…sterling reputation on the book, if you pardon the pun, took a pretty severe departure from the previous stories and when Gates left, another change happened which was cut short by the reboot.

Thankfully, with the new 52 (never thought I’d say that), they seem to have reconciled her origins with the core of the character and done away with any silly sun stone powers. It’s a fresh start for the character, which is unexpectedly fitting, looking back at the previous issues. She’s since been starring in the most consistently entertaining book with an \S/ on the cover, even surpassing the much hyped “Action Comics” by DC’s flagship writer, Grant Morrison (sorry Geoff). It’s been that good.

However, there are still some curious choices by the writers Mike when it comes to the plotting of the series, and that’s specifically the how decompressed the stories have been. It’s nine issues in and we’re only just now starting our second arc in the series, and even then, it takes place on the same day as the first arc. There’s a LOT happening to a girl who just arrived on the planet less than a week ago, from fighting world killers to now fighting the Black Banshee. She doesn’t know a thing about the world she’s currently on, and it’s been nearly a year. thankfully, she’s at least made a friend.

Which brings us to my favorite part of the review: the characterization of Kara’s new friend Siobhan and her father. Siobhan is actually my favorite part of this book because she’s a true re-imagining of the character Silver Banshee. Where the Silver Banshee of years gone past has been a sort of tragic villain, cursed by Irish magics that gave her her abilities and appearance, this Silver Banshee is fresh on the scene and isn’t a hero or villain. In fact, she just wants to live a normal life among humans, which is something her father, new character Black Banshee, wants to make sure she doesn’t do. His goals include turning his daughter to the dark side (so to speak) so he can try to take over the world. Which is to say that seems like a rather silly goal when there are characters like Superman and Wonder Woman rolling around. Even in such a young universe, heroes would earn reputations fairly quickly. Especially if they could knock over building with a single punch, or you know, take on an alien invasion. Unfortunately, it actually feels a bit like Kara’s development has stagnated, focusing instead on the characters guest starring. Instead, her development is mostly in her reactions to her new-yet-familiar powers, which is something we’ve seen before.

One of the strongest points of the book happens to be the art, from artist Mahmud Asrar. His design of the Black and Silver Banshees are fun to look at and complement each other well. You can see why Daddy thinks his daughter should take up his mantle. Even aside from that, they both look like something that should be frightening. Siobhan Banshee is definitely feminine, but still retains that familiar skull-like face, while also possessing short hair, which give her a stark new look when compared to the old Silver Banshee. As for Black Banshee, he’s just terrifying. But character designs asie, the book never feels frozen, with exciting action frames that not only capture a moment in time, but make it feel like it’s happening right in from of you. In addition, the inking and colors give the characters an extremely vibrant feels to them that make the book a treat to behold, visually.

While this book isn’t perfect, it still one of the most consistent Superbooks on the market. At least it will be until I see if my hopes and dreams for “Superman Family Adventures” comes true. Check it out if you like Supers and Irish folklore.