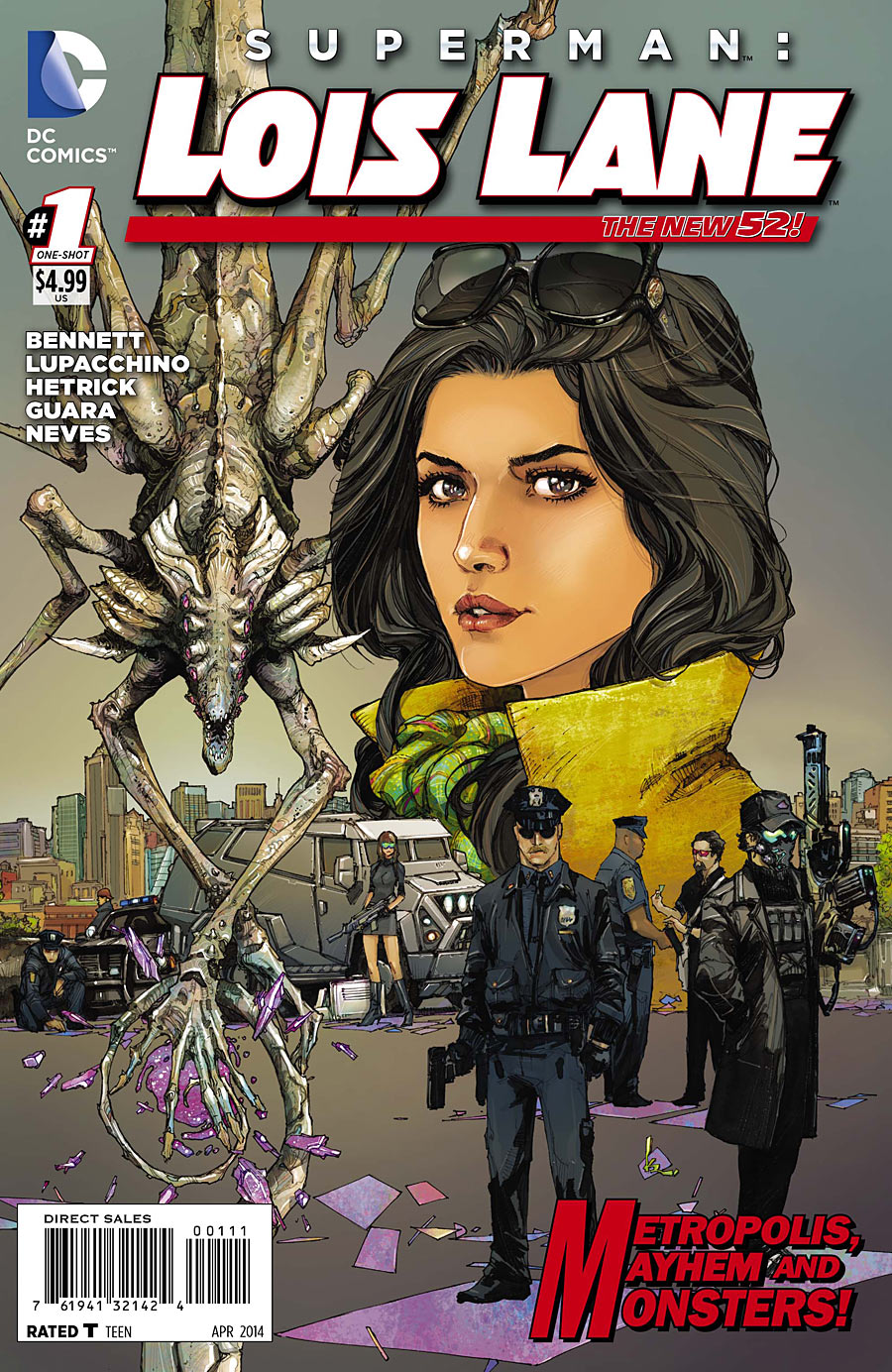 The first lady of comics, Lois Lane, is finally getting her time in the limelight in the New 52 with her own one-shot courtesy of Marguerite Bennett and a boatload or artists. And, surprisingly for a New 52 comic, it doesn’t see fit to ruin an important character’s legacy by making all gritty and such. Fancy that. 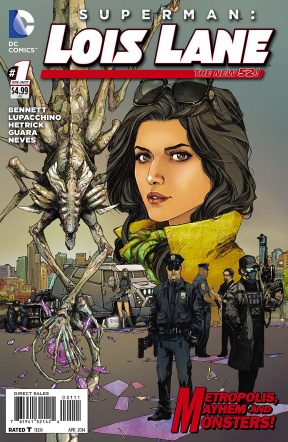 Written by Marguerite Bennett
Illustrated by Emanuela Lupacchino, Meghan Hetrick, Ig Guarra & Diogenes Neves
Lois Lane is known for chasing down stories — but what happens when the story is her family? As her father gains more power in the government, Lois’s sister Lucy has become involved with a deadly drug scene! Meanwhile, Lois thought she was rid of the influence of Brainiac, but now she finds that the the computer tyrant of Colu is calling out to her again!

Marguerite Bennett’s first foray in the New 52 was rather well-received, even if I do say so myself, and really showed that she could be a force to be reckoned with at DC. Since then, though, she’s been relegated to a mostly well-received if over-editorialised Villains Month issue and these two one-shots, with the companion to this one being the Joker’s Daughter. What I’m trying to say is that Marguerite Bennett is has the potential to really work magic if they’d give her the right material to work with. Which brings us nicely to “Superman: Lois Lane”, which is exactly that.

But first, a disclaimer: there are no less than four pencillers who worked on this comic. Understandable, because it’s an extended one-shot and there are multiple story sections that include flashbacks that benefited from multiple art styles. You know what doesn’t benefit, thought? The fact that the credits for the issue do not make it, in any way clear, who drew what part of the issue. So, when talking about the art, I’ll be talking about the pages without knowing who even worked on them, unfortunately. Hey, DC? This is why Marvel has a credits page. You don’t see this happening on the last two issues of “Young Avengers”.

With that out of the way, though, we can get to the issue at hand. While the problem that ultimately plagues this issue is the fact that it never quite takes as many risks as you want it to, it still adds up to a solid story about a character that has oft been overlooked in the new DC status quo. When it works, it allows Bennett into the mind of Lois Lane and really show who she is now (something that actual Superman books never got around to doing) and how she fits into the New 52. Not only does Bennett get to show the fearless reporter side of Lois, who jumps headfirst into danger without caring, but she gets to explore Lois’ family through her sister and through flashbacks to her parents. With moments like the background details of Lois’ apartments and the flashbacks to her childhood, Bennett gets to explore Lois’ estrangement from those closest to her (including the big boy in blue) and that’s really when this issue works best. It’s a character piece for a character everyone else seems to have forgotten about.

However, when the issue doesn’t work, it ends up falling into the same traps most New 52 stories do. While the tone of the issue is much lighter than most books DC are putting out, falling closer to Greg Pak and Aaron Kuder’s “Action Comics” than anything else, there’s still that one thing missing. Perhaps this one is just on me, but I almost didn’t want Superman to show up here because it would be a sore reminder of what has been lost between the two characters. Not just a relationship, but a friendship to. Not only that, but outside of the exploration of Lois’ character and the hook of her relationship with her sister, the story never really goes anywhere. Perhaps it’s a lead-in to a Lois-focused ongoing, which I still wouldn’t say no to at this point, but it feels like there was never a chance to wrap things up properly. The book works when Bennett gets to explore the characters and the emotional hook that is Lois’ relationship with her sister, but the actual story feels like it was tacked on just to connect those elements.

And now, the part that makes this issue a struggle to review: the complete lack of communicating which artists drew which sections of the issue. There are four pencillers credited for this issue – Emanuela Lupacchino, Meghan Hetrick, Ig Guarra & Diogenes Neves – and as many inkers, yet the credits page doesn’t credit the pages they drew to their names. That means that unless you were so attuned to each artists’ work that you could tell the difference by sight, which I’m sorry to say I can’t, then you’re in the dark as to who drew what. Which is frustrating because I want to credit each artist because they do great work on this issue.

The sections set in the present feel attuned to the same style as Aaron Kuder’s work on “Action Comics”, breaking away from the drab and dreary house style for something lighter in tone without feeling cartoon-y. Juxtaposing that with the much lighter inked and freer style of the flashbacks creates an almost rose-tinted affect that really speaks to the theme of the issue: nostalgia. The artwork for the issue is great, playing to the strengths of the story and bringing it all together in a package that eschews the darkness of the New 52 for a tone that fits the character. It just had to be ruined by the fact that the artists weren’t credited with the pages they drew.

Overall, this is hopefully the issue that both Bennett and Lois Lane needed. It showed that Marguerite Bennett could tell a story like this and make it interesting through her excellent character writing and it showed that Lois Lane could be the focus of a story like this instead of in the background of any number of Superman stories. Not only that, but any one of the artists featured here could follow Bennett and Lois Lane to an ongoing series (as long as they’re credited properly) and it could stand out against the rest of the New 52 as a unique series. If this was to be seen as a pilot of sorts for a Lois Lane ongoing, I would wager it should be greenlit for a season. If not, then it’s still a good issue that paid its dues to a great character and her long legacy from a writer who is capable of more than this and a team of artists who were undercut by editorial.

Final Verdict: 7.2 – Despite it’s problems, both in and out of the story, it’s still an issue worth checking out especially for fans of Ms. Lane.